Congress And Drought Are 'Twin Brothers', Wherever The Party Will Go There Will Be Drought, Says PM Modi 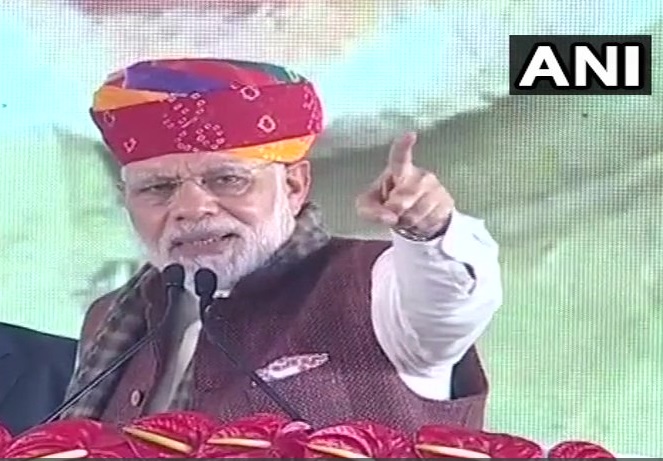 Prime Minister Narendra Modi on Tuesday said the Congress Party and drought are 'twin brothers' as wherever the party goes, there is drought.

Lashing out at the grand old party during the inaugural ceremony of an oil refinery in Rajasthan's Barmer, the Prime Minister said, "Congress and drought are 'twin brothers', wherever the party will go there will be drought only. Some people mislead citizens often. Their misleading the nation on Barmer refinery is not the exception, but the norm. There are several such areas in which they have been misleading the nation for years".

He added that the previous government allotted Rs. 500 crores for One Rank, One Pension (OROP) even after knowing that this number is not the accurate figure.

"Is this the respect they had for the armed forces? For 40 years, nothing was done about OROP. Before the 2014 elections, a token sum was allocated towards OROP even when it was widely known this sum is unrealistic and too less. It was our commitment to make OROP a reality and we worked towards making that possible," the Prime Minister asserted.

He further said that when the Bharatiya Janata Party (BJP) assumed office, one of the first things it did was to see what work has been done on the promises in the Railway Budget.

"Just for a few claps in Parliament, some people made promises they could never keep. We were determined to end that culture of misleading. The manner in which Chief Minister Vasundhara Raje has managed the drought situation during both of her terms and helped the people is commendable. It is in contrast to the opposition in the state whose poor drought management in Rajasthan is widely known," Prime Minister Modi added.

He asserted that this is a time for 'Sankalp Se Siddhi', "We have to identify our targets and work towards achieving them by 2022, when we mark 75 years of freedom".

The state of the art refinery will be first of its kind in the country.

The refinery is expected to change the growth landscape of Rajasthan and western parts of the state in particular.

The project, which is a joint venture of Hindustan Petroleum Corporation Limited (HPCL) and Rajasthan Government, is worth Rs. 43,000 crore.

The project will generate employment in the state as well. (ANI)