While high rates may reduce inflation, they will affect borrowers who are already suffering from pay cuts and job losses. There is a growing concern among people on how the new rates will affect their lives.

The repo rate is the interest rate RBI charges when they lend to commercial banks, while reverse repo is the rate at which the central bank takes money from commercial banks.

With pay cuts and job losses coupled with growing inflation since the Covid pandemic hit, there is growing concern among people on how the new rates will affect their lives.

How Do Repo Rates Affect Inflation?

RBI last changed the rates in December 2020. Since then, the repo rate has been kept unchanged at 4 per cent and reverse repo at 3.35 per cent, but the inflation rate has changed drastically over the past one year.

Typically, during inflationary periods, the central bank increases the repo rate to discourage commercial banks from borrowing funds, thus reducing the supply of money in the economy and bringing down the inflation rate eventually.

On the other hand, ideally, a low repo rate should translate into low-cost loans for the general masses. When RBI slashes its repo rate, it expects the banks to lower their interest rates charged on consumer loans.

Is That Happening In Practice?

“Repo rate changes target inflation. But RBI is very unlikely to increase the repo rate now as the primary focus is on growth. With the risk of Omicron affecting the GDP, the economy may again be impacted. Thus, in such a situation, it is highly unlikely RBI will increase or decrease the repo rate. Moreover, one needs to keep in mind that the Monetary Policy alone can’t bring down inflation,” says Madan Sabnavis, chief economist, Care Ratings, a credit rating agency. He points out how inflation continued to rise even when RBI reduced the repo rate (see graphic). 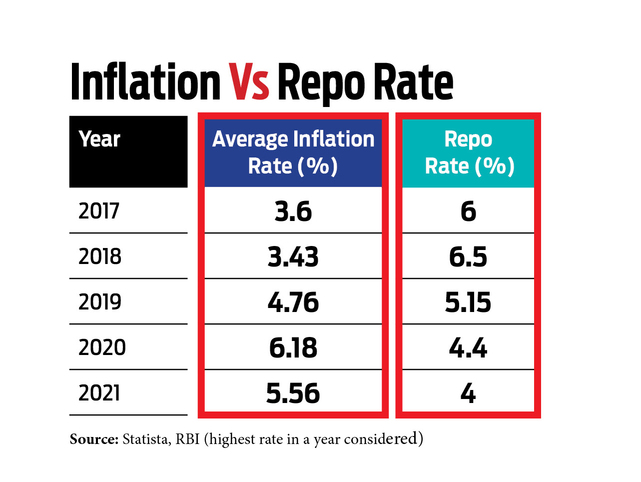 Repo rate was reduced from 6.25 per cent in February 2019 to 4 per cent in May 2020, while average inflation continued to rise during that phase. There was a fall in inflation rate between 2017 and 2018, while RBI increased the repo rate.

“There has been inflation and the prices of goods have gone up due to multiple factors like global commodity prices going up, taxes being increased, raw material costs going up etc. The ongoing inflation is due to supply rather than demand side issues. So, even if hypothetically we consider that repo rate is reduced and the inflation continues (as it is not under the control of RBI), people will start borrowing money to buy goods and it will further accelerate inflation,” says Sabnavis.

Recent data published by the Ministry Of Statistics And Programme Implementation shows that between 2020 and 2021, inflation has come down in various sectors like food and vegetables, yet there is an overall rise in inflation because of various other sectors. For example, while inflation rate has gone down by nearly 20 per cent for vegetables, it has hit the highest in oils and fat food items, with an increase of around 34 per cent.

What Do Consumers Expect?

While on the one hand, people are concerned about inflation, on the other, those who have loans don’t want the repo rate to go up as they may end up paying high interest rates. “I feel like a balance needs to be struck. Currently, the majority of the cost of a retail item is dominated by indirect taxes. The economic policy should focus on making sure more money is available in the hands of the citizens such that increased expenses can be set off. It’s the cash in hand that matters. The higher the liquidity, the lower the problems will be,” says Saurabh Bhadwar, 26, an IT professional from Bengaluru.

However, some others want the repo rate to go down as they believe paying EMIs or even applying for a loan has become difficult during a time when the job market is uncertain and there have been salary cuts.

“When I was looking for a property loan, the bank was demanding high interest on property loan that was not affordable. So, lower interest rate may make it a little easier for us to avail loans,” says Akash Kumar Sharma, 27, a medical executive from Delhi.