Pipelines or pipedreams? Kashmir and other issues now certainly include cricket and business, eh? 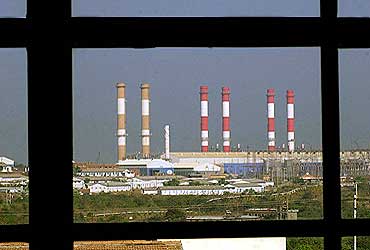 They are calling it pipeline diplomacy. The forthcoming Musharraf visit has triggered off what is called energy diplomacy between two warring neighbours in the region and it has also revived the great Asian pipeline dream.
As a result, a host of multinationals are currently in negotiation with both Islamabad and New Delhi for their dream project.
Besides, India is under pressure from Iran for the Pakistan and Turkmenistan pipelines. PMO insiders claim India has agreed to the project and that the Prime Minister has overruled objections from the MEA, MoD and even his National Security Advisor Brajesh Mishra.
But this news is unlike earlier reports. Having lost out on the Pakistan pipeline project, Reliance is currently exploring options for a separate pipeline from South Pars, Iran's southern offshore, to Gujarat in collaboration with Iran Oil and British Petroleum, which has already commissioned a $10 million feasiblity study.
The Iran-Pakistan-India pipeline will be constructed by a consortium which will have BHP, Totalfina, an Iranian oil company and Crescent Petroleum of Pakistan.
A cash-starved Islamabad (whose forex reserves are down to $900 million) has already agreed to the Indian offer of $600 million transit royalty every year for the pipeline, both for the pipeline from Iran and the one from Turkmenistan.
As a result, there are chances that Gen Musharraf and Vajpayee will make a formal announcement of the same during the former's State visit.

The case of Petroleum Secretary P Shankar's transfer is becoming murkier by the day. Last week during an evaluation meet, Minister Ram Naik discovered that Shankar (who is shifting to Chennai to assume the mantle of Tamil Nadu Governor) had written a detailed note that the government -- keeping in mind the hydrocarbon disinvestment programme -- must get a successor who can stay for at least four years. This, claim insiders, has caused tremendous confusion, ostensibly because the two hot contenders for the post -- Power Secretary A.K. Basu and Telecom Secretary Shyamal Ghosh -- do not have more than two years in service.

The news has, nevertheless, pleased Ram Vilas Paswan who is extremely reluctant to release Ghosh. Basu, last heard, was checking out from Bengali bureaucrats about life in the Marxist-ruled Eastern Indian State where the Chief Secretary's slot will be up for grabs in a few months time. Meanwhile, confusion reigns in Naik's office over Shankar's successor.

If Hindustan Lever Limited (HLL) can have success with Modern Foods, why should other FMCG giants like Britannia and Nestle SA be left behind? Not really. Recently, the two giants approached the relatively, low-profile Delhi Milk Scheme (which has a significant share in the Delhi milk market) for marketing their milk-based products from DMS outlets. But, last heard, the move had boomeranged because Agriculture Minister and Samata Party leader Nitish Kumar has put a spanner in the works, asking DMS officials to avoid any such agreements (lest NDA again draws flak). But what would the flak be for? Selling off the desi doodhwala?

Has the Enron crisis caused permanent tension in the minds of the Power Ministry (read Power Minister Suresh Prabhu)? Otherwise, why did Prabhu call a presentation from as many as eight public relations agencies last month? And the most crucial part of the soon-to-be-given-assignment? A weekly newsletter which will list all achievements (!) of the Ministry and updates on the power situation in all the States and Union Territories. But what the agencies did not realise is that Prabhu wants the State Power Ministries to also contribute towards this new PR budget, a move which has surprised many. After all, there are very few Indian States which would love to list their achievements in the power sector. Last heard, the agencies were still waiting with bated breath.