'I do not want to say we have a better team than Pakistan, but if we play anything to our potential, I believe we will win. We have the players to do it' 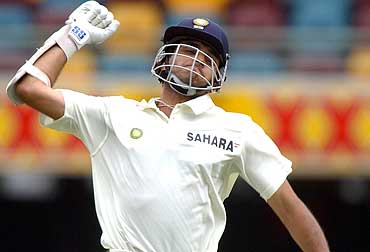 Indian captain Saurav Ganguly believes his young team had a "big-time" chance of recording their first-ever series win in Pakistan during their historic tour next month.

"I think our recent overseas record, especially the tour of Australia, has given us the confidence to believe that we can do well," he said.

"I do not want to say that we have a better team than Pakistan, but our recent performances suggest that we have a very good chance, if we play anything to our potential, I believe we will win. We have the players to do it," Ganguly told a news channel.

Ganguly said batting would once again be the key to India's fortunes.

"I always believe that if you can put up 500 runs on the board, then it becomes that much easier to put pressure on the other side. We proved ourselves in Australia, I do not see why we cannot repeat our success in Pakistan."

The Indian captain was a trifle worried with the fitness of some of his key bowlers. "We need a fully fit Zaheer (Khan) and (Anil) Kumble. That will be very important. Kumble has a good record
against the Pakistanis and Zaheer gives us firepower."

Ganguly also said that Railways' off-spinner Kulamani Parida was the best replacement for Harbhajan Singh. "Parida turns the ball a lot and has taken a lot of wickets in domestic cricket. He could be someone who could give us more options."

Ganguly claimed that his team would be under no additional pressure in Pakistan, saying every tour had its share of pressure.

"Every tour has its fair share of pressure, there was equal pressure ahead of the World Cup. I think we should be seen and judged for the cricket we play. We are not politicians, we just want to play cricket and do well on the field," Ganguly said.

Ganguly admitted that there is still a fear factor that shadows the team's tour to Pakistan. "The fear factor will remain right through the tour of Pakistan and we cannot get away from it. We are concerned about security, but it is something that we have to just sit down together and learn to live with.

"We had read a lot of stuff on the net about the situation in Pakistan, and we were naturally worried," he said but added that "We had never said that we would not tour Pakistan. We have always been very keen to tour the country."

The captain wanted his team to "enjoy the tour" which may be a little "difficult given the security constraints. "We may like to see Pakistan and enjoy the tour to whatever extent possible. Unless you enjoy your cricket, it becomes very difficult to play good cricket."

Striving To York Them