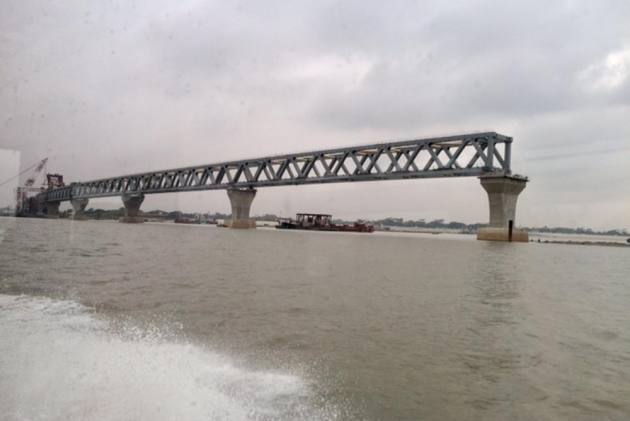 Rabindranath Tagore often visited his tenants in Kushtia, Rajshahi and Pabna—now in Bangladesh—on a boat across the Padma. His journeys straddled two centuries, the late nineteenth and early twentieth. Cut to the 21st century. The bard’s long gone; the places remain, albeit with signs of modernity sweeping through the landscape. The options would be plenty for Tagore today, if he sought to swap transport. He could take a train, or a car from his ancestral home at Jorasanko in Calcutta, and reach his destination crossing a gleaming steel and concrete bridge across the Padma—the second most unpredictable and treacherous river in the world after the Amazon.

The bridge is part of a $3.9 billion Padma river railroad project, which is scheduled to be operational by mid-2019. It will be a two-level steel truss composite bridge—the top deck to accommodate a four-lane highway for vehicles and the lower deck for a set of railway tracks. Bangladeshi prime minister Sheikh Hasina hopes it will bring major turnaround for South Asia’s youngest nation. And this bridge can also be showcased as the Awami League government’s major achievement before parliamentary elections scheduled for December 30 this year.

What it does to the overall economy is for the future to behold, but it will definitely change the life of more than 30 million poor people residing in south and southwestern Bangladesh, who remain cut off from the rest of the country by a turbulent river that looks more like a sea.

At present, all traffic across the Padma has to rely on ferries, which are infrequent and often unsafe. It takes more than two hours to cross the river, 6km wide with strong current, on boats that are mostly overloaded with people and vehicles. But the country’s biggest-ever infrastructure development project that will bridge the Padma—the theme of countless folklore and Bengali literature—is holding out hope, although positive news rarely makes good headlines, which may explain why Bangladesh receives little attention.

Bangladesh has 165 million people, the eighth most populated country in the world. That’s Britain, France and Canada combined. It has the world’s fourth largest Muslim population, behind Indonesia, India and Pakistan—and the numbers are growing fast. Very fast indeed. Economic growth reached 7.1 per cent last year and has exceeded 6 per cent for two straight decades, lifting 50 million people out of extreme poverty in the process. Looking ahead, PricewaterhouseCoopers expects Bangladesh to be one of the world’s three fastest-growing economies through 2050, trailing only India and Vietnam. 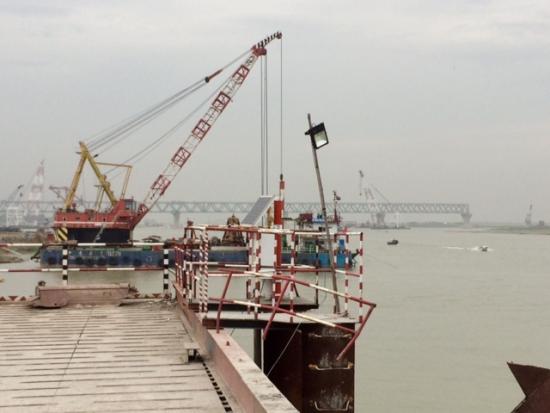 Buoyed by the steady GDP growth and augmented by remittances from Bangladeshi expatriates and garment exports—the country is the second largest exporters of stitched clothes in the world—running into billions of dollars annually, prime minister Hasina is betting big on the 20-km-long railroad bridge project on the Padma.

Bangladesh, once written off as a “basket case” by the former US secretary of state Henry Kissinger, is on the verge of completing this project without aid from any foreign nation, says Dhaka-based political analyst Dr Shafiul Alam. “It will be a game-changer for Bangladesh’s economy and a great boost to its national pride,” he says.

In January 2012, Bangladesh withdrew its request for funding from the World Bank for the bridge that will connect 21 districts to the country's mainland as well as the road and port connectivity with neighbouring India. The prime minister took the bold step after two years of haggling with the global lenders after the World Bank suspended its proposed $1.2bn line of credit for the bridge, alleging corruption in awarding the project consultancy to Canadian construction giant SNC Lavalin.

Citing "misconduct" in the Padma project, the global lender banned SNC Lavalin and its 100 affiliates from bidding for any World Bank-funded projects.

With the general elections then barely a year away, Hasina lost patience with the global lender and decided to do the project with national funding. Economists in Bangladesh say the bridge will boost the nation’s GDP growth by 1.5 per cent every year. Analysts say the mega-project was a huge challenge for the Awami League government to find alternative financing matching the interest rate and repayment schedule offered by the World Bank. By deciding to undertake the 6.15km road and rail bridge with its own resources, Hasina has displayed bold confidence and proved critics wrong, some of them say.

It will be one of Bangladesh's major transport corridors linking Dhaka to the country's south and west, as well as linking Bangladesh with India, Nepal and Bhutan besides enhancing regional trade and collaboration along the Asian Highway No. 1 and the Trans-Asian railway network. The bridge will connect multi-lane expressways and railway lines with Dhaka to Bangladesh's largest deep-sea port at Paira, which policy-makers say, will act as the nearest sea port for northeastern India, Bhutan and eastern Nepal.

Besides, Hasina displayed smart diplomacy as she kept China out too despite an attractive offer. India, which is Hasina's most reliable ally, was initially upset over the Chinese posturing because it was seen as another attempt to expand China’s footprint in the subcontinent, says Dr Arifin, a former vice chancellor of Dhaka University. "It was a smart move as the Hasina government knows India would fume if Bangladesh accepted Chinese investment. It was something Hasina could ill-afford."

And keeping in view that the 2014 general elections were a year away and also waiting for the Indians to implement a land boundary agreement with Bangladesh and sign a water-sharing treaty on the Teesta river, the Bangladeshi PM in December 2013 called off funding from China, Arifin says. “Rejecting the Chinese offer after Beijing has already agreed to fund the deep sea port at Sonadia was also smart diplomacy for Hasina, as it does not upset India and also helps her push for the crucial Teesta water treaty, which remains a sticking point in the two neighbours’ bilateral relation.”

This apart, beset by a series of strikes and increasingly violent protests related to the war crime trials seeking justice for crimes during the 1971 civil war, the ruling Awami League was banking on a surge of national pride to wriggle out of a tight corner. "The war crimes trials have given Bengali nationalism a new lease of life and funding the Padma bridge with its own resources added more steam to that," says another analyst.

The project—construction of which was delayed by three years—will connect Bangladesh's principal sea ports and link it to the Dhaka-Chittagong Highway, besides generating remarkable impacts for the whole country and contributing to the economic development of the southwest region. An eight-lane expressway approaches the bridge on the two banks in the north-south direction starting at Mawa on the Dhaka side and ending at Janjira on the other side of the river in Shariatpur district. Once a railway line on the bridge is connected with the existing railway network, it can contribute to the formation of a multi-modal international transport network for the eastern region of India, say analysts.

Once completed, the project will cut travel time from Dhaka to Kolkata by about five hours. The 215-km railway line will be elevated and once the link, which will pass via the bridge, is complete it will take just about three hours to get to the southern city of Khulna from Dhaka. Currently, it takes more than nine hours to cover the distance of 412-km from Dhaka to Khulna. The distance will be reduced to 213-km, besides the rail link will significantly reduce travel time between Dhaka and Kolkata.

The distance from Khulna to Kolkata is approximately 124-km via Benapole, a border town in Bangladesh and the most commonly used crossover when traveling between Kolkata and Dhaka by road or rail.

The rail link project also forms part of the Bangladesh-China-India-Myanmar Economic Corridor (BCIM), another key channel of the Belt and Road Initiative. Once completed, the BCIM corridor will link Kolkata with Kunming in southwestern China's Yunnan province.

A railway wagon or a bus or a truck from Agartala or Silchar towards India's mainland will take the Padma bridge route and Bangladesh is giving priority under the South Asia Sub-regional Economic Cooperation (SASEC) platform for the revival of railway connections between India and Bangladesh at the places that used to be functional in the 1940s, Bangladeshi officials say. The Bridge will revive the pre-1947 lines as well as the new line from Dhaka to the economic hub of West Bengal, which have endless viability, some of them say.

But the project has been a huge challenge as the mighty Padma carries huge volumes of sediments making its bed soft and tricky, building a bridge on it depends on controlling its behaviour. “Construction of the main bridge is not a challenge. The most difficult part is river training as river erosion takes place frequently,” says a senior official at the Bangladesh ministry of road transport and bridges, the ministry overseeing the construction. Due to this challenge, engineers have to install 120m-long pillars, which is unusual for any river bridge in the world, he says.

Fearing terrorist attacks on the bridge, the Awami League government has raised two new battalions under the Bangladesh Army’s 99 Composite Brigade (99 COMBDE) comprising two infantry battalions and an engineer construction battalion and also setting up a cantonment and army camp on either side of the river near the project for ensuring security.