Journalist Kavitha Jakkal and activist Rehana Fathima were on the verge of creating history when a human barricade of Priest and Devotees awaited them. 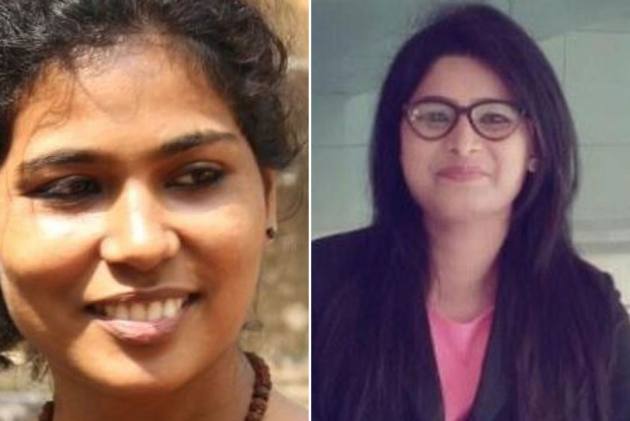 At the outset of the Supreme Court’s September 28 verdict allowing women (of the age group of 10 to 50 years) to enter the Sabarimala temple in Kerala, two women on Friday under heavy police protection were almost on the verge of creating history. Hyderabad-based journalist, Kavitha Jakkal, and activist, Rehana Fathima, were shielded by over 100 personnel from the Kerala police as they trekked through the hill in a two-hour journey.

Amidst protests and heavily charged sentiments, they managed to negotiate through verbal abuses and heckling by the ‘devotees’ upto ‘Patthinettam padi,’ the eighteen-divine stairs, that lead to the temple’s sanctum sanctorum for darshan of Lord Ayyappa. However, the five-feet wide entry was easily blockaded by the devotees, including the priest who discontinued the ongoing rituals, threatened to shut down the temple and staged a sit-in on the stairs along with the protesting devotees. Despite the negotiation by the Inspector General of Police (IGP) S Sreejith, the devotees did not yield to the Supreme Court order.

But activist and model Rehana was undaunted by the protestors and demanded that she be allowed to complete the final leg of her journey. The 31-year has already been under the social media scrutiny since September 30, after she boldly posted a 'selfie' on Facebook donning black attire and 'mala' (Holy beads) with a caption "Philosophy".

In 2014, Rehana who was widely identified with anti-moral policing campaign 'Kiss of Love' in Kerala, earlier this year took on to social media again. This time she appeared topless and covered her breasts with watermelons in retaliation to derogatory remarks of an assistant professor in Kerala - who drew the sexiest parallels between women’s breasts and watermelon.

During 2016 Onam, Rehana had become the first woman to perform the traditional dance form, Pulikkali (Tiger dance). In 2018, the mother of two and an employee of BSNL, Kochi, has starred in the film, EKA, in 2018. Rehana, whose Facebook profile says 'Break the rules' has maintained that she observed 41 days’ fast as required by any devotee.

Unlike Rehana, Hyderabad-based 24-year old journalist Kavitha Jakkal was sporting full riot-gear and a helmet, similar to the ones worn by the police enroute to Sabarimala. A native of Nalgonda in Hyderabad and a reporter with MOJO-TV, Jakkal marched toward the ‘Patthinettam padi’ along with her crew before she along with Rehana were met with the blockade of devotees. 'She reportedly told the TV channels that she was just doing her job as a reporter and was not a devotee.’ However, the plea did not yield any passage to the shrine.

Later, the chief priest of Sabarimala Kandararu Rajeevaru joined the human-barricade at the stairs. He said that he will be forced to shut the temple and return home if the age old traditions of the temple are violated.

Meanwhile, overcome by devotees grievances, Devaswom Minister Kadakampalli Surendran also gave a media statement that the police must maintain caution and not hurt the sentiments of the worshipers. "While police must protect the interest of true devotees, the SC order must not be misused by activists to show their power," he said.

In consultation with the police, the women decided to retrace their steps and vacate the premise along with the security cordon. Kavitha told the waiting reporters that she felt 'proud of her accomplishments' and may return again.

Another woman, Suhasini Raj from the South Asian Bureau of the Newyork Times, attempted to climb the mountain surrounded by police escort, however faced with similar human fortification by the devotees at Sabarimala. She along with her associate returned. Later, speaking to news agency, IANS, Suhasini said: "I had reached half way and then the protests grew stronger. I was hit by a stone and then we decided to return. The police had provided us all the security".

Mary Sweety, 46, a native of Thiruvananthapuram, was escorted to safety when she reached Pamba bus-stop. "I had this strong calling from the divine to visit Sabarimala. I did not demand police protection. When I reached Pamba, I was told by the police to return," she said.

Meanwhile, Rehana's house at Kochi was vandalised by two unidentified people. She told the media that she was concerned about her two children.