A Hindi Star She Was, But Tamil-Born Sridevi Was Effectively A Malayali For Her Audiences In Kerala

The butterfly girl of Malayalam who swung between languages with amazing ease. She had made her path to glory even as she shone equally well in Telugu. A look at the late actress’ southern trail 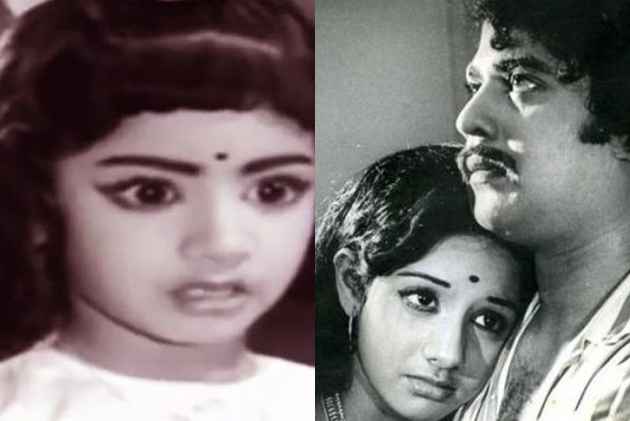 The contrast was stark, almost unbelievable. For, someone cast as a ‘child star’ in a 1975 Bollywood movie that went on to become a box-office hit, Sridevi is seen, barely two years later, acting as a woman whom men keep vying to marry.

That was down south in a Malayalam film called Oonjaal, where Keralites identified her as what they would always call naadan. That is, the archetypal countryside girl in mainstream ethnic off-white dress—her hairs sporting a small bunch of soft flowers and her head demurely hanging down in front of men (though she can be a bit more talkative in the company of same-age women). This, when, up north, Hindi cinema had noticed her in Julie that starred Lakshmi as a free-spirited Anglo-Indian girl, falling in love with a Hindu boy—a movie, where Sridevi is the little sister of the fiery protagonist. If that work was directed by Malayali K.S. Sethumadhavan, Oonjal (1977) was made by a younger but equally established filmmaker called I.V. Sasi (who died four months ago).

Oonjaal, a Dravidian word, connotes the swing. If one were to take it as a metaphor, Sridevi was even those days nimble enough to breezily sway in and out of different film worlds in her country. For the largely rustic film-going Malayalis of the 1970s, though, she was the girl next door (even as it was in Tamil she began [Thunaivan, 1969] and went on to act till 2015 [Puli]). It couldn’t have been otherwise. For, Mollywood that time had most of its female characters speaking to dubbed voice—so Tamil-born Sridevi’s inability to speak Malayalam was never an issue. In black-and-white Oonjaal, for instance, a 14-year-old Sridevi is seen particularly effusive—seated on a swing in a coconut-palm orchard that has a big group of same-age girls, some of whom are later seen bathing in an open pond and then a brooding protagonist dressed in set-mundu sits against the backdrop of a tall haystack in her agrarian village. There, only the other day, she was cautioned by a tough-sounding local guy (actor M.G. Soman) that only he would wed her—to which she had responded in utter subservience.

No wonder, the patriarchal Keralite tended to believe that Sridevi was actually a Malayali. When informed that she hailed from Sivakasi across the Western Ghats, they found in her another image special about that fireworks town: the household calendars that printed certain new-age paintings of Hindu goddesses that bore a striking resemblance with this stunner starlet. In fact, the same year Oonjal was released, Malayalam saw the release of another movie titled Sreedevi. It didn’t feature the same-sounding actress, but the Sharada-starrer had Kamal Haasan playing a major role. Kamal, like Sridevi, had made Malayalam films the path to subsequent ascension to stardom in Indian cinema.

When the two acted together, linguistic barriers—if at all—blurred for the Kerala people.

That was why Tamil superhit Moondram Pirai (1982) was virtually a Malayalam movie for buffs along the length and breadth of the Malabar Coast. Shot in the scenic locales of a tropical hill station, the 143-minute movie made them laugh out as much as it left them red-eyed after that famed climactic scene soaked in poignancy. Sridevi, as young Bagyalakshmi had suffered retrograde amnesia following a car accident during which it was Kamal (as schoolteacher Srinivas) who took care of her. As she returns home after regaining normalcy, the heroine fails to recognise the very man who had been her companion during that critical phase.

The audiences wept no end on seeing Sridevi’s complete apathy to her man’s desperate bids (on the railway platform) to somehow remind her of their relationship.

That on-screen trip on the train effectively symbolised Sridevi’s chugging out to a vaster world that was distanced the actress from Malayalam cinema. She did show up in a couple of Kerala movies that year, but that was it. True, in the mid-1990s she made a brief reappearance in Mollywood, but by then Sridevi had become a “Hindi actress” for the new-generation Keralite.

In her 26 films Sridevi acted in Malayalam, the first was in 1969 when she appeared in Kumarasambhavam as the trident-holding boyish Balasubrahmanian (lord Kartikeya, the son of Shiva-Parvati) of the Puranas. A year later, in Telugu’s Vidhi Vilasam, he is far less ethereal, playing as a chirpy little girl in a rich bungalow that also has a pet dog. It marked a quarter century’s tryst with her film audiences in Andhra Pradesh—even as her spell in neighbouring Karnataka was brief: the Sandalwood filmdom entertained her in just about half-a-decade from 1975, accommodating him in six Kannada movies.

In the middle of all that, in 1976, Sridevi lives up to the public aspiration of looking like an adult woman—in the Malayalam film Thulavarsham. A love song in it shows the camera moving from showing the heroine (Ammini, a very rooted Malayali name) standing on the floor of her two-storeyed house, then suddenly swinging gay abandon down the branch of a tree and soon seated by a placid lake where the hero comes to lift her up. Malayalam cinema had basically been Sridevi’s springboard—something the actress (1963-2018) would never forget. Only five years before Thulavarsham had film freaks in Kerala seen her act centrally as a sweet girl wearing a frock and engaged in kitchen even as she has great aspirations to study in school. That was in Poompatta (1971). The title means ‘butterfly’. For Malayalam film audiences, Sridevi was always like that lovely creation of the nature with brightly coloured wings. It’s another matter that none expected her life to end prematurely—almost like a moth’s.