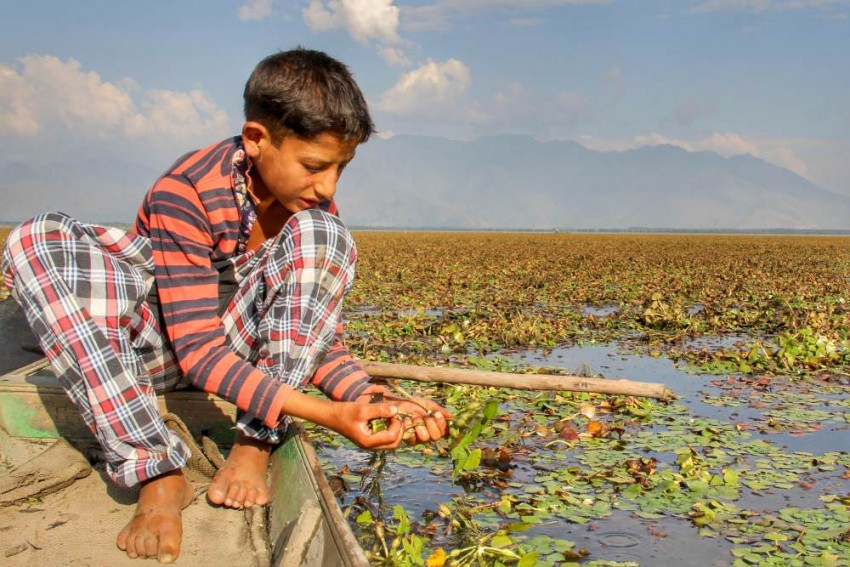 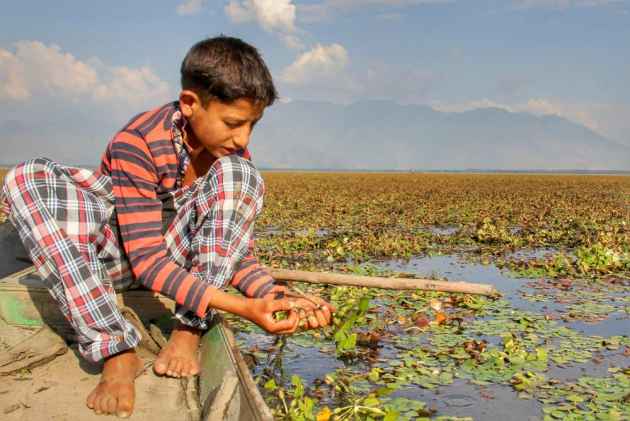 Kashmir , the land of sheer splendid beauty, is also home to rich flora and fauna components.

Apart from its famous crunchy and juicy Kashmiri apples and staggering walnuts, that is driving livelihood of many cultivators, the region is also privy to under-water produces. Nestled in Northern pocket of the Kashmir valley is a freshwater Lake in Bandipora - Wular – that is a treasure trove of water chestnuts or water caltrops. Fed by Jhelum River, Wular is Asia’s largest freshwater body. Water-chestnuts or water-caltrops being the major produce of the area, covers a significant portion of Wular. The lake is also home to a wide variety of fishes. The heart-shaped fruit is scooped out from picturesque floating plants that appear to be natural carpet of mosses covering the length and breadths of the lake. However, not everything is flowery for chestnut cultivators. The fruit usually attains maturity around the month of November—period of bone-chilling winter in Kashmir— and needs to be harvested in tough weather conditions before sending it to the markets. “It’s indeed a painstaking job, and we are bound to collect the water chestnuts to feed our families,” says Ghulam Mohammad. Water chestnut, that falls under the category of a fruit, yields paltry income for the locals who depend largely on them for their livelihoods. Every year Kashmir witnesses hard-hitting periods of cold when the locals largely depend on dried vegetables, cereals that they usually stock during summers. Water-chestnuts, that can be dried and used as ground flour, become a major replacement of cereals during winters. Local farmers have to go through the rigmarole of official processes to get license from the government and the security establishments to grow and sell the product in the market. As a pompous reflection of tainted Sun dances in the water, Wular Lake can be seen abuzz in the early days of September as cultivators flock together rowing their shikaras before returning with the raw water chest nuts in the afternoon. There’s no figure to substantiate, but it is believed that chestnut cultivation is providing bread and butter to around five-thousand people from the state. As the landscape in the Kashmir valley is changing at a rampant rate owning to the population expansion, the natural resources have suffered the biggest blow. Development requirements and growing need for shelter have lead to thinning of paddy fields and orchards. Lakes are not spared either. Much of the lake has been drained as a result of willow plantations, illegal constructions on the lake shore since the 1950s. “We are vehemently requesting the government to take measures to contain illegal encroachment near the lake which is not only a nature’s gift to us but also holds historical importance,” said Syed Zahoor, a student.