Afghans rushed onto the tarmac of the capital's airport on Monday as thousands tried to flee the country after the Taliban seized power with stunning speed. 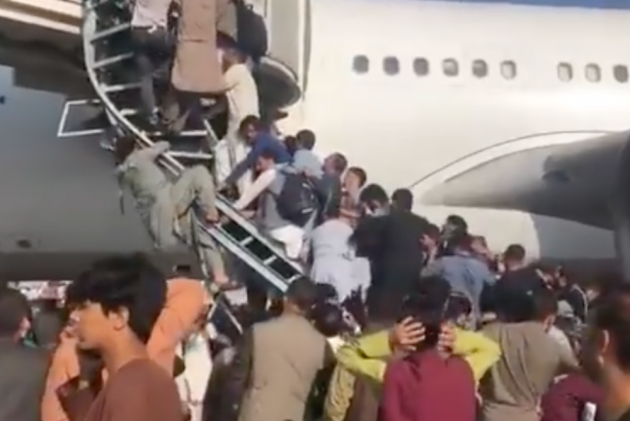 Senior US military officials say the chaos at the Kabul airport this morning left seven people dead, including some who fell from a departing American military transport jet.

The officials spoke on condition of anonymity because they were not authorized to publicly discuss ongoing operations.

Afghans rushed onto the tarmac of the capital's airport on Monday as thousands tried to flee the country after the Taliban seized power with stunning speed. Some clung to the side of a US military plane before takeoff, in a widely shared video that captured the sense of desperation as America's 20-year war comes to a chaotic end.

Watch: Thousands of Afghans came running to the tarmac in Kabul airport in hope of flying out of the war-torn country#Afghanistan #AfghanistanBurning pic.twitter.com/VctHL6SLOV

Story Of Three Afghan Bravehearts Who Escaped The Dreaded Taliban

'Happy To Be In India': Delhi Afghans Fear For Families Back Home

Another video showed the Afghans falling as the plane gained altitude over Kabul.

You have to be from Afghanistan or Iran to understand the fear of Islamic regimes that you prefer trying your luck hanging onto the wheels of a military plane than living under sharia laws. Our fear is rational. pic.twitter.com/mO793hsIgP

Afghanistan has plunged into crisis as the Taliban insurgents moved towards the capital city Kabul at lightning speed following the US troops pull out. On Sunday, the Taliban entered Kabul and hours later they captured the abandoned presidential palace. President Ashraf Ghani has already left the country, sparking outrage within and outside the country.