Wildfires are common in Turkey's Mediterranean and Aegean regions during the arid summer months, although some previous forest fires have been blamed on arson. 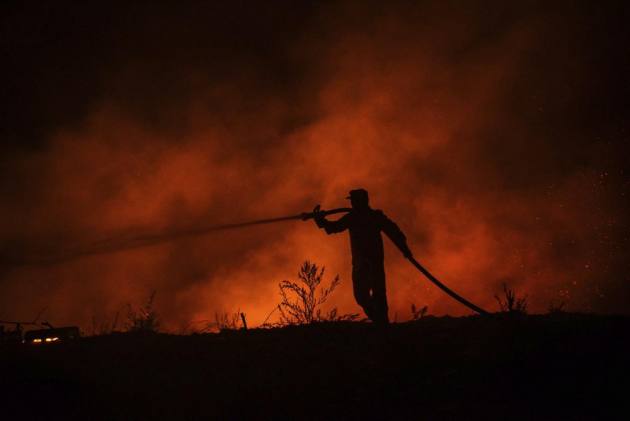 The death toll in a string of wildfires raging in southern Turkey rose to four, officials said Friday, as fire crews continued to battle blazes that burned down homes and forced people to evacuate settlements and beach resorts.

Firefighters were still tackling wildfires in 20 locations in six provinces in Turkey's Mediterranean and southern Aegean region, Agriculture and Forestry Minister Bekir Pakdemirli said. More than 50 others wildfires that broke out since Wednesday amid strong winds and scorching heat were extinguished.

The minister said it was too soon to declare that the current fires were under control, but insisted the fire crews were making good progress.

The worst fires were in the Manavgat and Akseki regions, in Antalya province, where strong winds pushed the fire toward settlements on Wednesday. An 82-year-old man and a married couple died, more than 50 people were hospitalized and dozens of homes were incinerated. More than 25 neighbourhoods or villages were evacuated.

Meanwhile, a 25-year-old volunteer died in another fire near the resort of Marmaris, about 320 km (200 miles) west of Antalya late on Thursday, raising the death toll in the fires to four. State-run Anadolu Agency said the man was taking drinking water to firefighters, but was involved in a motorcycle crash and perished in the fire.

The mountainside fire in Marmaris briefly threatened holiday homes and hotels on Thursday while guests at a luxury hotel in the Aegean beach resort of Guvercinlik, near the town of Bodrum, were evacuated in boats, reports said.

Authorities on Thursday launched investigations into the fires and Fahrettin Altun, a top aide to President Recep Tayyip Erdogan, said “those responsible will have to account for the attacks against nature and forests”. The mayor for Marmaris said he couldn't rule out “sabotage” as a cause for the fire there.

Wildfires are common in Turkey's Mediterranean and Aegean regions during the arid summer months, although some previous forest fires have been blamed on arson or outlawed Kurdish militants.

In other provinces, authorities declared a ban on people entering forests in a bid to prevent more fires.