Claymodeller Kaushik Basu claimed that the idol was 10-feet long and made a bit taller than the standard size as requested as overseas idol sales saw a revival this year after lifting of Covid-19 restrictiopns. 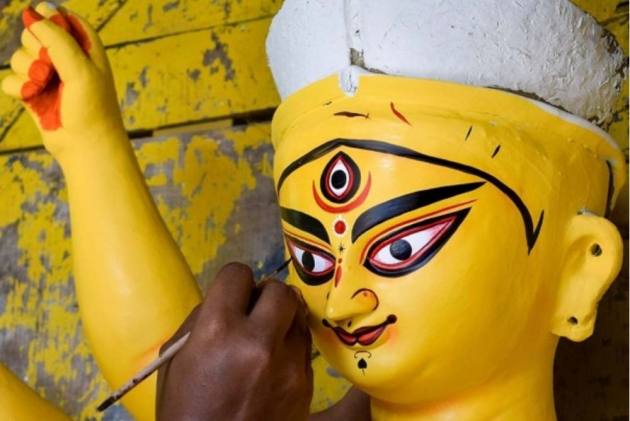 Ahead of the festival Durga Puja, an artist from Kumartuli in West Bengal has gone viral for carving out a 10-feet tall idol of Goddess Durga and shipping it to the United States. The idol, which artist and clay modeller Kaushik Basu created for the Indian diaspora in San Franciso, is purportedly the tallest Durga idol in the expatriate Indian community in the city.

Basu, who only makes Durga idols for pujas outside the country, said on Sunday that he made the fibreglass Durga idol a bit taller than the standard size as requested and one cannot make out the idol was not made from earth.

Basu who is making 15 idols ordered by diaspora Indians abroad, said due to the possibility of damage to a taller idol, both the artist and organiser are conscious and idols within 6 feet height are more popular for the same reason.

A Week-Long Celebration of India's Handicrafts

He said the 10 feet Durga idol has already left on the sea route.

A spokesman of Kumartuli Mritshilpi Samity said the height of idols being taken in ships or flights are normally not over and above 8 feet.

Very few pujas could take place due to last year's pandemic but this year the situation seems to have eased a bit in Europe and America, he said.

Claymodeller Mintu Pal of Kumartuli said he already got bookings of three pujas this year, unlike one last year.

He said 40-50 idols were made for overseas pujas in Kumartuli this year, unlike half of that figure last year, when pandemic struck large parts of the world.