The survey results of both the Republicans and the Democrats show that in case of a close race, the Indian Americans will play an important role. 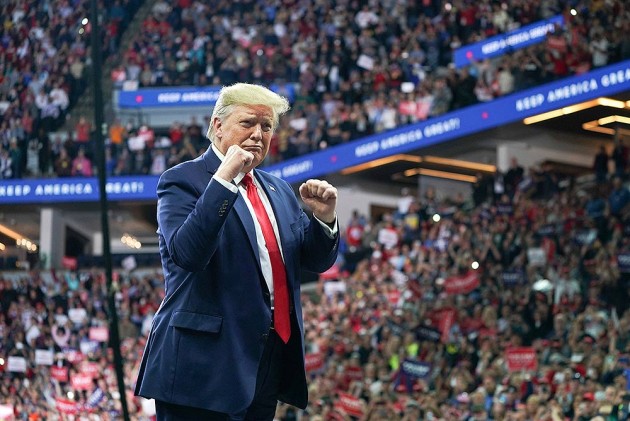 The Indian-American community could be "an absolute difference maker" in battleground states in the November 3 presidential elections, a top Democratic leader has said.

As a little over 100 days are left for the elections, both the Republican and the Democratic parties are making huge efforts to reach out to the small but influential Indian-American community in some of the key battleground states such as Michigan, Pennsylvania and Wisconsin.

Thomas Perez, chair of the Democratic National Committee, on Saturday said that Michigan has 125,000 Indian-American voters.

"We lost Michigan by 10,700 votes in 2016," he said, referring to the loss of Hillary Clinton, the then Democratic presidential nominee at the hands of President Donald Trump.

“The Indian-American vote, the AAPI (Asian-American and Pacific Islanders) vote more broadly, can be an absolute difference maker (in the 2020 presidential elections),” Perez said at a virtual event ‘An Electorate Coming of Age: Indian Americans for Biden’, jointly hosted by the South Asians for Biden along with AAPI Victory Fund and Indian-American Impact Fund.

“We are hustling to the finishing line… 108 days till the weekend. Think about those three states alone that I mentioned. The Indian-American votes alone can be the difference in moving forward,” Perez said.

Shekar Narasimhan, chairman of AAPI Victory Fund, said 77 per cent of the Indian-American voters polled in favour of Hillary in 2016.

“Today in all the polls and surveys, their favourability for Biden over Trump is 2.3 to one, (which) is very close to what it was then (in 2016: 2.4 to one),” he said, asserting that the party can aspire to get 75-80 per cent of the Indian-American votes.

“It is our goal to deliver 1 million to actually vote in by November 3, 2020 and vote for a Democrat candidate namely for Joe Biden,” Narasimhan said, referring to the 1.3 million Indian-American voters in the battleground states.

He said the information was based on data and latest research prepared by data guru Karthik Ramakrishnan.

“There are sectors of the Indian-American community throughout our country, throughout our battleground states. And we want to make sure we're engaging and connecting directly with you all,” senior advisor of ‘Biden for President’ campaign Julie Chavez Rodriguez said in her address to the event attended by over 800 Indian-Americans from across the country.

Amit Jani, the national AAPI director for the Biden campaign, said that the Indian-American community has grown in size, influence and in political and civic involvement. More Indian-Americans are joining politics and government.

“The election in November for the president is going to be historic, and we really need the help and support from the Indian-American community to really make a difference,” Jani added.

“For the first time they (Indian Americans) would make a big difference,” he told America’s Voice in an interview early this month.

Mason, who operates a team of 100 experts in the battleground states, said Karthik Ramakrishnan's finding that 77 per cent of Indian-Americans voted for Hillary in 2016 will not repeat in 2020.

He said 50 per cent of the Democrat voters are now going to choose Trump.

In the town hall with Thomas Perez, AAPI Victory Fund chairman Narasimhan said if the Democratic party works hard, they can aspire to get 75-80 percent of the Indian-American votes.

The survey results of both the Republicans and the Democrats show that in case of a close race, the Indian Americans will play an important role.

Mason, who has been holding a series of virtual meetings with Indian-Americans, said his survey results show that there is an unprecedented level of enthusiasm among Indian-Americans for the president.

“These 50 per cent of the Indian Americans (switching away from Democrats) which constitute 50,000 to 60,000 additional votes for President Trump in each of the battle ground states, will surprisingly make a big difference, in case of the race running close - though Trump will win those states with a wide margin,” Mason told PTI in a recent interview.

In Pennsylvania, 40,000 voters out of 110,000 Indian Americans voters who vote for Democrats, will switch to the Republican party.