Walter J Lindner, the German envoy, unveiled a symbolic painting on a large wall at the iconic Sheila Theatre in Paharganj in Delhi depicting the friendship between India and Germany. 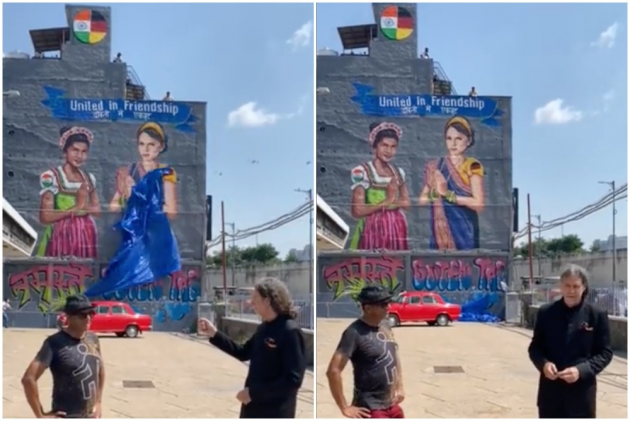 The German ambassador to India, Walter J Lindner, unveiled a life-size mural on a street wall in the capital city of Delhi on Sunday to mark the friendly relations between the two nations. He also said that the two countries need to cooperate further in order to counter the threat of the Afghan crisis.

India and Germany are very much on the same wavelength on issues concerning Afghanistan, Lindner said, and the two countries will see closer cooperation in this regard.

"India is a very big actor there (Afghanistan)... involved in a lot of developmental projects and Germany has been very active (there) for the last 20 years. So, we both share pretty much the same principles," Lindner said at an event held to mark the 31st anniversary of German reunification.

He unveiled a symbolic painting on a large wall at the iconic Sheila Theatre in Paharganj in Delhi depicting the friendship between India and Germany.  A video of the unveiling was shared on Twitter and has been going viral since.

Lindner said the two nations supported the previous government in Afghanistan and tried to help it make headway and improve the situation, especially for women, in the country.

"We have some conditions under which we talk to the Taliban -- an inclusive government which is not yet there. But we still have to have some kind of dialogue to make advancements on these points. India is very much on the same wavelength. So, we will see closer cooperation between us," he said.

The German envoy said the economy, environmental protection, green energy, student exchange, science and technology, and artificial intelligence will be the key areas of the India-Germany partnership ahead.

Replying to a question related to the India-UK row over COVID-19 vaccine certification, Lindner said, "I don't know exactly what the specifications are... why the UK is not recognising the app from India. Weeks ago, we recognised Covishield. I myself have been vaccinated with Covishield. So, those who have been administered Covishield do not need to undergo quarantine (in Germany) or face any other restrictions."

Since Covaxin has not yet been recognised by the World Health Organisation, those who have taken it have to undergo quarantine. Once the WHO approves the Bharat Biotech-manufactured vaccine, Germany will take the next step and see if it can recognise it, the ambassador said.