How The Taliban's Afghanistan Takeover Could Hurt US-Pakistan Ties

NATO has said Pakistan has a 'special responsibility' to make sure Afghanistan lives up to its international commitments. But some Pakistanis say they refuse to be the 'scapegoats' of the West's failure in Afghanistan. 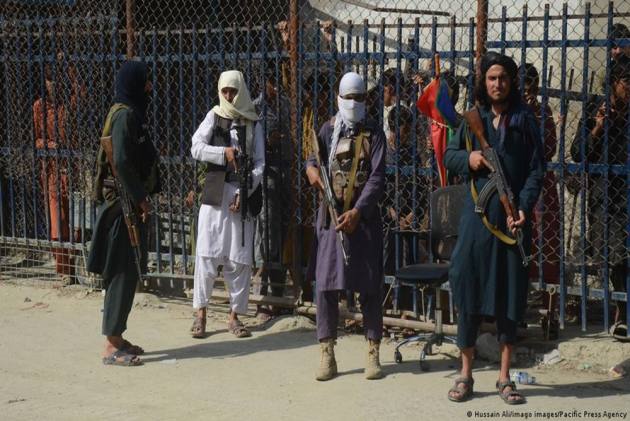 The fall of Kabul to the Taliban has left many people in Pakistan questioning their country's future relations with the US.

Some hard-liners in Pakistan say Washington will blame Islamabad for the Islamic fundamentalist group's takeover of Afghanistan.

Pakistan's Human Rights Minister Shireen Mazari wrote an article on Tuesday asserting that "her country would no longer accept being scapegoated for the failures of others."

'Will Get You Home': Biden Pledges To Americans In Kabul

British journalist Bill Emmott wrote last week that "the blame" for failure in Afghanistan and the return of the Taliban "lies largely with Pakistan and America's inability to bring the country onside."

Pakistan is said to be the largest backer of the cloistered group of the Taliban whose regime was recognized by Islamabad when they governed Afghanistan from 1996 to 2001.

Husain Haqqani, the South and Central Asia director at the Hudson Institute — a Washington-based think tank — says Pakistan's past role in Afghanistan has always created frictions between Washington and Islamabad.

"There is resentment against Pakistan's role in Afghanistan which may not help improve US-Pakistan ties in the near future," he added.

Pakistan in the past relied heavily on the US military and financial assistance, with some estimates suggesting that the country may have received over $30 billion (€25.5 billion) from Washington since 2001.

Islamabad also received generous aid packages and financial assistance during the Cold War when it was a close ally of the US.

But Haqqani says there is very little support in Washington "for resuming large-scale economic or military assistance for Pakistan right now."

Author Ayesha Siddiqa believes Washington has "lost interest" in Islamabad. Pakistan has always sought funds and military assistance from the US, but such support would no longer be on the cards, Siddiqa told DW.

"The ties are already strained and there is a sanction like situation with Pakistan being in the grey list of FATF (Financial Action Task Force)," she added.

Pakistan has sought a strategic partnership with China, throwing support behind the Belt and Road Initiative, Shoaib told DW, adding that the move particularly did not go down well with Washington.

The US still has many supporters in Afghanistan, he says, predicting that the war-torn country would be used against Pakistan by "pampering" Baloch insurgents who would target Chinese interests in Pakistan.

According to Haqqani, the US and Pakistan have very different foreign policy strategies, and so will have to find a new basis.

"Pakistan has made the strategic choice of aligning with China while the US seems to have chosen India as its strategic partner in the region. With tactical cooperation relating to Afghanistan diminishing, the relationship will have to find a new basis," he told DW.

NATO Secretary-General Jens Stoltenberg on Friday told reporters that Pakistan "has a special responsibility to make sure that Afghanistan lives up to its international commitments" and does "not once again become a safe haven for international terrorists."

"A stable Afghanistan is in the interest of all countries and not least the neighbors as Pakistan," he said at the press conference.

According to Haqqani, "Any evidence of international Jihadi groups becoming active again will also result in sanctions against Afghanistan which has implications for Islamabad as well."

But for Amjad Shoaib, the US could use the "pretext" of human rights and the presence of international terror groups to blackmail Pakistan. The defense analyst questioned why such groups were not eliminated during NATO's 20-year-long occupation.

Economist Azra Talat Saeed warns that deteriorating Washington-Islamabad relations would have a catastrophic impact for Pakistan. Saeed also believes the US will use its leverage against Pakistan.

"The US and its allies will make it more and more difficult for us (Pakistan) to access funds," she told DW, adding that the country is at risk of economic chaos like Iran and Venezuela.

Saeed believes that Washington will pressure Saudi Arabia and its Gulf allies to "create problems for Pakistani workers" and cause crucial remittances to plummet.

"This would be very devastating for our economy," she said.

The coronavirus pandemic has already dealt a severe blow to Pakistan's economy, prompting the closure of over 55,000 small businesses, rendering more than 20 million people jobless. The country already faces over $100 billion dollars in external debt.

Salman Shah, a former federal minister for finance, says that if Pakistan is "pushed to the corner," then Islamabad has Russia, China and other regional countries "to fall back upon."

"We wish to have good ties with the US and want it to be involved economically in the region," he told DW.