Eric Zemmour, a rabble-rousing television pundit and author with repeated convictions for hate speech who is finding fervent audiences for his anti-Islam, anti-immigration invective in the early stages of France's presidential race. 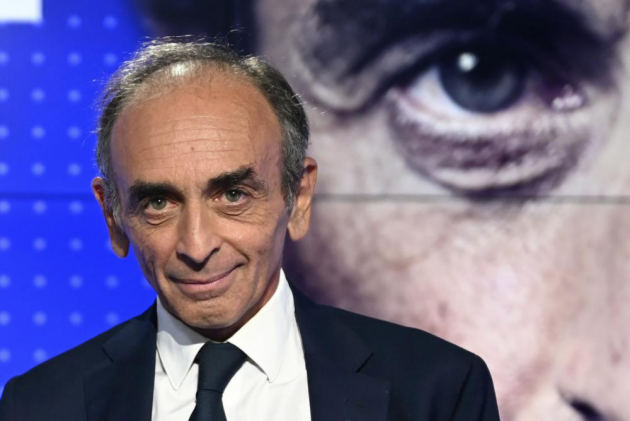 A survivor of the terrible journey to Auschwitz remembered how the youngest wailed. There were 99 children squeezed among 751 adults gasping for air, crazed by thirst and hunger, aboard convoy No. 63 that departed Paris at 10 minutes past midday on Dec. 17, 1943.

The 828 murdered at the death camp from that trainload alone included 3-year-old Francine Baur, her sister Myriam, 9, their brothers Antoine and Pierre, 6 and 10, and their parents Odette and André.

All born in France, their French citizenship proved worthless under France's wartime Vichy regime that teamed up with the country's Nazi occupiers and their extermination of Jews.

So when André Baur's great-nephew, a Paris mayor, was catching up on his Twitter feed recently and saw a claim reported in French media that Adolf Hitler's Vichy collaborators safeguarded France's Jews from the Holocaust, he was revolted. Worst still in the eyes of Ariel Weil, mayor of the French capital's city center, was that the debunked assertion came from a pretender for the French presidency who is himself Jewish.

That person is Eric Zemmour, a rabble-rousing television pundit and author with repeated convictions for hate speech who is finding fervent audiences for his anti-Islam, anti-immigration invective in the early stages of France's presidential race. He is packing auditoriums with paying crowds and filling supporters' heads with visions of a Trump-like leap from small screen to the presidential Elysee Palace when France votes in April.

Although not yet officially declared as a candidate, Zemmour has so far dictated the course and tenor of the campaign. With climbing poll numbers, now consistently in double digits, and a Trump-like knack for generating buzz — recent video of him pointing a sniper rifle at journalists is racking up millions of views — Zemmour is sucking airtime from declared contenders.

He has also destabilized them by hammering on about immigration and the mortal danger he says it poses to France, making it harder for mainstream rivals to steer campaign conversation back to themes — combating climate change, post-pandemic rebuilding and suchlike — they want to focus on.

Zemmour is acting as a presidential contender in all but name. Supporters are soliciting funds and the backing from elected officials that candidates need to run. Shown the rifle at a security show by an exhibitor who said, “When you are president, Mr. Zemmour,” he interjected, “Yes.”

That is a horrifying scenario for French Jews who are appalled by Zemmour's sugarcoating of the Vichy regime that was led by World War I hero Marshal Philippe Petain. He was tried and sentenced to death at World War II's end, subsequently commuted to life imprisonment.

That Zemmour is himself a descendant of Berber Jews from Algeria, a family history he talks about proudly, deepened the hurt for Jews who lost relatives to the Holocaust.

“Just because he is Jewish, he is doing something that nobody else can do, and that is just disgusting,” Weil told The Associated Press in an interview. “History is complicated but this is very simple: Petain did not protect the French Jews.”

The frightened men, women and children herded aboard convoy No. 63 swelled what, by World War II's end, became a shameful count of 74,182 Jews deported from France. Most were sent to their deaths in Auschwitz, in Nazi Germany-occupied Poland, where more than 1.1 million people perished.

A Paris court in February acquitted Zemmour on a charge of contesting crimes against humanity — illegal in France — for arguing in a 2019 television debate that Petain saved France's Jews from the Holocaust.

In its verdict, the court said the deportation of foreign and French Jews “was implemented with the active participation of the Vichy government, its officials, and its police.” Zemmour's comments negated Petain's role in the extermination, the court added.

Yet last month, Zemmour employed “les" when expounding again on Vichy in another broadcast interview, saying: "I say that Vichy protected the French Jews and that it handed over the foreign Jews.”

“It's abominable, because these poor people died," he added.

Lawyers who contest his court acquittal plan to cite that interview as evidence when their appeal is heard in January.

Politically, most threatened by Zemmour is French far-right leader Marine Le Pen. Since losing the 2017 presidential runoff to winner Emmanuel Macron, she has watered down some of her policy proposals in hopes of broadening her appeal. But Zemmour is chipping away at her base, seemingly poaching Le Pen voters who suspect she's gone soft. Some polls suggest they are neck and neck. But both consistently trail Macron, who is expected to stand again.

While both portray immigration as a threat to French identity, Zemmour uses language that Le Pen balks at and which his critics say positions him at the extremes of the far right. In a country that officially regards itself as colorblind and where public discussion of race is sometimes frowned upon, Zemmour is rare among political figures in openly distinguishing between skin colours.

At a recent rally in Versailles, he described woke culture as a plot to make “white, heterosexual, Catholic” men feel “so full of guilt” that they willingly abandon their "culture and civilization."

On Vichy, Zemmour has sought of late to draw a line under that topic. “I am no longer discussing historical points that are discussed by historians," he said in Versailles.

But for French Jews, the damage is already done. Some fear he has muddied decades of work by Holocaust researchers to indelibly document the horrors.

“He is denying something that was evident, that cannot be denied," said Eugenie Cayet, 84, whose father was deported from Paris to Auschwitz and killed.