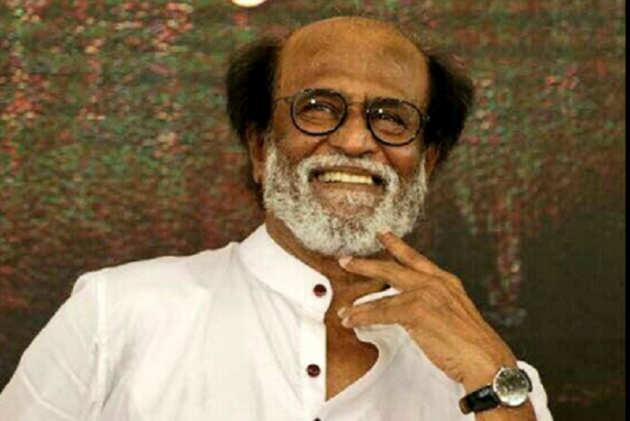 “Even if I come late, I will be the latest,” is a famous punch line of Rajinikanth in one of his films. True to his words he arrived late but even the late arrival could prove to be quite a disruptor in Tamil Nadu’s politics that other political players are trying to fathom.

Rajinkanth’s political entry on the last day of 2017 capped a year of churning and confusion post-Jayalalithaa as the state lurched from one spectacle to another. Having announced his intent to enter politics with his own political party targeting the state’s next assembly elections, Rajinikanth arrives with many advantages. He is not just a superstar in Tamil Nadu but even outside. His superstardom has also been spiced up with an anxious anticipation about his arrival in state politics.

No wonder his announcement was greeted with glee by his fans and supporters and even the general public. At the same time, entrenched political players tried their best to hide their nervousness behind platitudes like “anyone can enter politics in a democracy.” Their edginess is understandable given as Tamil Nadu is used to political leaders stepping off from the silver screen – MGR and Jayalalithaa are prime examples.

This filmi identity helps blur other disadvantages like being an outsider. MGR’s Malayali tag or Jayalalithaa’s misdirected Kannadiga label (she belongs to the Srirangam Iyengar lineage, which is every bit a Tamil caste) failed to cut ice as their celebrity persona was too overwhelming. Similarly, Rajinikanth’s non-Tamil roots (he is a Maharashtrian from Karnataka) have failed to ruffle his followers. “I came to Chennai when I was 24 and for the next 44 years, I’ve been only in Tamil Nadu. So which is my home?” he had asked in his first interaction with his fans.

“When film stars enter politics the voters become their fans. Their political judgment is clouded by their awe of the film-politician’s stardom. This can only hurt the quality of the state’s political discourse and lead to poor choices,” argued VCK general secretary D. Ravikumar. Ravikumar’s reservations are well grounded.

When actor Vijayakanth floated his DMDK in 2005 he walked away with the carefully nurtured caste votes of the VCK and its rival PMK in the Northern districts of Tamil Nadu. “Being a Vijayakanth fan mattered to our youth than being a supporter of the PMK or upholding Vanniyar identity and pride. This eroded our caste-based support, which had been built assiduously,” admitted PMK leader J. Guru. Rajinkanth’s arrival could prove to be a greater threat than Vijayakanth who has almost faded into the sunset.

The battle for R.K. Nagar threw up a surprise winner in TTV. Dhinakaran even though he was pitted against the ruling AIADMK and its well-known symbol of “Two Leaves.” Even as he was soaking up his win and hoping to reassert his family’s reign in the AIADMK, Dhinakaran has been shaken up by Rajinikanth’s arrival. The superstar’s description of the last one year of political happenings as one that shamed the state is as much an attack on TTV as on EPS and OPS. TTV’s supporters have already trained their guns on Rajinikanth labelling him as a proxy for the BJP.

The ruling AIADMK is not amused as well. Having been slaves of Jayalalithaa they know the effect a powerful personality can have on the Tamil psyche and more so AIADMK supporters who now feel the absence of a strong leader at the helm. “Other than our cadres, there is a huge bank of AIADMK supporters who will never vote for the DMK. A big chunk of these voters could see Rajinkanth as the substitute for Jayalalithaa when it comes to stopping the DMK. This will hurt the AIADMK and Dhinakaran equally,’ said a senior AIADMK Minister.

The real loser could be M.K. Stalin - Tamil Nadu’s longest prince in waiting.  Having waited this long for the Chief Minister’s chair, he has just taken control of the DMK after his father Karunanidhi retired from active politics. He had hoped that the split in the AIADMK would help the DMK to assert itself but R.K. Nagar proved him woefully wrong. Even as he was recovering the shock of the DMK losing its deposit in R.K. Nagar, the second shocker came in the form of Rajinikanth. In the battle of persona Rajinkanth, with his magnetic presence and direct talk, could easily grab more mind space than Stalin.

Also, Rajinikanth’s call for a politics based on spiritualism openly militates against the Dravidian politics of the DMK that has morphed from anti-Brahminism to anti-Hinduism over the years. MGR and Jayalalithaa, by being openly religious, had already diluted the Dravidian ethos of Tamil Nadu. And now comes Rajini with his brand of politics based on “dharma and ethics.” “After more than five decades of Dravidian rule there is a certain fatigue with this Dravidian brand of politics. Also, the number of temple goers have only multiplied in the state. Even Stalin recently acknowledged that majority of DMK members are Hindus who go to temples. So by preaching spiritualism in politics Rajinikanth is freeing himself from the dichotomy in which the DMK finds itself trapped in. His approach might actually sync with the current thinking of the Tamils,” observed writer Maalan.

Those predicting Rajinikanth might join hands with the BJP may also be in for a shock as it is an open secret the BJP in Tamil Nadu is dead wood. By polling fewer votes than NOTA in R.K. Nagar the party’s anemic presence stood exposed. There is no need for Rajinkanth to carry the BJP on his shoulder since Jayalalithaa had already proved that the BJP supporter will vote for the AIADMK as its chances of defeating the DMK and Congress were better than voting for the BJP. “Similarly BJP supporters and most of the middle class will see the winnability factor and transfer their votes to Rajinkanth instead of the BJP. So even without the BJP Rajinkanth can get the pro-BJP votes. Also by going with the BJP why would he risk losing the votes of Christians and Muslims. Any new leader would like to win acceptability across all communities. So being seen as pro-BJP will not help Rajinikanth in any way,” observed political commentator Ravindran Duraiswamy.

Even if the Assembly elections are held along with the Lok Sabha elections Rajinikanth will contest on his own just as Jayalalithaa did in 2014 to win 37 seats. If Rajinikanth can achieve something similar it is well and good for the BJP, since those many seats would have been denied to the DMK and Congress.