Why Left Unity’s Victory In JNU Is Special

It is particularly significant not only because JNU has been under siege since 2014, but also because it sends a profound signal to the entire nation. 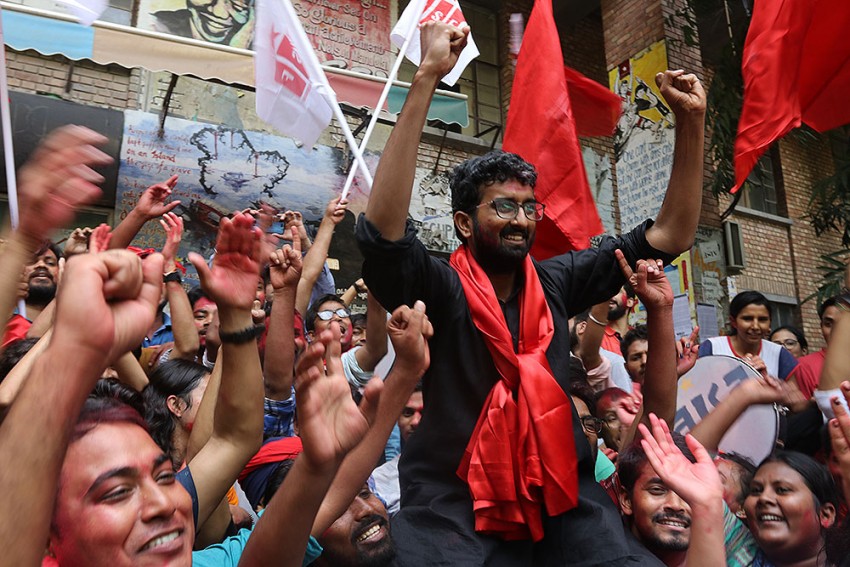 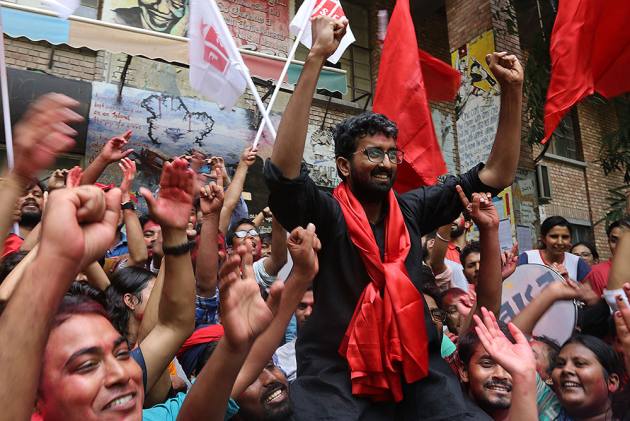 The winter nip in the air might still not be here, but spring has yet again arrived in the lush green campus of JNU, with its red brick walls and its ‘Paris Commune’ of hundreds of peacocks across the forests and near the library. Indeed, this might be still the month of September, but the students’ union elections are always its biggest festival, often called the ‘Great October Revolution’ of JNU. Soon after the victory of the Left in Panjab University, Chandigarh, especially the great victory of the first woman president of the students’ union, and AISA’s vice presidential candidate in Garhwal University in Uttarakhand, the red flags yet again fluttering in JNU amidst resounding revolutionary slogans and drum beats will surely charge up student politics across the country.

The clean sweep of the ‘Left Unity’ in the central panel and across the various schools, including in the science schools, is particularly significant not only because JNU has been under siege since 2014, but also because it sends  a profound signal to the entire nation, and especially to the ruling regime and its muscle-flexing ABVP storm-troopers, who have been out to ravage, brutalise and destroy the great progressive, intellectual, political and academic inheritance of this prestigious university.

Indeed, even while allegations of fudging the EVMs in the Delhi University students’ union elections made the rounds, the ballot paper in JNU unilaterally endorsed the victory of the ‘comrades’. EVM nahi, yeh ballot hai… Modi ji pe mandate hain…” was a popular slogan in the early hours in JNU on Sunday. So much so, the ABVP has faced a crushing defeat across the board, lagging far behind. Its attempt to capture the Election Commission office, after a spurt of violence and lumpenism, was yet again resisted by the entire campus of collective student power with non-violence and resilience. Yet again, rationality and courage scored a victory over money and muscle.

The Election Commission (EC) too stood its ground despite the prolonged disruption and the violence, which stopped the counting process. All students’ organizations, barring the ABVP, came out with a united statement condemning this violence and the degradation of a historical and democratic process, of which JNU is a proud role model.

JNU elections are perhaps the only elections of a students’ body in the entire world which is fully conducted by an EC comprised of neutral students. The elections are celebrated for debate and discussions, with spaces allocated for hand-written posters for various parties and contestants, absolutely no use of money or muscle power, and the candidates reaching out to the students’ community with the sheer power of ideas and arguments, and the narratives of struggle. National and international issues are debated openly and with no disruption whatsoever. Questions are asked and dissent is welcomed. Often, the debates would go on all night till the early hours of the morning.

Violence or garish display of wealth is abhorred in JNU, unlike its open display in Delhi University. In that sense, the JNU elections are unique.

This resounding victory of the Left Unity in JNU is special because it comes before the 2019 Lok Sabha elections, especially in a political atmosphere where hate politics, mob-lynching, communal polarization, attacks on dissenters and human rights defenders, and a general atmosphere of fear and censorship dominates the atmosphere. Certainly, Indian democracy and its constitutional ethos is under threat in the contemporary scenario.

JNU is currently presided over by a dispensation led by a vice-chancellor who has no clue of its entrenched democratic traditions and its deep and celebrated intellectual and academic inheritance. Indeed, the entire faculty and student community has stoically and resolutely resisted the all-out effort by the current VC to destroy JNU’s inherited essence.

From blocking poor students, especially from the SC/ST and OBC communities, to curtailing admissions for higher research, to obscene levels of fines running into thousands and arbitrary and revengeful punishments imposed on students, including show cause notices to teachers who refused to toe the line, the administration has been relentless in its methodical trajectory to ravage JNU’s original mandate as stated by Jawaharlal Nehru, and printed in its first prospectus, with Nehru’s ‘red rose’ as its emblem.

“A university stands for humanism. For tolerance, for reason, for the adventure of ideas and for the search of truth. It stands for the onward march of the human race towards ever-higher objectives. If the universities discharge their duties adequately, then it is well with the nation and the people,” said Nehru.

Clearly, the current regime has little respect for Nehru’s vision of a university. It presumed that once it is able to crush and tame JNU, all other campuses will fall in line. That is why it targeted JNU, branding it “anti-national”, among other negative imagery, with ample use of a section of media which not only chose to ‘bend and crawl’, but became an active propaganda machine of fake news and organized lies, pumped during prime time day after day, including using doctored videos and allegations, without an iota of evidence.

Witness the fact that the police entered the campus for the first time after 1983 in 2016, and arrested the then JNUSU president and two other students, on charges which have not been proved till this date. So much so, not even a chargesheet has been filed till date. JNU’s image has been tarnished and scandalized. Surely, after there was an attempt to murder him, Umar Khalid is right when he says that the original lynching machine were the TV anchors and spokespersons, who destroyed his reputation day after day, with not one evidence to prove their daily abuses.

Despite this, the university has stood out for its academic excellence and brilliance, and its all round contribution across many fields in India and abroad. It has not succumbed to either fake news or the ‘manufactured  consent’ of the ruling regime’s propaganda machine.  It has neither been crushed nor has it been tamed. Instead, it has become a symbol of peaceful resistance and inspiration for campuses across India and the rest of the world. Certainly, the flags might be red in JNU amidst the incredible melody of rhythmic slogans,  but a hundred flowers, and  a hundred schools of thought will continue to flourish in this beautiful campus. As one former vice-chancellor said, “JNU students are not violent. They are argumentative.”

Truly, finally, ideas have won against muscle and money, and the arrogance and dictatorship of power. And what a victory!

(The writer is a senior journalist and former President, JNU Students’ Union. Views are personal)