Why Clinton Stole The First Debate

She managed to capitalise on her dominant position in a very polished and elegant way, demonstrating great political skills. 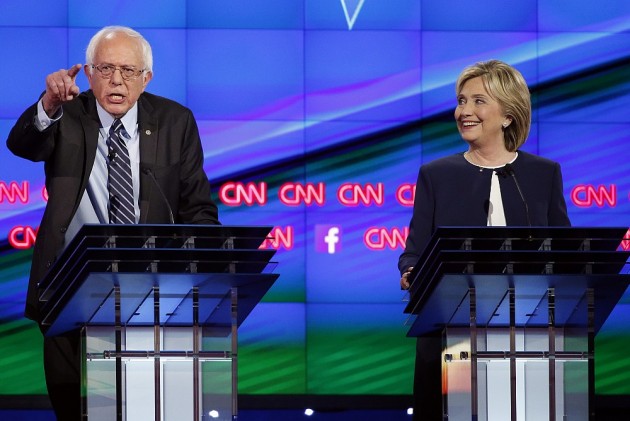 The stage of CNN first debate for the election of the next democratic presidential candidate went on fire last night with millions of people glued to the screen to watch the show. Much has been said and many issues had been raised, but who is the real winner? Five candidates participated in the debate but the spotlights were all on front-runner Senator Hillary Clinton and for Independent Senator Bernie Sanders, the "outsider" self-declared democratic socialist who is threatening her leadership.

Most of the media commentators argue that Clinton's performance was superior and that she managed to capitalise on her dominant position in a very polished and elegant way, demonstrating great political skills. Yet, surveys on social media and trends from the eeb show that Sanders performance was appreciated for its simplicity, integrity of values and novelty of arguments.

What can be said with confidence is that the debate confirmed the enormous gap among the five contenders: Senator O'Malley was the only one who tried to participate in the show but he is definitely going to have a hard time keeping up with the others.

Unlike the Republican debates which took place over the past months and saw candidates fighting and attacking each other, the Democratic one appeared much more civilized. There was no twist and the personal attacks (if ever there) were carried in a very subtle way. This was a debate that focused on the real issues, informing the electorate on the positions of the candidates on things like economic inequalities, immigration, foreign policy and climate change.

We must remind ourselves that the US is a country in which candidates are often chosen on the basis of the behavior and the values they carry in their private lives. Seeing candidates debating on the basis of their political ideas on particular issue rather than their personal affairs is something already remarkable.

One of the highlights of the night was when Sanders deliberately decided to avoid taking advantage of a controversy which involved Clinton's e-mail (While Secretary of State instead of using the government email server as the protocol would suggest she used a private server) arguing that the Americans do not care about Clinton's personal issues but they want to be informed on the "real" issues. This gesture of fair-play came after an accusation received by Clinton on his views and past votes on gun control.

The CNN moderators of the debate tried to highlight and put on the table the differences among the candidates, sometimes asking tricky questions to the candidates on some of their controversial positions. By asking Sanders what he means by democratic socialists and if he believes this label is going to undermine his presidential campaign or by asking Clinton if she believes her presumed inconsistency and her being an "insider" within Wall Street will threaten her credibility as a progressive candidate, the moderators unveiled the core of their campaigns.

Sanders is playing the wildcard of the "outsider", Independent and "anti-establishment" populist leader who wants to bring a grass-rooted political revolution to Washington running as a Democrat. During his long career in the Senate he has become a prominent figure fighting for civil rights and workers' conditions. He has founded his campaign on the rise of income inequalities, the decay of the once strong American middle-class and the influence of the billionaires in political decisions.

He distanced himself from the other candidates for his refusal of Super PACs, independent political committees that support candidates with enormous and often anonymous donations often traceable to corporations and billionaires. Instead, he funded his campaign through thousands of individual donations (with an average of USD 30 per donation) reaching over USD 25 millions in the last fundraising quarter, compared to 28 raised by rival Clinton mainly through big donors.

When questioned about his label he simply replied that being a democratic socialist means understanding that inequalities are a moral issue and that something must be done, especially when one tenth of the 1% owns almost the same wealth as the remaining 90% and 57% of the income goes to the 1%.

In a country which is considered the homeland of Capitalism being a socialist and holding this position has been generally seen as outrageous and inherently anti-American. For this reason many believe that Americans won't trust him. Yet, during the debate he pointed out that he is not against Capitalism, but he is certainly against "Casino Capitalism", a distort version of Capitalism in which most of the benefits are reaped by a small minority (the 1%), at the expenses of the community (the majority of the people and Mother Nature). He argues that the backbone of American economy, the small and medium enterprise, has not benefit from the economic growth of the past three decades and this has to do with the rise of an oligarchy.

During the debate he clearly explained that his socialist ideology consists of a commitment to empower the People by redistributing economic, socialist and political power in a just, meaning fair way. In practical terms he proposed a higher minimum wage, universal health care, free higher education, as well as a programme of public investments of 3 trillion USD financed through higher taxes on Wall Street. He concluded his sermon arguing that he is convinced that most of the average Americans share his vision but they haven't realized it yet.

Coming back to the Clinton, she is quite the opposite of an "outsider". Supported by the majority of the party, she has been the front-runner from the beginning. She became the First Lady in 1993 under Bill Clinton's administration and she ran for office in 2008, ending her campaign and endorsing Obama at a late stage of the primary elections. She eventually became Secretary of State under the Obama's administration. She founded her political campaign for this primary contest on her credibility as an experienced politician who has always worked to make America a more progressive country.

She is a very charismatic figure and she instigates security to the democratic electorate. Plus she would be the first woman to become president of one of the most powerful countries of the world. Like Sanders, she has focused her campaign on the fight against income inequality, calling among other things for an increase of the minimum wage and debt-free college education for students who work. Yet, she has also promised a stronger control and taxation over Wall Street activities.

Many of her positions resemble Sanders's ideas, even though she appears more moderate. For this reason she is more appealing to the centre of the political spectrum and therefore she is considered a stronger candidate for the presidential election, someone who is able to catch the important votes of the moderate Americans.

During the debate she was able to point out her proximity to the "traditional" American values such as the American dream and strong family values. When asked about the risks of losing credibility due to inconsistency in foreign policy and economic regulations as well as due to her strong ties to the powerful, she responded that unlike other politicians who remain attached to their ideologies, she has changed her ideas whenever she realised her positions were proven wrong by relevant facts. Yet, she argued that she is not closer to the powerful than the other candidates, and if elected as president she will represent the interests of the middle-class.

With great oratory skills she reminded the public that she comes from a middle-class family and she managed to reach her position exactly because she was able to follow her American dream, capitalising on the opportunities given by her country: as a president she will fight hard to make sure other Americans have such opportunities.

Only time can tell us if the electorate trusts her, despite the enormous funding received by the 1% for her campaign.

So far, most of the polls show her at a greater advantage. A recent poll by NBC/Wall Street Journal shows that she can count on 53% of the votes, while Sanders can count "only" on 38% of the support. Yet, the same poll show that her support has declined from 59% in mid-July and Sanders increased from a 15% in the same poll.

The race has just started and this was the first of a long series of debates. This first round showed for the very first time who the candidates are and where they stand on topical issues. It also showed that Clinton knows how to do her job with an impeccable smile, plus she can count on the support of the party and on a lot more money than Sanders.

No doubt, Clinton will try to consolidate her position and for Sanders the run is all uphill. But we can be sure that these two candidates will make a great show to follow. Plus, the consequences of this race will affect our lives more than we can expect.