India has faced and bettered many challenges. The immediate challenge to restore a beleaguered rule of law—gasping to survive in the dust and din of Indian 'populocracy'— to its rightful place is much simpler. 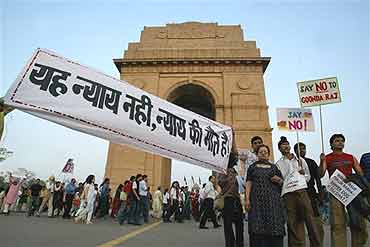 As the sun burns through the fog of 2007, some fading images daunt the mind. Images of candles lit by those seeking justice for Jessica Lall, an angry Ram Jethmalani chastising the media, a "starving" Mamata Banerjee being wooed by politicians of all hues, a citizenry wondering who runs this country as parliamentarians feign alarm at excessive judicial activism.

These images— apparently disparate, have a common black thread—that of a beleaguered rule of law gasping to survive in the dust and din of Indian ‘populocracy’.

The rule of law is the bedrock of all liberties—an unamendable basic feature of our constitution. John Finnis (Professor of law and legal philosophy at the Oxford University) describes the rule of law as "…the name commonly given to the state of affairs in which a legal system is legally in good shape". Our legal system is, plainly speaking, in appalling shape. The Jessica Lall verdict was, for us lawyers, therefore an unsurprising product of a dysfunctional criminal justice system.

The constitutional guarantees of life and liberties include the right to a "fair trial". A delayed trial is not a fair trial—neither to the victims and their relatives waiting endlessly for justice, nor to the accused who languish in overcrowded jails.

The Jessica Lall verdict caused visible outrage when the articulate section of society felt that the rot in the system had touched their life. Their anger was reflected in the media interest, and media coverage fed their anger. The result was a build up of pressure that led the court to hear the case on a day to day basis— its "side effect" was a fuming Ram Jethmalani. His angst too was more than justified—this dysfunctional system may just lead us to the emulate the French Revolution where "public opinion" was sufficient to send someone to the guillotine. And this is not being alarmist—remember the women in Nagpur who clobbered an accused rapist to death because they were sure that the courts would let him off?

A system in which there are over 3 million plus cases pending in the High Courts and around 20 million plus in the trial courts can be fairly described as having collapsed. Successive governments have done virtually nothing to address the causes—lack of judge strength and lack of infrastructure. The political system no longer appears to be on the same side—of late there is visible antipathy towards the rule of law and courts—except where it can be used to embarrass political rivals. This attitude is prompted, at least in some measure, by increasing criminalization of politics, and by the perception that the courts are a let and a hindrance in achieving populist measures (e.g . reservations) or using populist tactics (e.g. strikes, bandhs et.al). 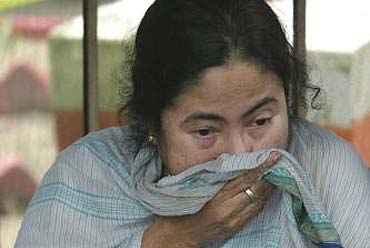 Populist causes, in a fractured polity, tend to have a face off with the law. Populist methods seriously threaten the foundations of the rule law. Mamata Banerjee’s cause is a case in point. Didi did not assist the aggrieved farmers (if they are truly aggrieved) to resort to legal remedies to vindicate their grievances. The Courts have not only the power but the duty to deal with violation of the rights of the downtrodden—but they are not a vehicle to achieve a political agenda.

A hunger strike until death is demanding a result at the threat of a criminal act (i.e. suicide)—which is blackmail. If political blackmail gains legitimacy, it will be a sure step towards anarchy. It is blasphemous to compare these to Gandhiji’s satyagraha which was directed against a foreign monarch who ruled India. Besides, nobody could question the "satya" of the "satyagraha"!

The courts are duty bound to enforce the law even if it has unpopular consequences. If the Supreme Court has to enforce the town planning law on a street by street basis, it is not excessive activism but a testimony to an abysmal failure of those whose primary duty it is to enforce the law. The argument that the courts are neither meant nor equipped to run the country, though true, is a mere attempt to obfuscate the real issues.

The real issue is the gradual decline in the credibility of the other institutions of governance. Egregious corruption has eroded public confidence in the other institutions— the elected representatives, the civil service and the police. The judiciary— and in particular the Supreme Court—is seen as the only surviving hope.

The recent criticism of the Supreme Court, though, is not so much out of concern for institutional comity and separation of powers, but out of concern over judicial review of "sensitive" matters.

The Congress government of Late Narsimha Rao found no "activism" in the Supreme Court overseeing the shilanayas in December 1991— a little known fact is that the then Attorney General told the court that the Armed forces were ready— awaiting the court's directions. If the army was to fire upon the Kar Sevaks, it would be expedient if their deployment was ordered by the Supreme Court.

The list of judgments that have caused alarm speak their own story—two of the most criticised sum it up. These are the "sealing case"—a direction to adhere to the town planning laws in Delhi (notwithstanding its unpopular consequences—not to mention its consequences on properties of those in office, as exposed in various newspapers, particularly the Indian Express), and the latest judgment holding that no sanction from the government is required to prosecute a minister on the grounds that he has received a bribe—since receiving bribes are no part of their official duties .

No critic has been able to point out as to how the Court went beyond the established parameters of judicial review—the objection clearly is to the court directing the government. to place the law above populism or political interest. The attempts of the Supreme Court to ensure that the Forest Advisory Committee includes established environmentalists prompted an Additional Solicitor General to suggest that the Court does not respect other institutions. He is partly right— corruption and abuse of power have become institutional—that one institution, the court, mercifully, does not respect.

India’s survival as a democracy has been in itself a great achievement—unfortunately, somewhere along the way, the institutions have "lost their savor". We have faced and bettered many challenges. The challenge to restore rule of law to its rightful place is much simpler. The remedy is threefold.

The media did yeomen service in the Jessica Lall case—this momentum must not be lost. The media can create sufficient public awareness that would ultimately force the pace of these reforms.

All this sounds unreal in the day light— but dreams at dawn are what the new year is all about. Besides, some day we must wake up and ask as to what would we have gained if we can rival the U.S. or the Chinese economy but lose democracy itself?

We can only forget at our peril the warning by the great jurist John Locke who said, "Wherever law ends, tyranny begins"

Senior lawyer Harish Salve is a former solicitor-general of India. A shorter version of this article first appeared in the Indian Express