'We Were Shown .. Atrocities On Muslims In India' 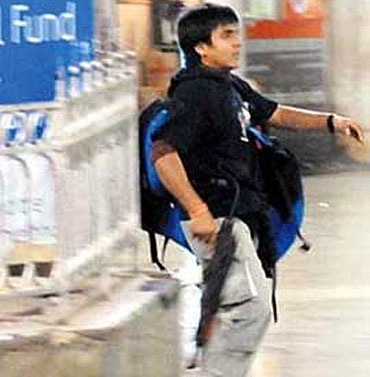 I am as above and reside at the above given address since my birth. I have studied up to 4th standard from Government Primary School.

After leaving school in 2000, I went to Lahore. My brother Afzal stays at Galli No. 54, R.No. 12, Mohalla Tohit Abad, near Yadgar Minar, Lahore. I did labour jobs at different places till 2005. During that period I used to visit my native place. In the year 2005, I had a quarrel with my father. Therefore, I left my house and went to Ali Hajveri Darbar at Lahore.

At the said place, the boys who had run away from their houses are kept. From there, the boys are sent to different places for employment. One day when I was there, a person by name Shafiq came there and took me with him. He was in the catering business. He was from Zhelam [Jhelam]. I started working with him on daily wages. I was given Rs 120 per day. After some days my salary was increased up to Rs 200 per day. I worked with him till 2007.

While I was working with Shafiq, I came in contact with one Muzaffar Lal Khan, aged 22 years, r/o Village -Romiya, Tehsil & Dist -Atak, State -Sarhad, Pakistan. As we were not getting enough money, we decided to carry out robbery / dacoity at some place so that we will get a large amount. As such we left the job.

Thereafter we went to Rawalpindi. We hired a flat at Bangash Colony, Rawalpindi, and started residing in it. Afzal had located a house where he thought we would get a large amount.

While we were in search of fire-arms we saw some LeT stalls at Raja bazaar, Rawalpindi, on the day of Bakri-id. We thought that, even if we procured fire-arms, we could not operate them. Therefore, we decided to join LeT for weapon training.

After making enquiries we reached LeT office. In the LeT office we met a person. We told him that we wanted to join LeT. He made some enquiry with us, noted our names and address and told us to come on next day.

On the next day, we went to LeT office and met the same man. One more person was present with him.

He gave us Rs 200 and some receipt. Then he gave us the address of a place called Marqas Taiyyaaba, Muridke, and told us to go to the said place where LeT is having their training camp. As directed, we went to the said place by bus. We showed the receipt given to us at the gate of the camp. We were allowed inside. At the entry gate, our details were filled up on two forms. Then we were taken to the actual camp area. At the said place, initially we were selected for 21 days training called Daura-Sufa. From the next day, we started attending training. The daily programme was as mentioned below.

After completion of the above said training, we were selected for another training called Daura-Ama. The said training was also for 21 days. We were then taken in a vehicle to a place called Mansera, Buttal Village. At the said place, we were given training of all weapons for 21 days. The daily programme was as mentioned below.

After two months, I was allowed to go to meet my parents. I stayed with my parents for one month. Thereafter, I went to LeT camp situated at Shaiwainala, Muzzafarabad, for further advanced training. At that place, they took my photographs and filled up some forms. Then we were taken to Chelabandi pahadi area for training called Duara-khas. The said training was for 3 months. The training included PT, handling of all weapons and firing practice of the said weapons, training of handling of hand grenade, rocket launchers and mortars. The daily programme was as mentioned below.

At the said place 32 persons were present for training.

Out of these 32 trainees, 16 were selected for some confidential operation by one Zaqi-ur-Rehman Chacha. Out of these 16 trainees 3 trainees ran away from the camp. The above said chacha then sent the remaining 13 of us along with a person called Kafa to the above said earlier camp at Muridke. At Muridke, we were taught swimming and getting acquainted with the environment experienced by a fisherman on a sea.

We did some experimental tours by launches on the sea. During the said training, we were given lectures on working of Indian security agencies. We were shown the clippings highlighting the atrocities on Muslims in India.

After completing the said training, we were allowed to go to our native places. For seven days, I stayed with my family members. After seven days I went to the LeT camp at Muzzafarabad.

The above said 13 of us were present for training. Thereafter, as per the instructions of Zaki-ur-Rehman, the above said Kafa took us to camp at Muridke. At the said camp again we underwent the training of swimming and getting acquainted with the environment and experience on sea. The training continued for one month.

During the said training, we were given the lectures on India and its security agencies, including RAW. We were also given the training on how to evade the chase by security personnel. We were strictly instructed not to make phone calls to Pakistan after reaching India.

The names of the persons present for the said training are as mentioned below.

After completion of training, Zaki-ur-Rehman aka Chacha selected 10 of us and formed 5 teams each having two persons on 15 Sept 2008. My team included myself and Ismail. Our code name was VTS team. We were then shown the site 'Google Earth' on Internet. On the same site, we were shown the information about Azad Maidan, Mumbai, how and where to get down at Mumbai. We were shown the film on VT railway station and the film showing the commuters moving around at rush hours at VT railway station.

We were instructed to carry out the firing at rush hours in the morning between 7 to 11 hours and between 7 to 11 hours in the evening. Then kidnap some persons, take them to the roof of some nearby building. After reaching at the roof top, we were to contact chacha. After that, chacha would give the telephone or mobile no of electronic media. We were then to contact the media persons on the same phone. And as per the instructions received from chacha, we would make demands for releasing the hostages. This was the general strategy decided by our trainers.

The date fixed for the said operation was 27th Sept 2008. However, the operation was cancelled for some reason. We stayed at Karachi. Again we made practice of travelling by speed boats on the sea. We stayed there upto 23rd Nov 2008. The other teams were as mentioned below.

On 23rd Nov 2008, the above said teams including our team left from Azizabad, Karachi along with Zaki-ur-Rehman aka Chacha and Kafa. We were taken to the nearby sea shore. At 04.15 hours we reached the sea shore. At the sea shore we boarded a launch. After traveling for 22 to 25 nautical miles we met a bigger launch in the sea. We boarded the said launch and after journey of 1 hour we boarded a bigger ship by name Al-Huseini in the deep sea. While boarding the said ship, each of us was given a sack containing 8 grenades, one AK-47 rifle, 200 cartridges, 2 magazines and one cell phone for communication.

Then we started towards Indian coast. When we reached Indian waters, the crew members of Al-Huseini ship hijacked one Indian launch. The seamen from the said launch were shifted to Al-Huseini ship. We were then boarded the hijacked Indian ship. One Indian seaman was kept along with us.

At the gun point, he took us towards the Indian coast. After journey of about 3 days, we reached near sea shore of Mumbai. While we were at some distance from the shore, Ismail and Afadulla killed the Indian seaman, (Tandel) at the basement of the said Indian launch. Then we boarded floatable dinghi and reached Budwar Park Jetty as per the instructions received earlier.

After getting down at Budwar Park, I went along with Ismail to VT railway stn by taxi.

After reaching the hall of VT railway stn. We, i.e. Ismail and myself, went to the common toilet, took out the weapons from our sacks, loaded them, came out of toilet and started firing indiscriminately towards the passengers.

Suddenly one police officer in uniform came towards us and opened fire. In retaliation, we threw hand grenades towards him and also opened fire towards him. Then we went inside the railway stn threatening the commuters and randomly firing at them.

At that time policemen started firing at us. As such we threw some grenades towards them. When we were coming out of the hospital premises, we suddenly saw one police vehicle passing in front of us. Therefore, we took shelter behind a bush.

Another vehicle passed in front of us and stopped at some distance. One police officer got down from the said vehicle and started firing at us. One bullet hit my hand and my AK-47 dropped down. I bent to pick it up when second bullet hit me on the same hand. I got injured. Ismail opened fire at the officers who were in said vehicle. They got injured and firing from their side stopped.

We waited for some time and then went towards the said vehicle. Three bodies lying there. Ismail removed the three bodies and drove the said vehicle. I sat next to him. While we were moving in the said vehicle, some police men tried to stop us. Ismail opened fire towards them while we were on the move; our vehicle got punctured near a big ground by the side of road. Ismail got down from the driver seat, stopped a car at the gun point and removed the three lady occupants from the said car. Then Ismail carried me to the car and sat me inside as I was injured. Then he drove the said car.

While we were moving in the said car, we were stopped on the road near sea shore. Ismail fired towards them. Some policemen got injured. Police also opened fire towards us. Due to the police firing Ismail got injured. Then police removed us to some hospital. In the hospital I came to know that Ismail succumbed to the injuries he has sustained.

My statement is read over to me, explained in Hindi and it is correctly recorded.

*The surviving terrorist's name has been variously used as Azam Amir Kasab, Muhammad Amin Kasab, Azam Amir Kasav, Iman Qasab etc. His correct name is as above. Apparently, when asked about his caste, he had mumbled in pain that he hailed from the Kasai (butcher) community. This is what was misheard and mistranscribed as Kasab/Qasab/Kasav or even Kamaal in some of the accounts.