Washed Out Of Sight

The 'breaking news' on 24-hour news channels range from a model getting killed in a freak accident when she is hit by a glass pane falling from the 24th (or is it 48th?) floor of a luxury hotel to the first monsoon showers and the water-logging in th 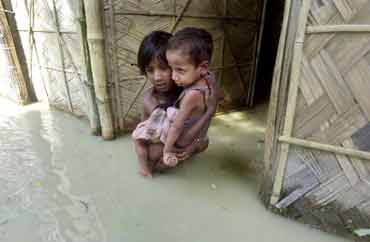 Sitting in Guwahati, tucked away in the remote Northeastern part of India, I "enjoy" watching 24-hour television news channels for the sheer trivialization of news and what they have managed to bring about. The "breaking news" range from a model getting killed in a freak accident when she is hit by a glass pane falling from the 24th (or is it 48th?) floor of a luxury hotel to the first monsoon showers and the water-logging in the streets in Delhi and Mumbai.

Indeed, models and page three types are a staple diet on the channels and I have no bones to pick on that since the news channels also need to survive commercially. What I am amazed at is the sheer ignorance and "neglect" that these channels and, indeed, even the "national" print media display about events and happenings in distant regions like the Northeast.

Take the game of "Waiting for and tracking the Monsoon."

While everyone rightly concentrates on the Monsoon's arrival in Kerala, no one has really bothered to find out or report in detail the havoc that rains create in the seven states of the region every year, starting end-April

But mere figures do not convey the extent of misery that the people undergo every year between June and September.

Take the case of north Assam's Darrang district, which is normally less flood-prone than several other districts in the state. This year several areas have come under flood waters. When the water comes rushing in at dead of night, people like Hari Nath, a lower division clerk in the state PWD, do not know how to cope with the adversity. "Waters rose chest high and submerged everything that we had," he rues, sitting at a relief camp along with seven of his family members. For three weeks, Nath and family stayed in a makeshift relief camp. Now, he is trying to rebuild his life. He laments absence of an early warning system in the state that boasts of a full-fledged flood control department and a cabinet minister to head it.

Post-floods, too, there is no respite.

Look at what happened to a farmer Balen Pegu in Assam's most flood-prone district, Dhemaji. As I went visiting, Pegu was sitting disconsolately in front of what was once his house. As he cast his eye around him, he could see the paddy field that belongs to his family under knee deep slush and sand. The sun was beating down relentlessly. Pegu and his family of six had barely survived the unprecedented floods in the Brahmaputra but the future looked bleak and the struggle for survival, uphill. Pegu, a small-time farmer who eked out his living by cultivating a small patch of land did not have a clue as to what he would do for a living in aftermath of the floods.

The waters of the rampaging Brahmaputra had receded, but that had only brought about a flood of problems. Since miles and miles of roads had disappeared and several bridges washed away, no vehicles could reach Pegu's village. When the area was flooded, the boats at least could bring in the essentials. In the dry season even that does not happen. "I do not know where my next meal is going to come from," Pegu had said. And he is not alone. Several thousand families in Dhemaji and the adjoining Lakhimpur district are routinely on the verge of starvation. As the local MLA Dilip Saikia observes: "Every year floods ruin the people in more ways than one. While the immediate danger is of water-borne diseases spreading to a vast section of the population in absence of safe drinking water, the long-term problem is starvation deaths since no land in the area remains suitable for cultivation."

This year the situation is no different. Already vast stretches of land in Dhemaji district are under water. Other four districts, Hailakandi, Karimganj, Kamrup and Nalbari are also flood-hit. Over three lakh people are either homeless or are living in knee deep water. And we are still in the middle of June!

How many of our 24-hour news channels talked about these facts except putting them on the running scroll at the bottom of the screen?

What then is the solution to the state's annual nightmare?  Several schemes have been tried over the years but most of them have been ad hoc at best, despite the fact that Assam is perhaps the only state in the country which has a separate Flood Control Department and even a Cabinet minister to look after it.

The Centre, worried over the annual devastation, had set up the Brahmaputra Board, a statutory panel in 1981. After years of deliberation, it prepared a master plan which suggested building two massive multi-purpose dams on the Dehang and Subansiri rivers in Arunachal Pradesh, which constitute the Brahmaputra and smaller dams for other tributaries. At current estimates, it will need at Rs 25,000 crore to build the two mega dams.

Inevitably, politics and sheer apathy has ensured that the master plan is gathering dust. For 11 years, the Board was without a chairman until it was revived in 1995 with appointments to some key posts. One of the first tasks that the rivitalised Board has taken up is the implementation of  Pagladia multi-purpose project in lower Assam. The Rs 479 crore project is expected to save at least Rs 15 crore annually in flood devastation.

Another set of figures: Nearly 70 per cent of the state's embankments running into a length of some 4,448 km have lost their capacity to prevent floods. Just strengthening these embankments would now require a massive inflow of funds. Although floods have been an annual feature, there is very little planning done in initiating preventive measures. Even elementary steps like stocking up food grains for the monsoon season, is marked with indifference.

The biggest casualty of  recurring floods are the vital roads running all across north-east. Even here, the government, which receives large amounts of funds to repair the national highways, often diverts the money to other heads. This has left important national highways in a state of constant disrepair, hampering smooth communication. The northeast, which imports essential commodities worth almost Rs 1,500 crore per annum from other parts of the country, is thus perpetually running short of supplies.  Prices in the region are perhaps the highest in the country which, in parts, is understandable for several companies like consumer giants HLL, Nestle and ITC, to name a few,  are some times forced to airlift their supplies to the region. The ultimate sufferer is of course the ubiquitous common man.

Although the Brahmaputra, known as the Borha Luit or the old red river -- or the Bor-noi meaning the big river --  along with  several of its tributaries, routinely devastates several districts every monsoon, its fury  is increasing by the year. Two reasons are being attributed for high floods: One, excess rainfall in the upper reaches of Arunachal Pradesh, the main catchment area and two, the rising river bed due to excessive siltation in the mighty river.

The Met department in the northeast says rainfall in Arunachal Pradesh has been nearly 25 per cent higher than normal for the past two years. Excessive rains, coupled with massive deforestation in the Arunachal hills have contributed heavily to the frequent floods. The deforestation in the hills has also led to massive chunks of soil coming down to the plains during the monsoons every year leading to siltation.

According to engineers of  Assam's Flood Control department nearly 2730.8 crore tonnes of silt has accumulated in the Brahmaputra between 1950 and 1997. It was in 1950 that a major earthquake completely changed the course of the river. Ever since then, the river bed near Dibrugarh in upper Assam has risen by as much as three metres.

As of now, there does not appear to be any immediate solution in sight for the perennial problem. The woes of the people in the northeast seem unending and the Brahmaputra is truly living up to its nickname: the "River of sorrow." And yet, on television we will endlessly keep discussing the arrival of the first monsoon showers in the metros and the subsequent water logging. The national newspapers will have the mandatory photographs of stalled cars and railway tracks submerged under water in Mumbai. I am not angry at this neglect; in fact I pity all those who cannot see beyond Delhi-Mumbai-Kolkata-Chennai-Banglore-Hyderabad, for their limited vision and reach.

Does any one ever discuss floods in the northeast? Does any one really care? If no one does, there is no point blaming the people of northeast for harbouring separatist tendencies.