Two IAF Garud Commandos Killed In Bandipora: Who Are Garuds? Here's All You Need To Know

This is the first time Indian Air Force commandos have been killed in an encounter in Kashmir. 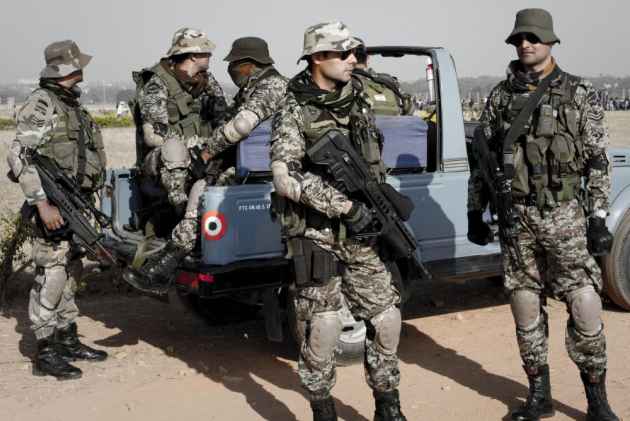 Two Garud commandos of the Indian Air Force, who were part of a joint security team, were killed in a gunfight with Lashkar-Taiba militants in north Kashmir’s Bandipora district on Wednesday morning. (Sergeant Milind Kishor and Corporal Nilesh Kumar died the gunbattle).
This is the first time Indian Air Force commandos have been killed in an encounter in Kashmir.
Established in 2003, the Air Commandos of Garud are one of the newest Special Operations Forces (SOF) units within the Indian armed forces. The need for a dedicated force was felt when militants attacked two air bases in Jammu and Kashmir in 2001.
The first batch of Garud commandos was unveiled on February 6, 2004. It was established with the intention of providing a versatile military capability specific to the requirements of the IAF. One of their main responsibilities during peace time is defending IAF's airfields.
In fact, it was Garud force that led the operation to flush out militants from Pathankot air base in January 2016.
The Garuds are trained along the lines of Navy's MARCOS and Army's Para Commandos and are trained to undertake airborne operations, airfield seizure and counter terrorism.
To earn the maroon beret, all recruits have to go through a exercise that lasts 52 weeks, the longest among the Indian special forces.
The next phase of training is imparted in conjunction with Special Frontier Force, Indian Army and National Security Guards. Those who make it through this process make it to the next phase.
Till 2015, there were approximately 1,200 personnel in the Garud force.
According to Mail Today, the IAF has also plans of expanding the size of its Garud forces as they are getting experience in anti-Naxal duties and getting specialised training with foreign countries.
The Garud commandos use the Tavor assault rifles imported from Israel and will get more of them in near future as the case for its procurement is under process. Right after the Pathankot attack, the Air Force had moved in a proposal to raise the fortification of its 54 air bases around the country, the tabloid added.
Some of the main roles of the force:
It acts as an emergency response team in case of a terrorist attack
Anti-hijacking and hostage rescue
Civil aid during natural disasters
Undertaking combat search and rescue missions
Special reconnaissance
Air assault