If the city of Mumbai symbolizes the hopeful face of globalisation in South Asia – standing for pluralism, enterprise and openness to ideas and investment – then the Pakistan-trained jihadists responsible for the carnage represent its darker twin. 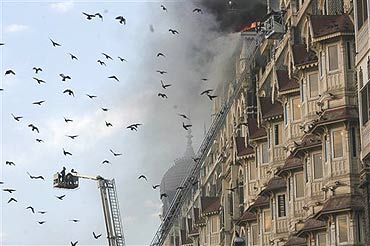 Even for India, which typically loses many more lives to terrorism in a year than most countries do in a decade, the November 26-28 attacks on Mumbai marked a watershed. For the first time, foreigners – Americans, Japanese, Israelis and Germans, among others – were among the nearly 200 dead and 295 wounded. The scale of the attacks, carried out in 10 places by 10 heavily armed jihadists, made the 2001 terrorist assault on India’s parliament appear almost trivial by comparison. In its audacity and ruthlessness, as well as in the wall-to-wall international coverage it attracted, the assault on Mumbai brought to mind 9/11 in New York and Washington, the bloody Chechen takeover of a school in Beslan in 2004 and the 2005 London suicide bombings.

In many ways, the victims of the carnage in Mumbai represent the integration of markets, peoples and ideas captured by that catchall word – globalisation. Both the hotels attacked, the Taj and the Oberoi, are mainstays of high-end business travel. If a global icon – say Bono or Bill Gates or Bill Clinton – has spent a night in India’s financial capital, odds are that he stayed in one or the other. The nearby Nariman House, home to the local branch of the Chabad-Lubavitch orthodox Jewish movement, served as an informal way station for young Israelis, familiar figures on the tourist trails of Asia. Leopold Cafe, where jihadists lobbed a hand grenade and sprayed diners with automatic weapon fire, has long been a backpacker favorite. All in all, the odds of the victims having multiple entry stamps in their passports, friends from more than one country on Facebook and a credit card welcome across borders in their wallets were incomparably higher than in any previous terrorist attack in India.

If the city of Mumbai symbolizes the hopeful face of globalisation in South Asia – standing for pluralism, enterprise and openness to ideas and investment – then the Pakistan-trained jihadists responsible for the carnage represent its darker twin. Carved out of British India in 1947 as a homeland for South Asian Muslims, Pakistan has long been a magnet for pan-Islamic radicals from around the world, among them Abdullah Azzam (1941-89), the ideological father of the anti-Soviet Afghan jihad, Al Qaeda’s Osama bin Laden and Ayman al-Zawahiri, and their comrade in arms Mullah Omar of the Taliban. A plethora of local groups, among them Lashkar-e-Taiba, suspected to be behind the Mumbai attacks, one of whose alleged operatives, Ajmal Amir Kasab [the name has been spelt differently in different reports so far -- Ed], was captured by Indian authorities, and Jaish-e-Mohammed, though organizationally distinct from Al Qaeda, share the same toxic ideology. The L-e-T was among the jihadist groups that banded together in 1998 under the umbrella of bin Laden’s Islamic Front for Jihad against Jews and Crusaders.

Along with Saudi Arabia, Pakistan is the world’s pre-eminent exporter of radical Sunni fervor. The country’s Inter-Services Intelligence (ISI), part of the army, in a sense pioneered the yoking together of modern-weapons training with pan-Islamic religious brainwashing, albeit initially with help from the Central Intelligence Agency. Many Pakistanis are moderate; nonetheless sympathy for radical Islam runs deep. A 2007 poll showed bin Laden with an approval rating of 46 percent, higher than that of many of Pakistani politicians. The radical Islamic outlook – obsessed with the glories of Islamic civilization, hostile toward non-Muslims and non-conformist women, and convinced that Jews and Americans are perpetually plotting against their faith – is shared by many who may formally disapprove of Al Qaeda’s tactics.

Until the most recent incidents in Mumbai, the consensus view in both New Delhi and Washington was that India – with its robust democracy, large middle class and world-beating companies – could sprint toward development despite its dysfunctional neighbor. But the capacity of a handful of terrorists to paralyze life in Mumbai and inflict several billion dollars worth of damage raise profound questions about the basic premise underlying India’s reach for great power status. It should give pause to even the hardiest optimist. Put simply, the world can no longer be certain that a failing Pakistan won’t take India down with it or, at the very least, hobble its efforts to catch up with East Asia.

For India, then, the challenge is not merely to do a better job of combating terrorism within its borders, or to attempt to assuage public anger through a token diplomatic tit-for-tat. New Delhi must also find a way to work with the international community to change the very nature of the Pakistani state. A good neighborly Pakistan will be one that does more than make appropriate noises after every fresh terrorist outrage. It will be a country that holds itself responsible for acts of violence originating on its soil, renounces grandiose extra-territorial ambitions in Indian Kashmir and Afghanistan, and focuses its energies on improving the abysmal levels of health care and education that rank it 136th of 177 countries in the United Nations Human Development Index.

A minimal first step will be to show good faith in what Islamabad now calls a shared fight against terrorism by handing over to Indian authorities Pakistan residents with civilian blood on their hands. Heading the list: the L-e-T leader Hafiz Mohammed Saeed and the Indian mafia don Dawood Ibrahim, a Karachi resident who orchestrated the 1993 Mumbai bombings that killed more than 250 people. Ibrahim is also suspected of using his underworld network to aid the most recent attacks. Terrorist camps on Pakistan territory, including those in the Pakistan-administered portion of Kashmir, must be closed in a way that is verifiable by the international community. Madrassas that have long stoked radicalism in the region – including Jamia Binoria in Karachi and Darul Uloom Haqqania outside Peshawar – must be given a credible ultimatum to either reform or be shuttered.

None of this is possible without dollops of international aid. But aid alone, however well-intentioned, cannot alleviate the problem unless properly directed. More pressing than the need for health clinics and new schools, or even support for Pakistan’s shaky democratic institutions, is military and educational reform. Over the medium to long term, Pakistan must cease to be what the Singaporean scholar Tan Tai Yong has called a "garrison state." Though the country spends a relatively modest 3.2 percent of gross domestic product on defense, according to Ayesha Siddiqua, an expert on the Pakistan military, its budget, official and unofficial, accounts for as much as 30 percent of government spending. Its army is beyond the control of its putative civilian masters, and reforming or re-orienting the ISI will be impossible as long as Pakistan’s generals continue to wield the kind of clout and wealth that would make a 1970s Latin American strongman blush.

Education reform will have to go much deeper than providing sorely needed infrastructure and boosting enrollment, especially among girls – only about one in three Pakistani women can read and write. The world needs to understand how Pakistanis view history, and find a way to strike a balance between a justified pride in Islam and a celebration of militarism and conquest. Madrassa students ought to be exposed to art, music and literature to see a world beyond the black and white of Koranic injunctions.

Needless to say, none of these measures are easy to implement. But as the carnage in Mumbai shows, and as jihadists the world over appear to instinctively grasp, our rapidly shrinking planet is not large enough for global capitalism and global radical Islam to exist side by side indefinitely.

Sadanand Dhume, a fellow at the Asia Society in Washington, DC, and the author of My Friend the Fanatic, a travelogue about radical Islam. His next book will examine the impact of globalisation on India. Rights: © 2008 Yale Center for the Study of Globalization. YaleGlobal Online