Truce Before The Storm?

Assam Chief Minister Tarun Gogoi is elated in an election year, because of the ceasefire agreement signed with the NDFB that comes into effect from June 1, but the future promises to be highly unpredictable, if not dangerous. 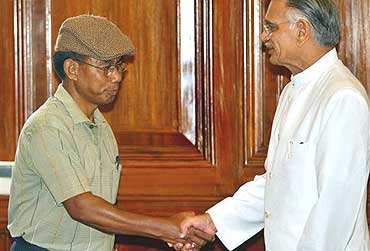 The Congress government in Assam is euphoric. Mainstream political and student leaders, besides former rebel chieftains, in the Bodo tribal heartland - spread over western and northern Assam - have managed a smile. After some uncertainty, the predictable has happened: the outlawed insurgent National Democratic Front of Bodoland (NDFB), fighting for a sovereign Bodo homeland since its formation on October 3, 1986, has signed a ceasefire agreement with the government. But events that could follow from this point on, promise to be highly unpredictable, if not dangerous.

The truce, inked in New Delhi on May 25, 2005, between the NDFB, the union government and the state government of Assam, is for a year to begin with, with effect from June 1, 2005. The outfit, headed by Ranjan Daimari, alias D.R. Nabla, its 'president', has an estimated 500 trained fighters, according to intelligence sources in the Assam Police, although its overall cadre strength is said to be around 2,000. These cadres will now have to stay put in designated camps set up by the authorities, and cannot move about with weapons. Besides, the group will have to furnish the government with a detailed list of cadres and the weapons in their possession.

Having accomplished step one in its peace efforts, both the Assam government and New Delhi appear happy. Assam Chief Minister Tarun Gogoi is particularly elated in an election year, because the NDFB had responded favourably to his September 30, 2004 offer of truce to all rebel groups in this state of 26 million people. The other frontline insurgent group in Assam, the United Liberation Front of Asom (ULFA) had rejected the call, but later indicated its desire for entering into peace negotiations with the government of India. New Delhi, on May 26, 2005, addressed a letter to ULFA 'Chairman' Arabinda Rajkhowa, inviting his group for unconditional peace talks - the immediate response was the assassination of a Congress party leader, Amrit Dutta, president of the North-west Jorhat Anchalik Panchayat and the executive president of the Dergaon Block Congress, who was shot dead in Jorhat, the Chief Minister's home constituency, by two ULFA gunmen, on the same day.

The stage is now obviously set for the beginning of a process of negotiations for a permanent peace between the government and the NDFB leadership. What is absolutely unpredictable at this stage is the possible shape of the deal with the NDFB and its fallout on Bodo politics, which has always been murky, to say the least. What can the NDFB bargain for? A Union Territory for the Bodos? Or a brand new autonomy package? Will that mean New Delhi can or will scrap the agreement that it signed in 2003 with the Bodo Liberation Tigers (BLT) to end that group's armed campaign for autonomy? Can there be a new Bodo accord without disturbing the one already in place, according to which the Bodoland Territorial Council came into existence? No player in the tortuous Bodo political arena has a clue, nor, indeed, does it seem that the Union or state governments have a game plan either.

As things stand today, a new turf war is bound to emerge the moment an agreement between the government and the NDFB takes shape. The war that has bloodied Assam's Bodo inhabited areas from the time the BLT emerged on the scene in 1996 could re-surface in various forms once again. The NDFB and the BLT have been bitter foes, the former fighting for an independent homeland and the latter, from the beginning, pushing for maximum autonomy for the Bodo ethnic group within the ambit of the Indian Constitution.

There is actually very little political space now vacant in the Bodo heartland, particularly since the BLT bid adieu to arms and joined the political and social mainstream after the agreement with New Delhi in 2003. The BTC, a 40-member elective politico-administrative structure, has been created under the terms of the agreement, three new districts were carved out, an allocation of Rs. One billion a year has been earmarked for the new Council, and most of the former BLT cadres have been absorbed in the paramilitary forces as part of a rehabilitation package.

Significantly, while the major mainstream Bodo forces, including erstwhile BLT members, the All Bodo Students' Union (ABSU) and others, had wholeheartedly backed the BLT-led autonomy campaign, they turned political rivals the moment the first elections to the BTC was announced. The BTC polls, held on May 13, 2003, witnessed former BLT 'chief', Hagrama Mahilary, openly campaigning against official candidates nominated by the newly floated Bodo People's Progressive Front (BPPF), despite the fact that the BPPF had the backing of the ABSU, and the former BLT, at least officially.

Indications of trouble have already emerged. Former BLT boss Hagrama Mahilary, while welcoming the NDFB-government truce, has made it clear that New Delhi must look for a solution without disturbing the existing BTC. On his part, Assam Chief Minister Tarun Gogoi has said in no uncertain terms that there is no question of conceding to any demand for a separate Bodo state. If that remains the government's position, the rebel group will have to be satisfied with another 'autonomy package'.

Whatever that may be, it will certainly have the potential to disturb the prevailing Bodo power equations. And the former BLT rebels could well be poised for a new turf war with the NDFB. There will, of course, also be other major political realignments, making the scene in Assam's Bodo heartland even more volatile. For sometime now, however, at least until the talks reach a decisive stage, a relative calm can be expected in the Bodo dominated areas, with all insurgent groups joining the peace bandwagon.