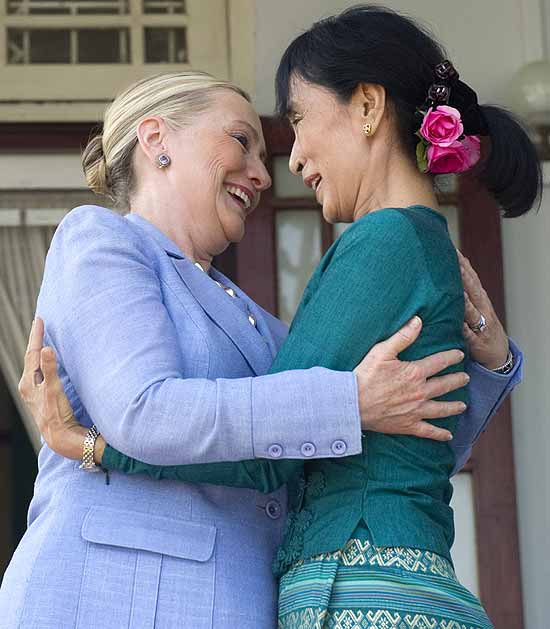 Eighteen months ago, no one would have anticipated that two of the world’s most eminent women, each arch critics of the Myanmar government from opposite sides of the world, could have reached supportive conclusions about changes in one of the world’s previously most repressive states.

The Western world’s icon of democracy Aung San Suu Kyi, after being held under house arrest for some 15 years since 1989, spoke positively about the reforms instituted by the new president of Myanmar, Thein Sein, a former military man who was prime minister under a junta anathema to the internal opposition and external Western powers: He is "committed to reform... I am sufficiently confident that I will be able to work together with him. I think the way is open for positive change." During the first week of December 2011, Hillary Clinton, on the first visit of a US secretary of state in half a century, spoke of the progress that had been made under the new government: “The United States is prepared to walk the path of reform with you if you keep moving in the right direction.” Both women want continued reforms and progress, but even their guarded optimism could not diminish what has been a startling and welcome set of changes. Whether they are ephemeral or sustainable is one critical issue.

The world is witnessing, with some incredulity, significant changes within a state that the United States, under both the Clinton and Bush administrations, had expected could only be reformed and relieved of its “pariah” status through “regime change,” a policy both assiduously pursued. Some believe that democracy, however defined, is just around the corner, while others consider these reforms are simply window dressing for continuing military control and the denial of democracy and a better life for the diverse Burmese peoples.

Neither are correct. A half century ago, after the coup of 1962, the military formed the Burma Socialist Programme Party under military domination and stipulated that once one joined the party, one could never resign, thus indicating its attempt to hold perpetual control. The motto over the gate of the Myanmar Military Academy sums up the attitude of the Tatmadaw, or armed forces, “The Triumphant Elites of the Future.”

The military has ruled directly and indirectly throughout most of Burma/Myanmar’s independent history since 1948. Under the new government headed by Thein Sein, inaugurated in the spring of 2011, that control continues through a number of constitutional provisions. These constitutional controls are supplemented by a pervasive government party that swept 80 percent of the legislative seats and is military dominated.

The Tatmadaw has continuously articulated its core concerns. Primary is that the military is the only institution that can hold the multiethnic state together, and thus its continuing role is essential. National unity and state sovereignty are vital, and the military’s responsibility in maintaining them have been pursued with a bombastic vigor that is not simply propaganda, but reflects deeply held nationalistic sentiments. If these elements and military autonomy within the state structure are maintained, for the military are highly patriotic, then reforms are possible in economic, political and social fields. The Tatmadaw is aware of its poor reputation both internally and abroad, and seems intent on attempting to improve its image.

But if the reformers are sincere, and it seems that at least at the apex of administrative power this is evident, then why now? Cynics point to the desire of Myanmar to host the 2014 ASEAN summit, which they did not do in 2006 when their first turn was scheduled, assigned through alphabetic order, as a prime motivating factor. The critics maintain that these reforms should be discounted as superficial changes, likely to be reversed after that date.

The reasons are likely more complex. There seems little doubt that receiving approval from ASEAN to hold the 2014 chair was a factor. But Myanmar may also have wanted to ensure that it would not become overly dependent, or perceived so, on China, the source of much of its economic aid, investment, infrastructure development and military assistance. Myanmar has also been inundated with illegal Chinese immigrants – by some estimates 2 million. Myanmar thus sought improved relations with the US and relaxation of the sanctions regimen to achieve a balance-neutralism that’s been its policy since independence.

Since the Obama administration came into office, it’s evident that both Myanmar and the United States have sent signals calling for improved relations. The US wanted Aung San Suu Kyi and other political prisoners freed, and Myanmar wanted relief from sanctions. In July 2009, the US signed the treaty of Amity and Cooperation with ASEAN, which it had not done before because of Myanmar’s membership, and the Obama administration also quietly dropped the cry for “regime change” and opted for “pragmatic engagement” – keeping the sanctions that Congress in bipartisan manner had approved, but adding high-level engagement.

Other possible causes may have prompted the current reforms. Power is now somewhat diversified, without arbitrary top-down leadership. Until 2011, Myanmar had a singular source of power – Senior General Than Shwe. No one seemed willing to disagree on any policy or challenge him. His arbitrary rule was law, and he is said to have a dislike for Aung San Suu Kyi. He is supposedly aged and retired, caring only for protecting the core military concerns and influence, as well as the safety of his family.

The highly nationalistic military is also concerned for its historic reputation. They have rewritten Burmese history to stress their role. Refurbishing the Tatmadaw’s reputation through improving the previously inept economic performance of the military to date, and allowing a significantly expanded space between the state and the citizens, are elements of this attempt to restore the military’s lustre and good reputation earned by its success in securing independence from the British in 1948.

So diverse motivations and circumstances are likely responsible for the unexpected change in attitudes. Sending Clinton to Naypyidaw was both strategically and tactically influential in improving relations with Myanmar.

Strategically, it was the most vital signal the Obama administration could send that did not require intense negotiations with the US Congress and using up valuable political capital for no ostensible domestic benefits. Myanmar is not high on any political list of US priorities. Yet the visit has strengthened Myanmar’s reformers, who can attest that the reforms are having a positive effect. If there had been no substantive response from the US, the strong anti-reform elements within the Tatmadaw could claim that the reforms were ineffective and should be rescinded. By responding positively to the reforms and reformers, the US is strengthening the likely continuity of those changes.

Tactically, the manner of the effort was also significant. President Barack Obama’s personal call to Aung San Suu Kyi and her endorsement of Clinton’s visit have pre-empted the congressional critics, and those in the anti-military human rights and expatriate groups, challenging their condemnation of the visit; all they can do is call for caution.

The game is afoot and the outcome uncertain, but we have witnessed progress unanticipated, at a pace unheralded, and in fields hitherto unrecognised by the Burmese administration. It has taken 50 years to reach this far. We can only hope that the engagement and reforms will continue.

David I. Steinberg is Distinguished Professor of Asian Studies, School of Foreign Service, Georgetown University. His latest volumes are Burma/Myanmar: What Everyone Needs to Know (2010) and, with Fan Hongwei, Modern China-Myanmar Relations: Dilemmas of Mutual Dependence (2012) Rights:Copyright © 2011 Yale Center for the Study of Globalization. YaleGlobal Online