The Stork Has Delivered A Message: Save The Wetlands

More from Anupam Bordoloi
View All

As the merciless June Sun blazed down on the plains of North India, a male black-necked stork was rummaging for food on a wetland just outside Delhi, when it came upon what would have appeared to it as a snail – black and round. Like all other birds on that wetland, once a pristine water body that is now a garbage and waste-filled dump, the stork acted on its avian instinct– dipping its long, powerful beak to test the “food” it had found.

It would have been just another day on just another marsh for just another stork. But the “food” turned out to be a rubber bottle stopper and it stuck on the stork’s beak, shutting tight like a ring and preventing the bird from opening its mouth.

For all practical purposes, the black-necked stork -- classified as "near-threatened" – was as good as dead; it was only a  matter of time before lack of food and water would claim yet another life from India’s rapidly disappearing wildlife. But for a good samaritan who saw the struggling bird at Basai in Gurgaon and postednew a photo on social media.

Since that moment, it became a desperate, race against time for amateur birders and forest department personnel to save the stork – which was to later become a symbol of the pressures of a rapidly increasing urban landscape on wildlife and the environment. 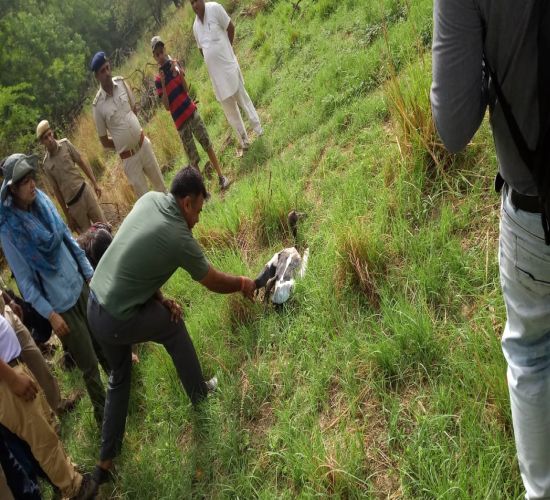 A group of avian experts spent five days on the wetland before they were finally able to catch the stork and free it of that the piece of rubber. Hand fed water and fish for the next few days and nursed back to health, the stork was released on Friday at the Sultanpur National Park,

It’s a kind of feel-good story with a happy ending, one which shows that good things do happen on and through social media.

However, beyond the story of the stork are the warning signs of the times we live in –urbanity transgressing into areas which should be left for wildlife, human violation of landscapes that leaves plastic and other non-biodegradable waste like the rubber stopper which nearly killed the stork.

Environmentalists including the  Delhi Bird Foundation  have been demanding that the Basai area be declared a protected area and plans to build a factory for recycling construction waste shelved. 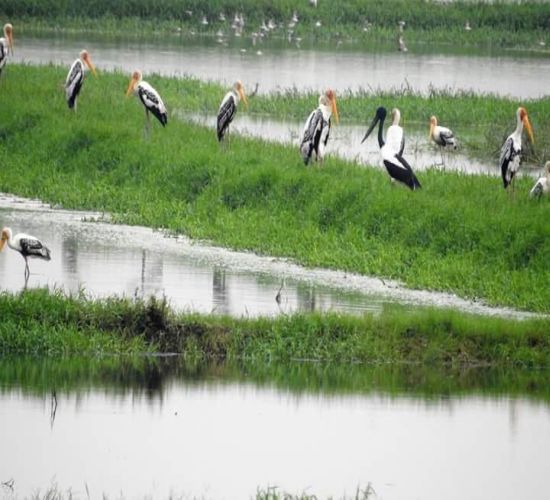 Every winter, the Basai wetlands turns into a temporary home for migratory birds from around the world.

“Basai is a fine wilderness and needs protection and identification as a wetland. This is not an open area to dump garbage. The adjacent wetlands of Najafgarh jheel, a drain from Sahibi river and Sultanpur park provide a wetland complex which is used by thousands of resident and migratory birds. Basai alone gets more than 239 bird species,”environmentalist Neha Sinha tells Outlook.

“These are Delhi-NCRs last wildernesses and open areas. With rising air pollution and degrading quality of life, we need these biodiverse open spaces."

And one of the biggest contributors to degradation of urban wetlands is plastic waste.

According to a 2015 report by the  Central Pollution Control Board (CPCB), a statutory organisation which keeps an eye on pollution, India produces 25,940 tonnes of plastic waste every day. Delhi alone contributes 700 tonnes per day, the highest among all cities.

And it is always the wetlands – water bodies, ponds, rivers, natural drains –  which suffer as they are invariably turned into dumping grounds for urban waste.

Prerna Singh Bindra, a former member of the National Board for Wildlife and author of the best-selling  The Vanishing : India’s Wildlife Crisis, says wetlands are considered wastelands and hence their protection has never been a priority for the successive governments. But  wetlands are particularly valuable to urban areas  to recharge groundwater  and help control floods.

She cites the new Wetland (Conservation and Management) Rules 2017 to drive home her point.

“The new rules have diluted the earlier guidelines, leaving out about 65% of the wetlands. This opens up the scope for diverting prime wetlands as real estate like construction of malls and multiplexes,” Bindra tells Outlook.

She was also critical of the government’s disbanding the  National Wetland Development Authority, as well as eleminating the need for Environment Impact Assessments for projects.

For once, a stork has delivered a message: act now.