The Man In The Middle

In 1969-70, the deepening divide within the Congress led to the decisive split and victory for Indira Gandhi after YB Chavan betrayed the Syndicate leaders in the CWC. Now it is the role Pranab Mukherjee which is, to say the least, curious. 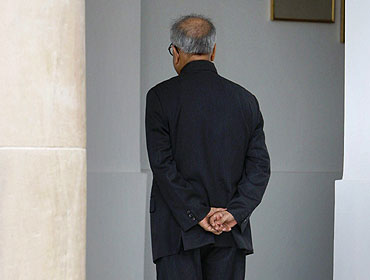 Then, as now, the narrow interests of opposition parties dovetailed into the larger ideological conflict. That rendered the final outcome unpredictable. Then it was USSR against USA. Now it is powerful infighting lobbies both within China and the US slugging it out. President Hu JIntao has indicated China's support for India's nuclear energy aspirations. But political forces committed to China within India are working overtime to scuttle the deal. Is this with President Hu's tacit approval? Or does President Hu not speak for all opinions within the Chinese government? In the US the influential New York Times, voice of America's powerful east coast establishment, has editorially expressed serious reservations about the deal. Meanwhile the Bush administration desperately attempts to clinch it.

Polarization of national politics occurs when the government itself splits. In 1969-70 the deepening divide within the Congress led to the decisive split and victory for Indira Gandhi after YB Chavan betrayed the Syndicate leaders in the Congress Working Committee. In recent days the conduct of MEA Minister Pranab Mukherjee has been, to say the least, curious. At June end Mrs Sonia Gandhi indicated UPA support for the deal by asking Congressmen to gear up for early polls. On the very same day Pranab Mukherjee visiting Punjab for a functionsaid there was no hurry to go ahead with the nuclear deal.

This week Mukherjee's utterances became even more curious. The PM had said earlier that he would go for the G-8 meeting only if he could proceed with IAEA in Vienna. When his visit to G-8 was finalized sections within the Left understood the implications. They said that since he was going to IAEA they should withdraw support. Others prevailed on them to wait till there was a formal announcement. They had written to Mukherjee for clarification and awaited his response. There was no compulsion for Mukherjee to shoot off a quick reply. He did so, reiterating that they would be informed when the government would go to IAEA. On flight to Tokyo the PM told media that the government would go to IAEA 'soon". This added nothing new to what he had already indicated: that he would attend the G-8 conference only if his government would proceed to IAEA. His flight to Japan indicated as much. The Left very well knew what it implied. But this remark on the flight was seized as excuse to withdraw support while the Indian PM was meeting world leaders in a summit. Never mind if this violated the most basic democratic norms about bipartisan foreign policy while the PM was abroad – all is fair in hate and political war!

It was at this critical moment that Mukherjee delivered what could have proved to be the crucial knockout punch against the deal. Even before the Left met with President Pratibha Patil to hand over the papers of formal withdrawal, Mukherjee stated that the government would seek a vote of confidence before it proceeded to IAEA. Was this a stab in the back of the nuclear deal, which he is negotiating with the Left on behalf of his government? Was his statement cleared by party president Sonia Gandhi?

That does not matter. What matters is that after the Left withdrew support the President uncharacteristically became pro-active. She sent a message to the PM to meet her on his return on Thursday. He would in any case have done so in normal circumstances to brief her on the G-8 summit. The President can recommend the opposition to seek a no-confidence vote if it wants to. Her summons to the PM when he was abroad suggests otherwise. She might now ask the government to seek a trust vote before or after parliament reconvenes on August 11. If the trust vote will be before parliament reconvenes she can set the date.

Had the trust vote been taken after the deal was clinched in the normal schedule the chances for the UPA to cobble a majority before the trust vote would have been brighter. Pranab Mukherjee's commitment of a prior trust vote dampened prospects. The President's summons to the PM heightened chances of defeat. So the government at midnight operationalized the nuclear deal by having the draft circulated in the IAEA. It was a coup. The nuclear deal will now be on auto-pilot regardless of what happens to this government.

It is clear that the government spoke with two voices. The manner of proceeding with the IAEA will doubtless create a political uproar in the country. The question is: was the government dumb or divided? As mentioned at the start of this article the powerful international vested interests and the strong domestic survival interests of various politicians and parties renders alignments for the trust vote unpredictable. Add to this the possible covert division within the government. All these add up to a potential for polarizing national politics. It remains to be seen how Pranab Mukherjee and other Congressmen react to the government's move to activate the IAEA. Mukherjee's personal fortunes in the next poll are tied to support by the Left parties which extended crucial help in his last election. If Prakash Karat still seeks a Left dominated government of a new front there would be few more qualified candidates for PM than Mukherjee.

How will the dice roll? Will this crisis lead to a national polarization of political forces or will it end with a whimper? The next fortnight should tell us.