Sections of the media have gone to town with allegations of the Karmapa being a Chinese spy. This is a sensitive issue which needs to be handled firmly but with care 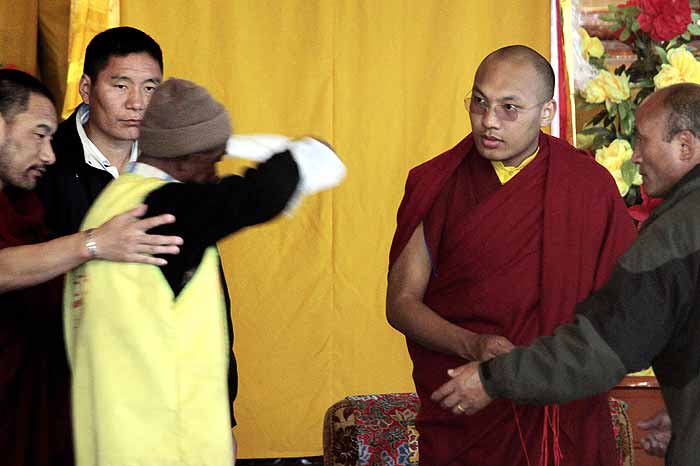 There has been a controversy regarding the present 17th Karmapa ever since the death of the 16th Karmapa, Rangjung Rigpe Dorje, in 1981.Claims were made on behalf of the following two persons that they were the real incarnation of the deceased 16th Karmapa — Ogyen Trinley Dorje (also spelt Urgyen Trinley Dorje) and Trinley Thaye Dorje

Both were enthroned by their respective followers as the 17th Karmapa, and both independently started performing ceremonial duties as the Karmapa. The majority of the monasteries and lamas of this sect recognized Urgyen Trinley Dorje as the Karmapa. However, a small number of monasteries and lamas of the sect including Shamar Rinpoche, who plays an important role in the selection process, did not allegedly recognize his claim. The Chinese Communist Party recognized his claim as the 17th Karmapa.

Urgyen Trinley Dorje enjoys considerable support—though not total support— among the followers of what is considered the oldest sect of Tibetan Buddhism. His support for the process for the selection of the successor to His Holiness the Dalai Lama could, in Chinese calculation, lend credibility to the child projected by the Chinese Communist Party as the incarnation of the present Dalai Lama after his death.

As this controversy over the Panchen Zuma was picking up momentum in the late 1990s, the 17th Karmapa, who himself is a controversial figure, landed by a taxi in Dharamsala, where His Holiness lives, on January 5,2000.He claimed that he had given the slip to the Chinese and clandestinely fled to India via Nepal because he was unhappy in Tibet and was not able to get his spiritual education completed in Tibet since most of the senior religious scholars of his sect were living in India.

Questions arose regarding the genuineness of his claim. Did he really escape clandestinely after giving a slip to the Chinese as claimed by him or was it a choreographed escape organized by the Chinese intelligence to create a split among the followers of His Holiness the Dalai Lama, undermine his authority and project the Karmapa as the interim head of the Tibetan Buddhists after the death of His Holiness till the Dalai Lama’s successor is chosen by the Chinese Communist Party by stage-managing the identification of the child who is his incarnation.

Faced with this scepticism, the Karmapa explained how he escaped from Tibet at a media interaction on April 27,2002. He said as follows:

“On December 28, 1999, under the cover of a dark night, my senior attendant and I escaped from my monastery in Tibet and fled to India to seek refuge. The decision to leave my homeland, monastery, monks, parents, family, and the Tibetan people was entirely my own—no one told me to go and no one asked me to come. I left my country to impart the Buddha's teachings in general and, in particular, to receive the excellent empowerments, transmissions, and instructions of my own Karma Kagyu tradition. These I could only receive from the main disciples of the previous Karmapa, Situ Rinpoche and Gyaltsap Rinpoche, who were predicted to be my teachers and who reside in India.

“There have been various reports in the press about my escape, and so I will simply and briefly tell the truth about my journey. In great secrecy, my companions and I made our plans, using various stories to cover our true activities. For example, when the preparations were complete, I announced that I was entering a traditional, strict retreat and would not come out for some days. This story worked and prevented us from being pursued right away.

“On December 28, around 10:30 at night, my attendant and I slowly climbed down from my room and jumped onto the roof of the Protector Mahakala's shrine room. From this building, we leapt to the ground where a jeep was waiting nearby with Lama Tsultrim and a driver. We left immediately. The story had been given out that Lama Tsultrim and his companions were going on a journey. As if preparing for this, they had driven in and out of the monastery several times during the day, and, therefore, everyone knew about this trip and we could easily leave. Usually, the monastery was strictly guarded, but no twenty-four hour guards were posted and we also left through a side road.

“After a while, Lama Tsewang and another driver joined us at a designated place. We decided to head directly towards western Tibet since few travelers used this road and the check posts were not so strictly guarded. Driving day and night, we stopped only to change drivers. By taking back roads through the hills and valleys, we evaded check posts and two army camps. Through the power of my prayers to the Buddha and through his compassion, we were not discovered and arrived in Mustang, Nepal, on the morning of December 30, 1999. Continuing the journey on foot and horseback, we crossed over several passes and finally reached Manang as I had planned. This part was extremely difficult and exhausting due to the poor and often dangerous condition of the paths and the freezing cold weather. During this time, I was tired and not very well physically, yet despite the difficulties, I was completely determined to reach my goal.

“Once in Manang, a close friend of Lama Tsewang Tashi helped us hire a helicopter. We landed in a place of Nepal known as Nagarkot and then went by car to Rauxal. From there, we travelled by train to Lucknow and continued with a rented car to Delhi, arriving at last in Dharamsala early on the morning of January 5, 2000. I went straight to meet His Holiness the Dalai Lama, the very embodiment of compassion, and he received me with his great love and affection. My joy knew no bounds."

The scepticism regarding the genuineness of his claim has since subsided, but not completely. Some—including this writer—suspect that his “escape” to India was probably under a long-term Chinese intelligence operation to use him to influence events relating to Tibet after the death of His Holiness. It would not be correct to call him a Chinese spy meant to collect intelligence about His Holiness and his followers. The suspicion is that he could be a planted Chinese “agent of influence” to influence future events after the death of His Holiness.

The government of India has allowed him to travel periodically within India to perform his religious tasks and obligations. He was also allowed to visit the US in 2008 to meet his followers there.

The scepticism regarding him has revived following the alleged seizure of currencies of different countries —including China— amounting to a total value of US $ 1.5 million from his office and from persons associated with him in Dharamsala in recent days. An investigation has been started as to how he got this money and for what purpose. The Karmapa himself and his principal aides have been questioned. They are reported to have claimed that this amount represented the cash offerings of his followers visiting Dharamsala to seek his blessings and by his followers in other parts of India and abroad during his travels. This explanation sounds plausible.

Shri P.Chidambaram, the Home Minister, told the media on January 31 that since the matter was under investigation, he was not in a position to come to any conclusions till the investigation was completed. His Holiness has supported the investigation without saying anything further.

Sections of the media as usual have gone to town with allegations of the Karmapa being a Chinese spy. The Chinese Communist Party has strongly refuted these allegations. A report on this subject carried in the “People’s Forum” section of the party-controlled People’s Daily of China on January 31 would be of interest

This is a sensitive issue which could have an impact on state-to-state relations with China and could hurt the feelings and sensitivities of the followers of the Karmapa. We should carry out a vigorous investigation, keeping the Holiness in the picture, and await the results of the investigation as suggested by the Home Minister. We should avoid speculation that could prove counter-productive.

B. Raman is Additional Secretary (retd), Cabnet Secretariat, Govt. of India, New Delhi, and, presently, Director, Institute For Topical Studies, Chennai, and Associate of the Chennai Centre For China Studies.