The Hawks Strike Back

Tragedy, drama, farce: it is almost as if the peace process in Jammu and Kashmir (J&K) is being authored by someone who has a day job scripting television soap opera. Updates 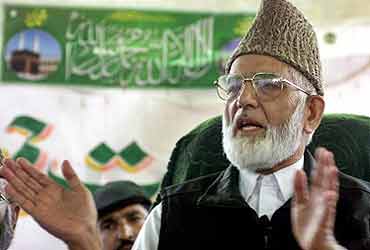 Tragedy, drama, farce: it is almost as if the peace process in Jammu and Kashmir (J&K) is being authored by someone who has a day job scripting television soap opera.

On August 1, the Jamaat-e-Islami readmitted hardline Islamist leader Syed Ali Shah Geelani to its ranks, and announced its intention to revive its Political Affairs Committee, a body it had shut down last year as part of a long-running moderate initiative to extricate the organisation from secessionist politics in J&K. The decision was announced at the end of a two-day meeting of the Markazi Majlis-e-Shoora [Central Consultative Council], the Jamaat's 25-member executive. A Jamaat spokesperson announced that Geelani would be free both to hold membership of the organisation as well as his newly-launched party, the Tehreek-e-Hurriyat. Most important of all, the Jamaat decisively broke ranks with the centrist All Parties Hurriyat Conference (APHC) faction, until recently led by the Shia cleric, Maulvi Abbas Ansari.

Geelani's return to the Jamaat marked a humiliating defeat for the centrists. Days earlier, Geelani had announced that he planned to hold a meeting of the Arakeen Ijtimaa, or convention of empanelled members, at the Jamaat's offices on August 8. Nasir Ahmad Kashani, the Amir or chief of the Jamaat, had claimed the move violated the Jamaat constitution, arguing that, as the Amir, calling such a convention was his exclusive prerogative. An electoral college of about 2,000 empanelled members had elected Kashani as Amir for a three-year term in 2003, along with the 25 delegates to the Markazi Majlis-e-Shoora. Kashani had, at the time, beaten off a tough challenge from Geelani's political protégé, Mohammad Ashraf Sehrai. He then refused to help Geelani's campaign against the centrists in the Hurriyat, and secured the hardliner's removal from the frontlines of the Jamaat - braving direct threats to his life from the Hizb-ul-Mujaheddin (HM) leadership.

What explains the turn-around in the Jamaat? Kashani isn't talking, but one explanation is that the Jamaat Amir feared a vertical split in the organisation. Five of the six district presidents of the Jamaat in the Kashmir Valley threw their weight behind Geelani, support perhaps linked to none-to-discreet lobbying by the Pakistan-based leadership of the HM. Although Geelani did not have the backing of the bulk of the Jamaat's basic membership, he did appear to command a majority in the district of Baramulla, and a solid following in Srinagar and Kupwara. By contrast, the moderates in the Jamaat were unable to carry the fight to their rank-and-file, afraid of terrorist attacks. Kashani was unable to safely travel even in the moderate strongholds of Pulwama and Kulgam. He could also have been concerned about the chaos among the Hurriyat moderates, and fearful of being caught, so to speak, on the wrong end of a rotting bough.

Outside J&K, the full import of these events has been little understood - most notably the enormous significance of the reversal within the Jamaat. In 1997, G.M. Bhat, the then-Amir of the Jamaat, came out of jail, gave an interview calling for an end to the "gun culture", and set about distancing the organisation from the HM. Geelani was incensed, but the tide was against him. In the spring of 1999, former Hurriyat chairman Abdul Gani Bhat called for a dialogue between mainstream political parties and secessionists, a marked departure from the organisation's demand for a three-way dialogue between itself, India and Pakistan. Both the leaders' initiatives laid the ground for dissident HM commander Abdul Majid Dar declaring a unilateral ceasefire in July 2000 - which the then Prime Minister Atal Behari Vajpayee promptly reciprocated.

Vajpayee's ceasefire fell apart six months later: Islamist groups simply had no interest in participating in a dialogue that would lead to their marginalisation, and Pakistan was, predictably, uninterested in a peace process whose structure it did not have a role in shaping. Terror, then as now, was the instrument chosen to silence the doves. Bhat's enthusiasm for dialogue dulled considerably after a near-successful February 22, 2001, attempt on his life. The General Council of the Hurriyat, in turn, rejected the Centrists' calls for direct dialogue after a grenade went off during the meeting called to discuss the issue. Dar, too, was shot dead by his one-time Hizb comrades on March 23, 2003. At a 2001 remembrance of the assassination of Mirwaiz Umar Farooq's father, Mirwaiz Mohammad Farooq, armed men gathered around the rostrum and shouted Bhat down. Exactly a year later to the day, key moderate leader Abdul Gani Lone was assassinated, making clear the costs of pursuing peace.

Lone's assassination - for which his son and political heir Sajjad Lone publicly held Geelani responsible - constituted a setback, but did not put an end to the peace process. Behind the scenes, the Jamaat Amir, Bhat, also worked quietly to strengthen the HM dissidents. Shortly before his arrest in the build-up to the 2002 Assembly elections, Geelani found himself increasingly forced to turn to fringe extreme-right organisations outside the Jamaat-e-Islami, like Nayeem Khan's Kashmir Front and Shakeel Bakshi's Islamic Students' League. Matters came to a head soon after, with Geelani refusing to attend Hurriyat executive meetings unless Sajjad Lone was expelled for having put up proxy candidates in the Assembly elections. In May last year, the Jamaat moderates hit back, 'retiring' Geelani as their political representative in the Hurriyat and refusing to back his Islamist faction of the secessionist coalition.

From early this year, the Islamists began to retaliate. They clearly understood the central problem: no Government in New Delhi could make the kind of concessions that Pakistan would find acceptable, or that the moderates could sell - and the moderates, in turn, could not deliver the de-escalation in hostilities New Delhi desperately needed. A string of terror attacks on individuals close to Mirwaiz Farooq were used to drive home to the moderates the consequences of bucking the Islamist fiat. Mirwaiz Farooq's efforts to buy peace with a section of the Islamists, by attending the last rites of slain terrorist Rafiq Ahmad Dar, provoked Sajjad Lone to leave the ranks of the moderates. Ansari finally responded to the deteriorating security situation with panic, and abandoned his post at the bridge of the moderate APHC.

Where might events go from here? It seems unlikely that Mirwaiz Farooq, the most visible moderate Hurriyat leader, will be willing to assume a vanguard role in the near future. Apart from his political and security concerns, sources indicate, personal considerations have imposed considerable pressures on the religious leader. Command of his religious organisation, the Anjuman-e-Nusrat-ul-Islam, passes from father to son, and Farooq, who married three years ago, is yet to sire an heir. The family is deeply concerned about the risk of assassination, and wishes him to stay distant from controversy until an heir is born. Mirwaiz Farooq has bucked this pressure in the past, but is now likely to focus his attentions on bringing about some kind of rapprochement within the Hurriyat factions. As such, further dialogue between the moderates and New Delhi seems a distant prospect.

Kashani and his fellow moderates will closely watch the course of events in Geelani's new party. If Geelani is unable to attract a significant number of Jamaat rukuns, or rank-and-file members, the moderates could once again move to contain his authority. Yet, the ongoing chaos could not have come at a worse time for New Delhi. On the edge of talks with Pakistan on the future of J&K, Indian strategists have found their ace - direct negotiations with moderate secessionists - has been stolen from the pack. It is hard to say, of course, whether the peace process is actually dead - it might just be comatose, or even just lying there with its eyes closed, waiting for an opportunity to spring to life and surprise the villain - but signs are, the next few episodes will be filled with bloodshed.