That was the spontaneous reaction of West Bengal Chief Minister Buddhadeva Bhattacharya when he was informed by reporters that Sharad Pawar, had won the BCCI presidential election, defeating Ranbir Singh Mahendra of the Jagmohan Dalmiya camp, by 20- 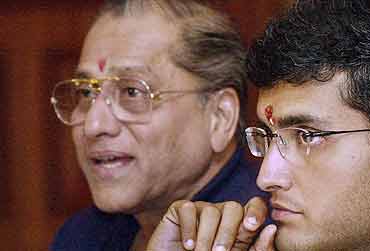 That was the spontaneous reaction of West Bengal Chief Minister Buddhadeva Bhattacharya when he was informed by reporters that Sharad Pawar, union agriculture minister and Maharashtra cricket chief, had won the BCCI presidential election defeating Ranbir Singh Mahendra of the Jagmohan Dalmiya camp, by 20-11 votes.

It perhaps sums up the feeling of many who have witnessed Jagmohan Dalmiya's 21-year-old monopoly over the cash-rich sports body. Apart from factionalism in the board, close observers had also been deeply upset at the way the board elections had been reduced to a gimmick.

The resounding verdict, in many ways, though expected, was still a pleasant surprise as stories of intrigue and backroom manoeuvers did the rounds routinely before the highly surcharged 76th Annual General Meeting in Calcutta. In the end, victory was not limited to the post of the President. It was a total washout for the Dalmiya camp, as the challenger Pawar camp won all the other top posts by an identical 18-13 margin: Niranjan Shah defeated Gautam Dasgupta for the secretary's post, M P Pandov became the new joint secretary beating Brijesh Patel and N Srinivasan was elected as the new treasurer after his victory against Jyoti Bajpai.

The elections, conducted by Supreme Court-appointed observer T S Krishnamurthy, passed off smoothly with the former Chief Election Commissioner having clearly spelt out the guidelines in advance.

The recent controversy over l'affaire Ganguly, starting with coach Greg Chappell's leaked e-mail,strategically timed with the elections in September that had to be put off, and once again his inclusion in the test team were seen in many quarters as a blatant ploy to divert the spotlight from the bizarre goings-on in the contentious BCCI elections.

As they approached again, first we had the selectors sacking Saurav Ganguly from test captaincy citing his indifferent record in recent months. The next day he was selected for the first test against Sri Lanka, by the same set of five wise men - the decision was said to be unanimous, but it was widely reported that it was 3-2, with pressure from the top. And on Friday, as the Indian team stepped on the Eden Gardens, they were shocked by the absolute green top prepared for them under the guidance of the Cricket Association of Bengal headed by Jagmohan Dalmiya. After defeating the SA on a turner, the Indian team had specifically asked for the grass to be mowed down, and at least expected, if not a turner, a batting friendly pitch. The hosts, in short, had been given a pitch that suited the visitors.

And then a section of the crowd at the Eden Gardens stepped into the picture, jeering the Indian team and cheering the dismissals of Dravid and Tendulkar and chanting anti-Chappell slogans: "Dada is dada, Chappell is gadha" (Dada is big brother, Chappell is a fool), "Chappell hatao, desh bachao" (remove Chappell and save the country) and "Saurav, the forgotten hero". The controversy was fuelled later when 'Tetras Communication', a local production house released a blurred screen-grab of a provoked Chappell showing the finger to the crowd.

With the change in guard, the changes in the selection committee were only to be expected. And the three changes announced by the newly-elected Board today surprised no one. The three selectors who voted for retention of Saurav Ganguly in the test team have all been replaced. Bhupinder Singh Senior was appointed as the North Zone representative in place of Yashpal Sharma while Ranjib Biswal was appointed for the East Zone in place of Pranab Roy. Sanjay Jagdale makes a return to the committee replacing Gopal Sharma as Central Zone member.

But obviously, it would be unfair to pass any judgement on Saurav Ganguly's cricketing career as of now, and reduce it merely to a faction fight in the BCCI. It would only be for the better for cricket if the board and the selection committee live up to their avowed intention of being transparent. So far Niranjan Shah, the newly-elected BCCI Secretary, has made all the right noises: "It is not because we have come to the power Ganguly has to go. It is up to the new Selection Committee to select the national side keeping in mind the best interest of Indian cricket."

On his part, Dalmiya, considered to be Ganguly's mentor, was forthright: "It is too uncharitable to say that Ganguly came to the team because of anybody's recommendations. He came on his own ability and performance. He did not need a godfather. Saurav still has three to four years of cricket left in him." Asked if he would stand by Saurav again if he faced injustice, Dalmiya said, "Not only Ganguly, I have always stood by players in my humble way."

Shah says his first task would be to make the Board a more professional organisation. "My plan of action is to trim the BCCI administration and make it a more professional organisation." Among the pressing tasks before the new regime would be to take a decision on the contentious telecast rights issues for cricket matches to be played in India in the next four years and the finalisation of itineraries for the series against Pakistan and England. The contracts for players as well as sponsors for the Indian team would also have to be finalised.

Former BCCI chief Raj Singh Dungarpur was more vocal in pressing for reforms: "The captain and coach must be given voting rights. It is the coach who has a big role in making policy decisions and it is the captain who implements them on the ground. So they must have a decisive say in selection meetings,"

Dungarpur, a staunch supporter of newly-elected Board President Sharad Pawar, has also called for the appointment of a CEO to run the Board. Asked to make an assessment of coach Greg Chappell, Dungarpur added, "he is doing an outstanding job. He is giving exposure to all the 14-15 players in the squad." He said earlier established players in India used to take their place in the team for granted but Chappell had changed all that. I feel when we have brought him, we should use him to the full."