Telangana Baba Dreams Of Underground Shiva Linga, Digs Up National Highway Along With Sarpanch And Villagers

The baba was seen performing puja, chanting ‘Om Nama Shivaya’ and shaking his body vigorously as if he was under the influence of some 'divine power' while believers thronged the spot in hope to witness the miracle. 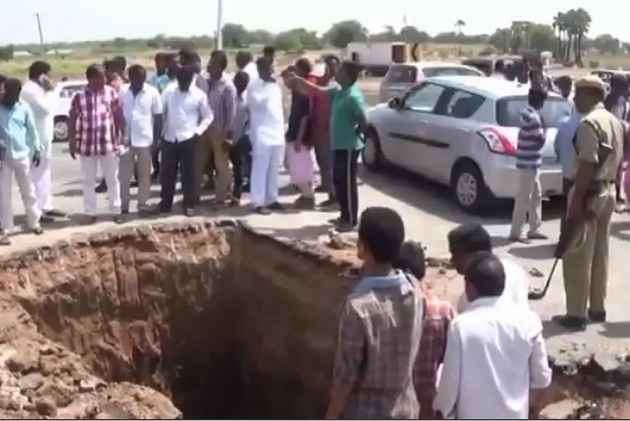 A self-proclaimed baba in Telangana got the sarpanch and some other people from his village to dig up the national highway to find a Shiva Linga that he claimed to have seen in his dream.
The Hindu reported that the incident occurred near Tangutur on the Hyderabad-Warangal road on Monday morning after 30-year-old Lakhan Manoj, claimed that Lord Shiva had come to his dream and asked him to build a temple in the place where Shiva Linga was buried.
A video of the incident has now come out where Manoj is seen performing puja, chanting ‘Om Nama Shivaya’ and shaking his body vigorously as if he was under the influence of some 'divine power' while believers thronged the spot in hope to witness the miracle. The road was dug up using a JCB as several onlookers stood by.

According to the report, the sarpanch of Jangaon Balne Siddu Lingam and municipal vice-chairman Nagarapu Venkat believed Manoj’s words.
Even after digging 20 feet, they could not find anything except that the excavation created a traffic jam on the national highway. Later, the police arrived arrested the persons involved in the work.