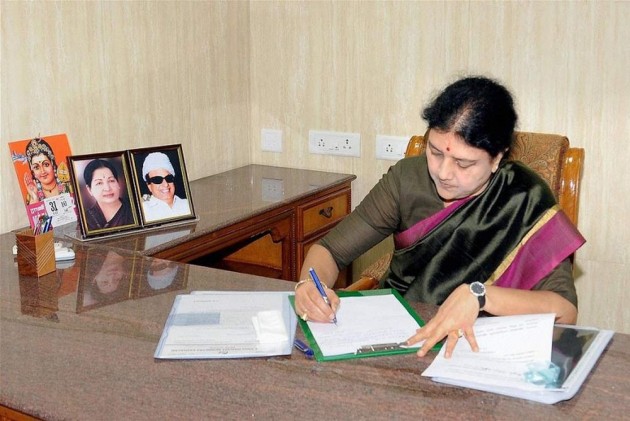 An NDTV report states that Sasikala will not be sworn in as Chief Minister today and that the governor is taking legal advice on whether she can be sworn in considering the disproportionate assets case against her. It adds that Governor Rao has kept the instance in mind when former TN CM late Jayalalithaa had to resign due to a corruption case against her in 2001.

Amid reports that Rao was seeking legal advice before administering the oath of office to Sasikala, he  arrived in Mumbai late last night. Reports say Rao had attended Union Minister Prakash Javadekar’s son’s wedding in Delhi where he is said to have consulted Home Minister Rajnath Singh and Attorney General Mukul Rohatgi on the matter.

There was, however, no official word on what the Governor was exactly planning to do after the Supreme Court indicated on Monday that  it could deliver a judgement soon in a disproportionate assets case against Sasikala. Jayalalithaa is also an accused in the case. A conviction after being sworn in would result in Sasikala having to step down as chief minister.

A PIL was also filed in the Supreme Court today seeking to restrain Sasikala from being sworn-in as chief minister as in the event of her having to resign, in case she was convicted in the DA case, could lead to law and order problem in the state.

Rao had travelled from Coimbatore to the national capital last night after Sasikala was elected leader of the AIADMK legislature party, clearing the decks for her elevation as the chief minister. Chief Minister O Panneerselvam today tendered his resignation and those of his ministers to Governor Rao which were accepted.

According to a Chennai report, the Madras University Auditorium, which had earlier hosted the swearing-in of Jayalalithaa, was being reportedly spruced up for the occasion.

A senior AIADMK source said all arrangements were in place for the swearing-in.