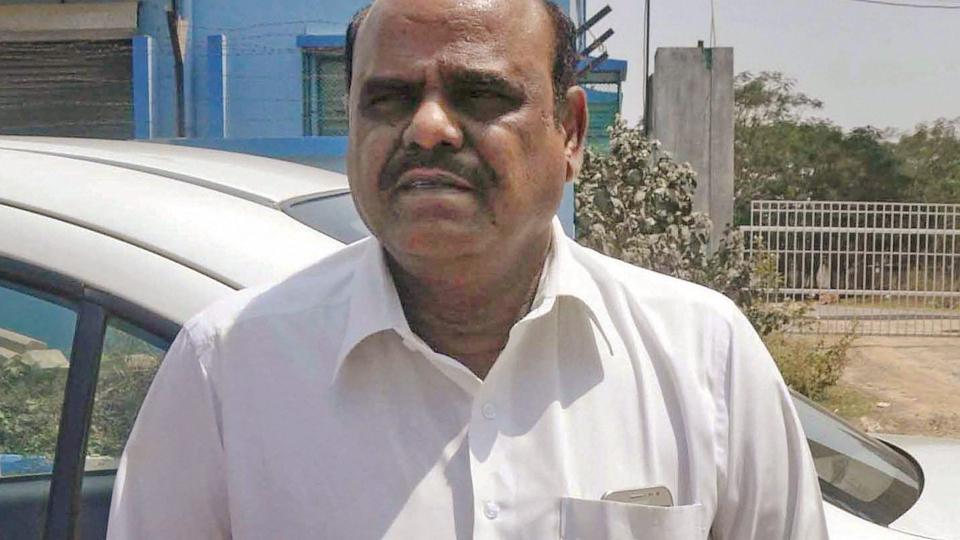 In an unprecedented order, the Supreme Court today held controversial Calcutta High Court judge Justice C S Karnan guilty of contempt of court and sentenced him to jail for six months, ordering that he be taken into custody forthwith.

A seven-judge constitution bench, headed by Chief Justice J S Khehar, said "We are of the unanimous view that Justice C S Karnan committed contempt of court, contempt of judiciary and the process."

This is the first time that a sitting high court judge is being sent to jail by the Supreme Court on charges of contempt.

"The sentence shall be executed and he be taken into custody forthwith," the bench said.

The bench also banned the media, both print and electronic, from publishing the contents of further orders passed by Justice Karnan.

At the outset of the hearing, senior advocate Rakesh Dwivedi, appearing for West Bengal, said in compliance of apex court's earlier direction, a medical board along with the DGP and police personnel had gone to Justice Karnan's place but he gave a letter saying he was fit and of a sound mind.

Dwivedi read out the letter to the bench.

ASG Maninder Singh told the bench that Justice Karnan knows what he is doing and he needs to be punished for contempt of court as he has passed several orders against the judges of the apex court.

Senior advocate K K Venugopal, appearing for Registrar General of Madras High Court, said that if Justice Karnan is sent to jail, it would create a blemish of a sitting judge being sent to jail for contempt.

The bench then said there was no question about the visit medical board having visited him (Karnan).

"We are assured that he is fit and fine and the medical board does not contradict it," the bench said.

The ASG said that he has passed an order yesterday that he is not in contempt of court. "Some action should be taken against him so that an appropriate message is sent," he said.

The bench said the contempt power does not recognise who is what, whether he is a judge and individual or a private person and that it is simple contempt.

"If we do not send him to jail, there will be a blemish that Supreme Court has condoned the contempt committed by a judge," the bench said.

It said Justice Karnan can be punished as he has himself declared that he was of sound mind and the medical board has not contradicted it.

The apex court had on May 1 directed medical check-up of Justice Karnan by doctors with police support, as the judge did not appear before it.

The judge had on May 4 declined to undergo a mental health checkup as ordered by the supreme court, telling a team of doctors he is "absolutely normal" and has a "stable mind".

The apex court had on March 10 issued a bailable warrant against Justice Karnan to ensure his presence before it in the contempt case. The warrant had come almost a month after the court had asked Justice Karnan to appear in person and explain why contempt proceedings not be initiated against him.

On March 31, Justice Karnan had appeared in the Supreme Court, a first in Indian judicial history, and had sought restoration of his powers as a condition for his re- appearance, but the plea was rejected.

He had also said he would not appear before it again even if he was arrested and put in jail.

Justice Karnan was transferred from the Madras HC to the Calcutta HC for his conduct. A recalcitrant Karnan had on February 15, 2016 stayed his transfer order. The apex court even asked the Chief Justice of the Madras High Court not to assign any judicial work to him.

The same day the apex court had suspended Justice Karnan's order. The Supreme Court also made it clear that all administrative and judicial orders passed by him after the issuance of the order of his transfer shall remain stayed.