With the British decision vis-a-vis Narendra Modi, yet another obstacle to his prime ministerial aspirations is removed... 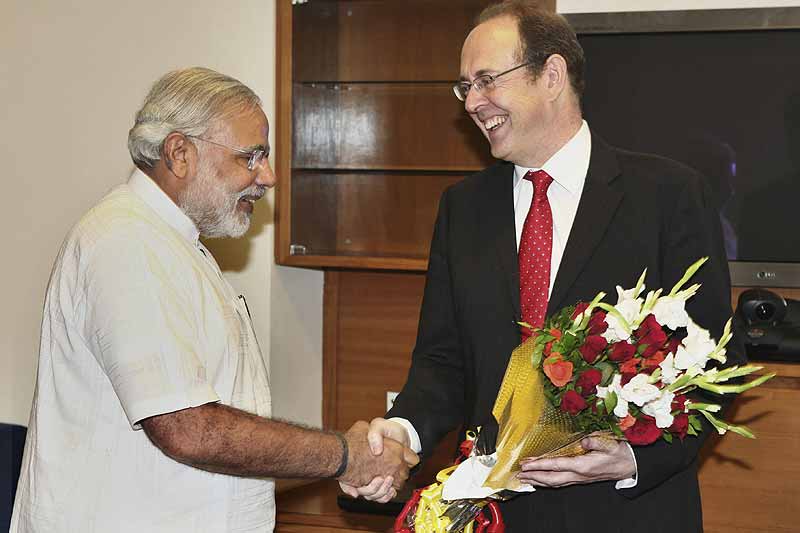 The misgivings entertained till now in the West regarding the advisability of doing business as usual with Mr Narendra Modi, the Chief Minister of Gujarat, are showing signs of subsiding.

That is the message that comes out loud and clear from the visit of Mr James Bevan, the British High Commissioner to India, to Gujarat on October 22, 2012. Till now, the UK was following in the footsteps of other European Union countries in avoiding any governmental, including diplomatic, interaction with the government of Gujarat in general and Mr Modi in particular. This policy of avoidance of interaction was a sequel to the widespread communal riots in Gujarat in 2002 and the deaths of three Muslims of British origin in the state during the riots. This policy of avoidance of governmental interactions did not, however, stand in the way of British investors—of Gujarati as well as non-Gujarati origin—investing in Gujarat.

The decision to end the policy of avoidance of governmental interactions was announced by Mr Hugo Swire, a minister in the British Foreign Office, some weeks ago. While announcing the decision, he said: “ This will allow us to discuss a wide range of issues of mutual interest in Gujarat. We want to secure justice for the families of the British nationals who were killed in 2002.” It was in pursuance of this announcement that Mr Bevan visited Gujarat.

Among those he reportedly met during his visit were Mr Modi himself, Ms Kamala Beniwal, the Governor of the state, and Mr Arjun Modhvadia, the President of the state Congress. Reading between the lines of the statements and observations of Mr Bevan, two significant points are evident.

First, the UK continues to attach importance to the question of human rights in Gujarat.

Second, it decided to resume interactions with Mr Modi and other members of the Gujarat government because it sees no reason to blame Mr Modi personally for the violations in 2002.

The British move is a clear indication that the British government no longer feels that alleged sins of commission and omission of Mr Modi contributed to the massacre of the Muslims in 2002, as alleged by his detractors.

Sections of the Muslim community of sub-continental origin in the UK have strongly protested against the British decision. It is significant that the British High Commissioner went ahead with his visit to Gujarat despite these protests. This shows that the British government took its decision after a careful consideration of its implications and there is little likelihood of its reversing the decision under pressure from its Muslim community.

Mr Bevan has also been quoted as saying that the British government took the decision on its own without prior consultation with the governments of other EU countries. There is an element of surprise that Mr Bevan undertook the visit during the current election campaign in Gujarat, but he did not seem to be worried that this could be politically misinterpreted in India.

The only other EU country which has officially commented on the British decision is Germany. Its officials have been quoted as saying that Germany would wait till the elections to the Gujarat Assembly are over before examining the matter.

It is likely that after the state elections, other EU countries may follow the British example. The ultimate attitude of the US is not yet clear.

If the British decision is followed by other EU countries, it will pave the way for the end of the diplomatic avoidance of Mr Modi followed by the EU countries since 2002. If the US also joins, it could lead to a collateral strengthening of the prime ministerial claims of Mr Modi.

While Mr Modi has a very good record as the Chief Minister, what stands in the way of his prime ministerial aspirations is his image as non-secular among political elements outside Gujarat and the diplomatic avoidance by the Western countries.

With the seeming beginning of the end of the policy of diplomatic avoidance, only the mental reservations still in India outside Gujarat about his credentials as a pan-Indian and all-community leader will stand in the way of his aspirations. But if the BJP, under his leadership, fights the next elections to the Lok Sabha unitedly and scores a significant victory, it may be difficult for other political formations in the NDA coalition to oppose the acceptance of Mr Modi as the post-2014 P.M.