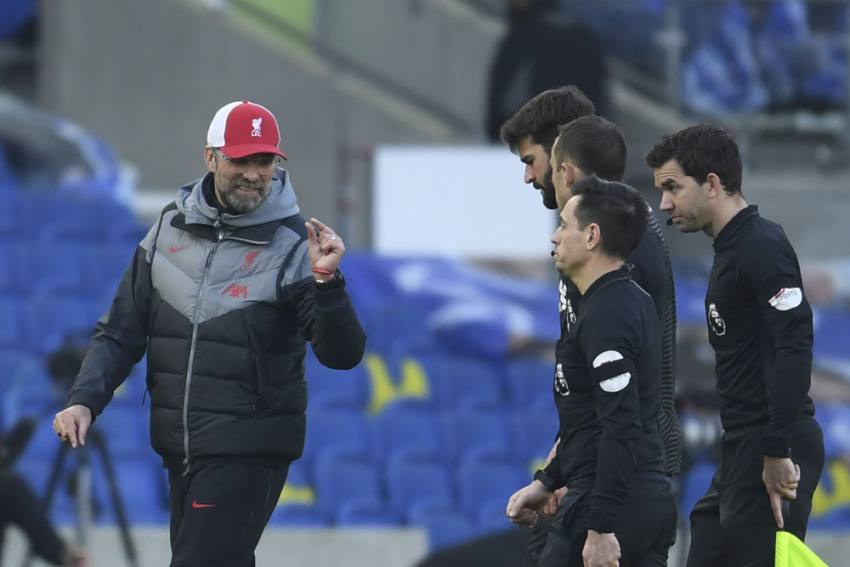 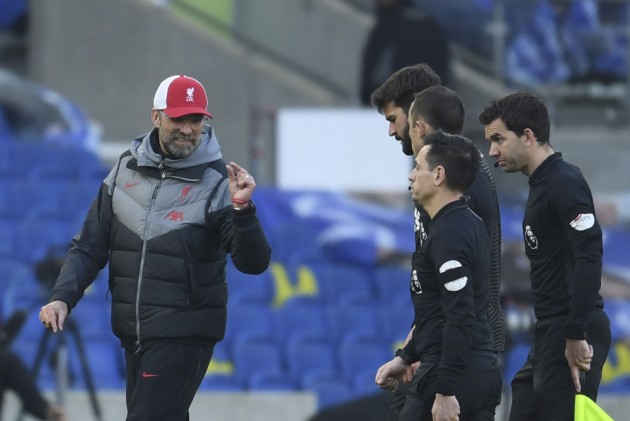 Pascal Gross scored a 93rd-minute penalty at the Amex Stadium after referee Stuart Attwell overturned his initial decision and pointed to the spot following intervention by VAR.

Andy Robertson clipped Danny Welbeck when attempting to clear the ball late on and the officials decided the contact was worthy of a spot-kick – Brighton's second of the match, with Neal Maupay becoming the first player to start a Premier League game, miss a penalty, and be subbed off before half-time since Dennis Bergkamp in April 1998.

The drama came at the end of a game in which Mohamed Salah and Sadio Mane had goals disallowed for offside, but Klopp, whose side have dropped six points from winning positions this season, accepted the decisions.

"The two offsides I didn't see back but our analysts said yes [they were off]. They were really close," he said.

"With Mo I think it was a foot but we are used to armpits and club badges so, if it's a toe, then it's obviously offside and the other one with Sadio was clear I heard.

"The penalty, that's how it is. I think the decisions were right, yes"

When it was put to him by interviewer Kelly that skipper Jordan Henderson said some Brighton players had agreed it should probably not have been a penalty, Klopp reacted angrily.

"Look, you try to create again, at my cost, again, a headline, you do," he said. "Because t hat's how it is, if I say now it was not, but the ref whistled it.

"Don't look like this, you try, always, all the time, but I say today it was a penalty. But you are not happy with that answer, so what do you want to hear? Give the answers to yourself...

"I said it was a penalty because the ref whistled it after watching it."

The Seagulls snatch a late point but the champions still return to the top of the #PL table #BHALIV pic.twitter.com/wqEsHNdO9W

Klopp then took a swipe at the broadcaster's decision to select Liverpool for the early kick-off, three days on from the Reds' Champions League meeting against Atalanta.

Kelly explained it was a Premier League decision to televise matches at 12:30 GMT, to which the German coach replied: "I say it a lot – you picked the 12:30pm kick-off.

"You did. Not you personally. I'm not having a go at the broadcaster, I'm just saying how it is. It is really dangerous for the players.

"When we had a talk between the managers a week ago, most wanted five subs. Since then nothing happened."

Klopp then turned focus to Sheffield United boss Chris Wilder, who this week labelled Klopp "selfish" for his stance on the planned return of supporters to certain Premier League grounds.

"Chris Wilder or whoever says constantly than I am selfish... I think all the things he said show that he's selfish," Klopp said.

"For example, if we have five subs today, I take off Robbo (Robertson) to protect him and bring on Kostas Tsimikas.

"I only go for the broadcasters when we have to play Wednesday and 12:30pm on a Saturday. Only seven managers have a similar problem and they all agree.

"In this season it's a bigger problem, and it's not okay. We've had this slot three times. Look who else had it three times: nobody."

After Diogo Jota's ninth Liverpool goal had put the Reds ahead, Brighton equalised through one of only two shots on target they mustered, as the Reds' winless away run in the top flight stretched to five games – their longest since March 2017.

6 - Liverpool have dropped more points from winning positions this season (6) than they did in the whole of last season (5). Drama. #BHALIV pic.twitter.com/69oIaaKcTc

Liverpool lost James Milner to a hamstring injury in the second half but a bigger talking point was Salah's reaction to being subbed off with a little over 25 minutes to go.

Salah threw his arms up in unhappiness when his number went up on the board and appeared to blank Klopp as he made his way to the bench.

"If Mo is smiling when leaving the pitch then something is wrong," Klopp said. "He was out for 10 days with coronavirus. We have to be careful – he doesn't like it. But that's all it is."