Home  »  Website  »  Sports  » Interviews  »  EXCLUSIVE | World Championship Title Will Particularly Motivate Me; Will Give A Lot Of Confidence: PV Sindhu

EXCLUSIVE | World Championship Title Will Particularly Motivate Me; Will Give A Lot Of Confidence: PV Sindhu

Indian shuttler PV Sindhu recently defeated Nozomi Okuhara in the BWF World Championships final, winning the gold medal after having reached the final in 2017 and 2018. 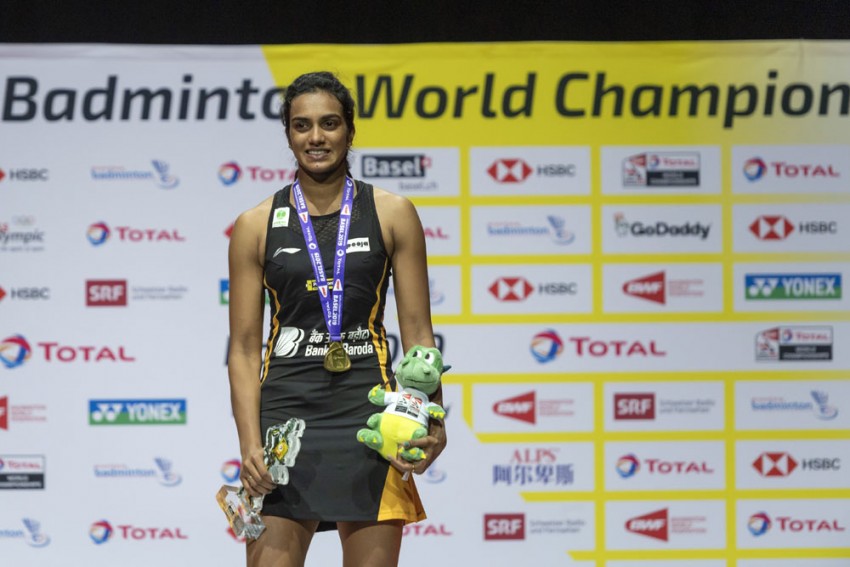 PV Sindhu will be hoping to continue her fine form in the upcoming China Open and Korea Open.
PTI
Qaiser Mohammad Ali September 03, 2019 00:00 IST EXCLUSIVE | World Championship Title Will Particularly Motivate Me; Will Give A Lot Of Confidence: PV Sindhu 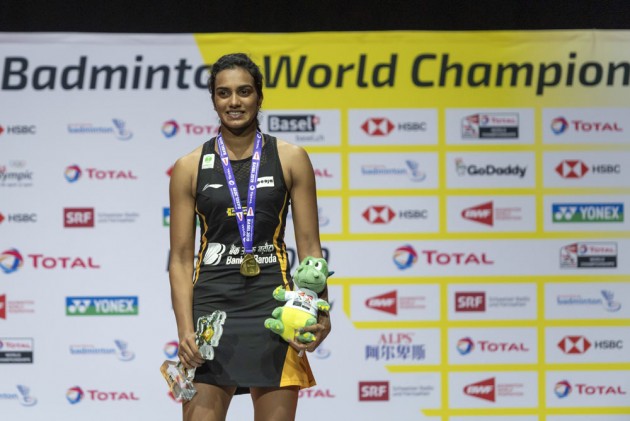 Ace shuttler Pusarla Venkata Sindhu, 24, made Indian badminton history on August 25 as she became the first from the country – man or woman – to clinch the coveted badminton World Championships crown. The Master of Business Administration degree holder defeated Nozomi Okuhara of Japan – 21-7, 21-7 – in a completely lopsided final in just 38 minutes at St. Jakobshalle, near Basel, Switzerland. Having bagged the World Championships bronze in 2013 and 2014, and consecutive silver in 2017 and 2018, she must have been under pressure to break the jinx, and she broke the barrier with a superlative performance. This year has been a good one for Sindhu as she had earlier completed her MBA from St. Ann’s College, Hyderabad. Now, she is looking forward to putting up a similar performance at the China Open (Sept 17-22) and the Korea Open (Sept 24-29) – before the Olympic Games in Tokyo next year.

Your third consecutive World Championships final would have been a bigger mental challenge for you as the pressure of having lost two straight finals would have been at the back of your mind. How did you overcome these two ‘opponents’ — Nozomi Okuhara of Japan and the pressure of avoiding a third consecutive defeat in the final – at the same time?

Well, I never felt that [pressure] in my mind when I was playing the final. This time, I thought, I will give my best and play my [natural] game. Winning and losing is secondary. And I played the same way and won. I am very happy.

What all did you do to overcome the situation you were in, which is playing a third consecutive World Championship final? You had stopped using your mobile phone.

Yes, I was not using the mobile. But I was obviously using social media, to reply to a lot of people who were congratulating me. You obviously have to make sacrifices. I really prepared for this tournament and I really worked hard and that showed. I am very happy about it because after two bronze and two silver, I would say it was a much-awaited win. And at the same time, Kim (Ji Hyun, a renowned Korean coach attached with the Indian team) and Gopi (Chand) sir had a few things in their minds that we worked out and everything turned on well.

What were the precautions and steps that you took to stay focused on the championships?

Well, each match was important for me and every point too. Obviously, I did a lot of preparations, like practicing and changing a few things in my game.

How did you prepare especially after you came to know who your opponent (Nozomi Okuhara) was in the final?

We know each other’s game, so it’s not like we didn’t know. There was no particular strategy at that point in time. It was just that I had to be just focussed.

I had a good sleep, and I was keen to give my best. I didn’t have any pressure. I mentioned the word ‘nervous’ because I was leading Nozomi so much and I was making a few silly mistakes, giving away easy points. I shouldn’t have made those silly mistakes and should have played my strokes.

You demolished Okuhara in just 38 minutes, without giving her a semblance of a chance. Was it part of your strategy to be aggressive from the beginning and not let her settle down at all?

Yes, every point was important, so I played the same way and I was dominating from the start. I thought, obviously, it wouldn’t be a long match, but then dominating every point and playing aggressively really worked out well. I think I am an aggressive player.

You received huge support from the 9,000-odd fans at St. Jakobshalle, Basel. Was that of any help in the final? And, were you surprised at the support you received?

Well, it was good that they supported me. It was a kind of encouragement and support from them. I took it in a very positive way and it was really good as well. There were Indians in the crowd and they were actually supporting from the first day, and in the final, it was probably more.

Coincidentally, the day of the final was also your mother’s birthday. Did that coincidence play as an additional motivating factor for you in the title match?

Well, it was just that it was her birthday and I wanted to give her a present. And obviously she felt very happy about it. I mean it was nothing like an additional motivating factor for me. First thing, I never thought it would come on her birthday and I was just focussing on my match. I just wanted to give her a present by winning the match and I did it.

Something very unusual happened before the championships when the women’s draw was re-done after someone was by mistake added to the draw. Did that make any difference to you?

Actually, I think, they shouldn’t have changed the draw. They said that somebody had to go out and it got changed. Anyway, we have to play with everybody, so it doesn’t make any difference. At the end of the day, when you come to the finals you have to beat everyone to get there.

If the draw wasn’t changed, you could have met Nozomi Okuhara in the semi-finals, and not in the final (and Chen Yu Fei of China or Ratchanok Intanon of Thailand in the final).

You now have a 9-7 record against Okuhara. In July, you had beaten her in the Indonesia Open quarterfinals. Do you feel that victory gave you a psychological advantage against her in the World Championships final?

Every time we play, it is a new game, I must say. I don’t think about other matches and just play each match like a fresh game. A little bit (of advantage was there), yes, but as I really didn’t think about that match and, as I said, every match is completely different from the other.

After the China Open, you had said that post your 2016 Olympics bronze everyone asked you ‘what’s next?’ I now ask ‘what’s next’ for you as you have reached the badminton peak. Reaching a peak is easier than staying there. How do you plan to remain at the top?

Well, it’s tough. I need to work hard and the future tournaments will be a lot tougher. My next goal is Tokyo, but before that it is step-by-step for me. I hope I do well in the upcoming tournaments since there is also Olympic qualification (to be achieved).

How much importance do you give to rankings and do you keep an eye on the rankings while competing?

I think rankings don’t matter much. If you play well and give your best, the rankings will automatically improve.

Please explain the role played by Gopichand in the overall development of your game so far, and particularly his inputs for the 2019 World Championships?

I am very thankful to him because since an under-10 player I have been training under him and improving step by step and here I am today. So, a coach’s role is definitely important.

How do you assess the part played by renowned veteran Korean coach Kim Ji Hyun, who is with the Indian team for the last few months? How much has she helped you in improving your game?

I have been training under her for a couple of months. She had made some changes (to my game) and we have worked out under the guidance of Gopi sir.

Since she is a woman, you may be more comfortable talking to her as doubles up as a coach.

Well, she supports me; she motivates me. It’s good. She has been there for a couple of months now and I am really very happy about it.

Kim Ji Hyun, in an interview, just before the World Championships started, said that Sindhu “needs to develop more skills”, “...especially net skills and deception”. She also said that both she and you were working on these aspects, “step by step”. Do you agree that since the game of all top players is so much exposed, a top player has to continuously change his/her
style in today’s cut-throat competition?

Your first World Superseries Premier tournament title (China Open in Fuzhou) in November 2016 was another huge achievement of your career, besides the 2016 Olympics silver. How important was that in your career?

It was the first time I had won (a Superseries Premier) and it gave me a lot of confidence and boost. Since then I have been improving and winning a lot more matches with that same confidence.

The big question is obviously the 2020 Tokyo Olympics next year. What are your plans for the Olympics?

Have you finalised your tournament schedule leading up to the Olympics?

We need to discuss it between the coaches and me, and plan accordingly. Every tournament is very, very important for me.

Having won the silver in Rio, and the gold in Basel, do you feel more motivated to put up an improved performance at the Olympics with a top-of-the-podium finish?

Definitely, yes, these medals will motivate me. Of course, the World Championship gold will particularly motivate me and will give a lot of confidence and I hope I do well in the upcoming matches.

What are the lessons that you have learned from the 2019 World Championships?

I have learned a lot of things and I am still learning. Learning is a process and you learn new things every day. So, I am not over with it. The World Championships may be over, but I will learn a lot of new things going forward.

How do you tackle on-court and off-court pressure? And do you feel you are now more comfortable in handling pressure than before?

Yeah, definitely. Pressure and responsibility are always high. It’s just that I need to give my best rather than thinking about others. You should play well and win – and it’s good for everyone.

How do you handle criticism? Do you get upset by criticism?

I don’t really take criticism to the heart. I just let it go.

Generally speaking, what are the sacrifices that you have made vis-a-vis food, education, social life, and family etc, to remain fighting fit and focussed on the game.

I have finished my MBA from St Anne’s College, Hyderabad, this year. Studies are also important. At the same time, yes, sacrifices, too. I thank my parents also and a lot of credit goes to them because they have sacrificed a lot of things. So far I am concerned, when you want to achieve some goals, you will have to make sacrifices and you shouldn’t think about it.

What all have you stopped eating to remain fit?

Of course, I avoid junk and oily food. Sometimes, it’s okay. Protein etc is very important. And I do eat rice as I have been eating it for a long time. But it all differs from person to person.

Ashes 2019, England Vs Australia: Usman Khawaja Will Bounce Back From Missing Out At Old Trafford, Says Tim Paine