India reached 203 for 6 against West Indies on a shaky Day 1 of the first Test at Sir Vivian Richards Stadium, with Shannon Gabriel and Kemar Roach running riot. 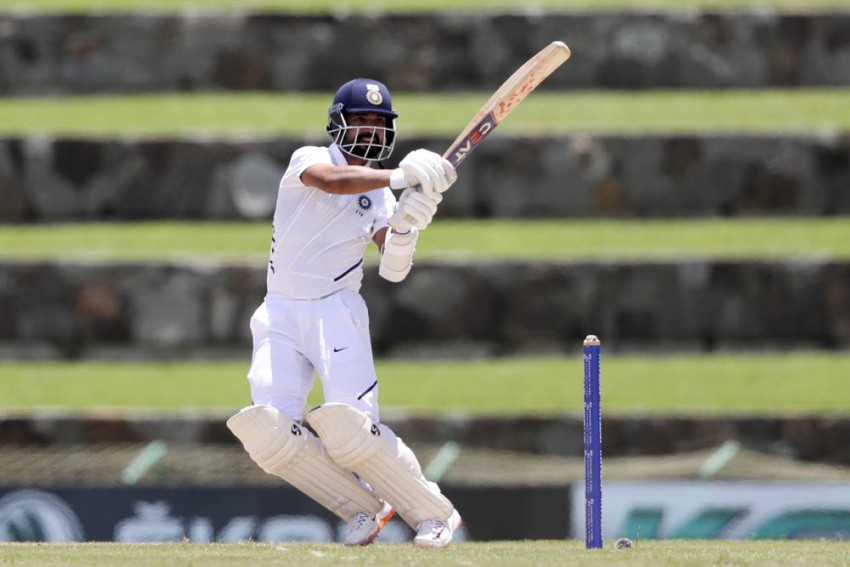 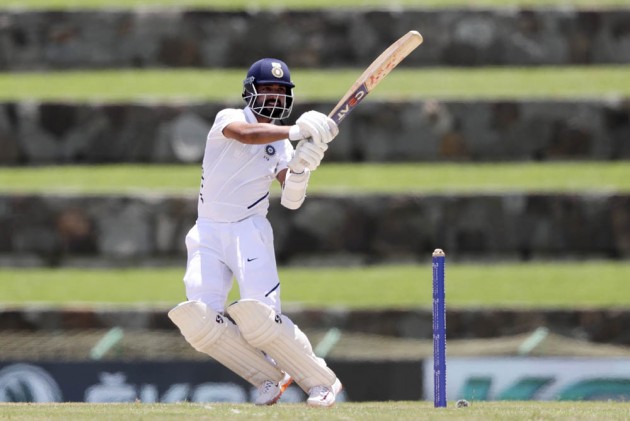 Ajinkya Rahane silenced his critics with a much-needed 81 on a pacer-friendly track as wobbly India reached 203 for 6 against the West Indies on a rain-hit opening day of the World Test Championship encounter.

Only 68.5 overs of play was possible on the day as inclement weather led to multiple interruptions but not before Rahane played one of the most defining knocks of his international career which seemed to be at crossroads due to consistent failures.

The 163-ball knock that was studded with 10 boundaries was the saving grace in an otherwise disappointing day for the Indian batsmen, who struggled against the seasoned new-ball pair of Kemar Roach (3/34 in 17 overs) and Shannon Gabriel (2/49 in 15 overs).

Roach with his movement off the pitch and Gabriel with his ability to extract disconcerting bounce reduced India to 25 for 3 within first eight overs with opener Mayank Agarwal (5), No 3 Cheteshwar Pujara (2) and team's best batsman Virat Kohli (9) back in the dressing room.

Rahane had a couple of useful partnerships -- 68 for fourth wicket with opener KL Rahul (44 off 97 balls) and 82 for fifth with Hanuma Vihari (32 off 56 balls) which put the innings somewhat back on track although they aren't still out of woods.

However all three players were guilty of throwing away their wickets after getting set. Especially, Rahane who was desperate to get his 10th Test hundred and first in more than two years.

It was extra bounce generated by Gabriel that brought about the Indian vice-captain's downfall as he dragged the ball back onto the stumps trying to play a square cut.

On a day when Rahane completed 10,000 runs in first-class cricket along with 18th half-century in Tests, he gave a good account of himself in the post-lunch session with some delectable drives and deft touch play, something he is familiar with.

However he looked all circumspect during the first session, having come in the eighth over itself. Till lunch, it was Rahul, who was doing the bulk of the scoring as he hung in at the other end scoring only 10 runs till lunch.

Once Rahul was smartly snapped down the leg-side by wicket-keeper Shai Hope off Roston Chase's bowling at the start of the post-lunch session, Rahane seemed to open up.

A square and straight drive off Shannon Gabriel and a cover drive of Kemar Roach signalled his intentions. Although he should consider himself lucky after a mistimed lofted shot off Chase was dropped by Miguel Cummins, who tried latching onto the catch running backeards from his mid-on position.

To add insult to his injury, Rahane got a double off Cummins to complete his half-century, which would be much of a relief for him.

The stylish right-hander, who loves to play on the up found it easy to play on the rise, riding the bounce. He also hit a lovely backfoot cover drive off Chase.

But as it has been through the day, just when it seemed as if there would be a big partnership with the pitch showing signs of getting easier, India lost Vihari o Roach, who bowled a fiery third spell with old Dukes.

In the morning session, it was Rahul, who held fort after skipper Kohli was done in by bounce fending a short delivery to gully and Cheteshwar Pujara defeated by movement off the pitch.

At 25 for 3, it could have been worse but a determined Rahul put his head down and left a lot of deliveries outside off-stump as Rahane also defended dourly at the other end, waiting for Roach and Gabriel's first spell to end.

It was only when back-up pacer Miguel Cummins came into operation that Rahul collected three of his four boundaries -- a cut and a couple of off-drives.