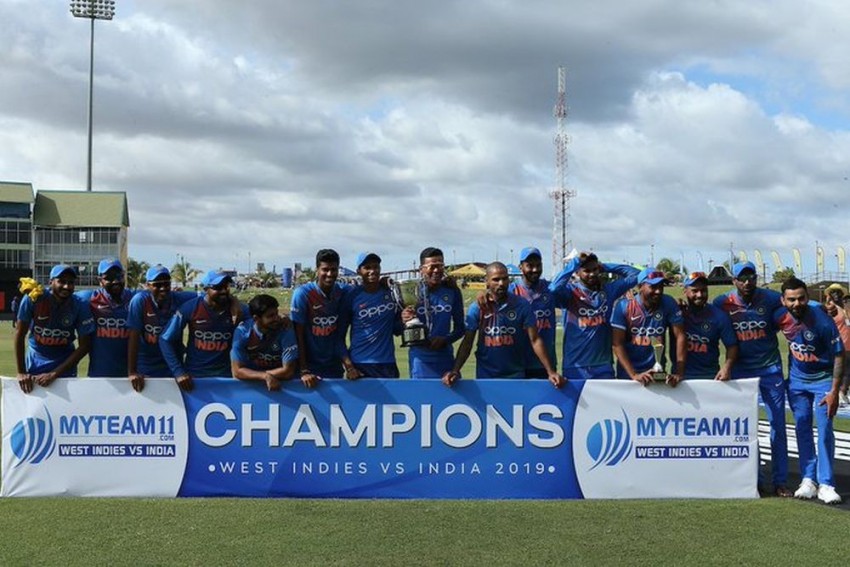 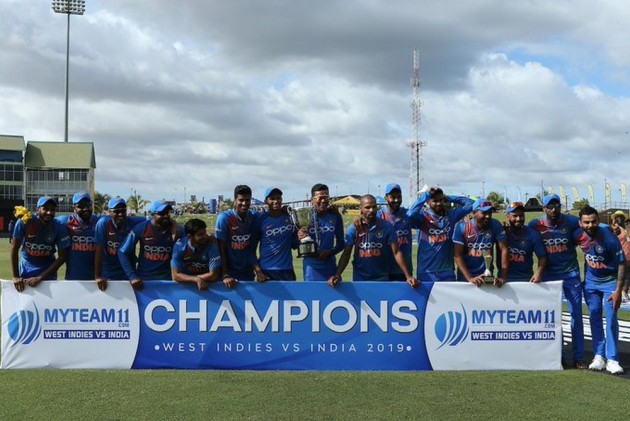 Chasing target of 147 on a slowish deck, skipper Kohli anchored the innings to perfection with 59 off 45 balls while Pant was brilliant during his unbeaten 65 off 42 balls. The target was achieved in 19.1 overs.

A lot of credit should also go to seamer Deepak Chahar, who bowled a magnificent opening spell and ended with fures of 3 for 4 in 3 overs which went a long way in restricting the West Indies to a manageable 146 for 6.

For the home team, it is their worst streak in T20 Internationals having lost six straight games.

Kohli's 21st half-century in T20 Internationals had six fours. The shot to remember would certainly be a whipping flick off Keemo Paul to widish long-on and a couple exquisite cover drives off Carlos Brathwaite.

Pant and Kohli then came together at 27 for 2 and slowly build the innings during a stand that yielded 106 runs in 12.5 overs.

Rishabh Pant finishes it off in style!

That's that from Guyana as #TeamIndia win the third T20I by 7 wickets to clinch the three match T20I series 3-0 ðÂÂÂÂÂÂÂÂÂÂÂÂÂÂÂðÂÂÂÂÂÂÂÂÂÂÂÂÂÂÂ pic.twitter.com/teSKCBtWBQ

But Kohli's bigger achievement was being able to instil a certain sense of game awareness in the youngster.

Having lost his wicket due to impetuosity in the previous games, the burly left-hander was discreet in his shot selection. In company of skipper Kohli, he was ready to play himself in on a track that was two paced and outfield which was slow.

However till their 50-run stand, the duo didn't go hammer and tongs at the Windies attack.

It was the 13th over when Pant finally gave the charge, getting his first six -- a flat hit over extra cover of Delhi Capitals teammate Paul's bowling. He repeated the same shot off the same bowler and got the same result.

Pant's second half-century in T20 Internationals came when he flicked Sheldon Cottrell for a boundary.

Once he had reached his half-century, he got on one knee and hit Oshane Thomas for his third six. He also hit four boundaries. The fourth and final six from Pant got India the winning runs.

Earlier, Deepak's incisive swing bowling was countered by Kieron Pollard' attacking half-century and Rovman Powell's cameo as West Indies put up a par score of 146 for 6 after being put into bat.

The Rajasthan seamer (3-1-4-3) made full use of his only opportunity in this tour taking three wickets his first two overs to leaving West Indies tottering at 14 for 3. He got the ball to swing both ways as he removed pinch-hitter Sunil Narine (2), Evin Lewis (10) and Shimron Hetmyer (1).

However Pollard counter-attacked with great gusto hitting as many as half a dozen sixes in his 45-ball-58 -- his first half-century for the West Indies in seven years.

Along with Nicholas Pooran (17), who played the second fiddle, Pollard added 67 for the fourth wicket as the Caribbeans looked to have recovered from their initial slump.

However Navdeep Saini came back for his second spell to first dismiss left-hander Pooran with an off-cutter (leg-cutter for the batsman) which was edged to Rishabh Pant behind the stumps.

Saini (2/34 in 4 overs), who had trapped Pollard leg-before with a dipping full-toss in the first game then bowled a slower delivery that pegged back the middle stump breaching through his bat and pad. West Indies were once again reeling at 105 for 5 before Deepak's younger cousin Rahul (1/27 in 3 overs) got his maiden wicket in the form rival skipper Carlos Brathwaite.

However Powell smashed his way to an unbeaten 32 off 20 balls to prop up the Windies total.

India captain Virat Kohli gave the final over to Saini instead of Deepak who had an over left. But the ploy didn't work too well as Powell hit him for two sixes that damaged his final figures.