Carlos Soler scored a hat-trick of penalties as Valencia ended a four-match winless run in LaLiga with a 4-1 rout of Real Madrid at the Mestalla. 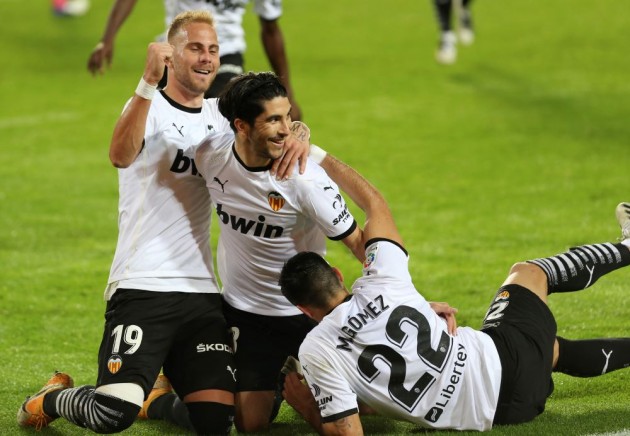 Carlos Soler scored a hat-trick of penalties as Valencia ended a four-match winless run in LaLiga with a 4-1 rout of Real Madrid at Mestalla. . (More Football News)

Soler's penalties – the first of which had to be re-taken due to an infringement by Yunus Musah – were added to by Raphael Varane's own goal as Valencia came from behind in a frantic encounter.

Karim Benzema, who has now scored more LaLiga goals than any other player since the resumption in June, opened the scoring with a thunderous strike – his fifth goal in his last four top-flight meetings with Valencia.

But Benzema's brilliance was not enough to inspire Zinedine Zidane's defensively suspect side, whose misery was compounded when Sergio Ramos handled to concede a third spot-kick, which Soler duly converted to condemn Madrid to a second LaLiga defeat of 2020-21.

Yet the hosts did so the hard way. After Soler saw his penalty saved and hit the post on the rebound, Musah slammed home, only for it to be disallowed after VAR spotted the 17-year-old had encroached into the area.

Referee Jesus Gil Manzano ordered the penalty to be re-taken and, although Thibaut Courtois again guessed the right way, Soler beat Madrid's goalkeeper at the second time of asking.

More drama followed as Valencia took the lead before half-time – Varane inadvertently looping Maxi Gomez's cross over Courtois, who failed to stop the ball from crossing the line.

However, it was only given after a long VAR check, which also deemed Denis Cheryshev not to have fouled Marco Asensio in the build-up.

Courtois made a fantastic save straight after the restart, tipping Lee Kang-In's strike onto the upright, but he was soon picking the ball out of his net again.

Marcelo scythed down Gomez, and Soler stepped up to convert into the bottom-right corner.

A remarkable hat-trick, and a brilliant Valencia victory, was rounded off in the 63rd minute – Soler picking out the same corner after Ramos had hit the ball away from Musah.

What does it mean? Gracia ends Madrid hoodoo

At the seventh attempt, Valencia coach Javi Gracia has managed his first LaLiga win over Madrid, and the triumph takes Valencia up to ninth, level on 11 points with Barcelona.

They are five behind Madrid, who sit fourth, four points off pacesetters Real Sociedad heading into the international break. Zidane also lost Benzema to what appeared to be a groin problem late on.

Soler's first attempt from 12 yards was poor, but the following three were all dispatched with supreme confidence. In scoring a hat-trick of spot-kicks, the 23-year-old became the first player to score three penalties in a single LaLiga match in the 21st century, and he has been directly involved in five goals in his last three meetings with Madrid at Mestalla.

3 - @valenciacf_en's Carlos Soler is the first player to score three penalty goals in the same @LaLigaEN game in the 21st century. Executioner. pic.twitter.com/qEgXFxCcpi

While Madrid's entire defence must shoulder the blame, one man in particular stands out. Varane's attempted clearance from Gomez's cross, which resulted in Valencia's second goal, was a dreadful one, and the France international has now scored two own goals in his last five games for Madrid in all competitions, as many as he had in his previous 324 matches.

- Valencia have scored four goals in a LaLiga game against Real Madrid for the first time since October 1995 (4-3 at Mestalla).
- The last time Madrid conceded four or more goals in a single LaLiga game was in October 2018 against Barcelona at Camp Nou (5-1), Julen Lopetegui's final match in charge.
- Benzema's goal was just his second from outside the box in an away LaLiga game. The first one was in November 2013 against Almeria.
- Soler's hat-trick was the first by a Valencia player in LaLiga since Simone Zaza in September 2017 against Malaga.
- Madrid have conceded four goals in a single LaLiga game for the first time under Zidane.

Madrid travel to Villarreal in their first fixture back after the international break, while Valencia take on Deportivo Alaves a day later.