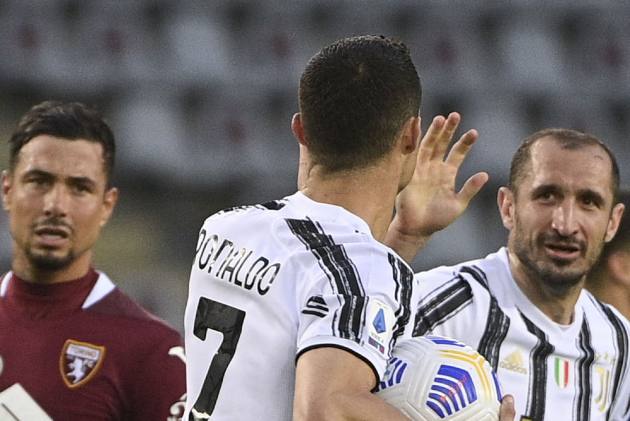 Federico Chiesa's 13th goal of the season put the champions in front, but Sanabria equalised before the break and struck again just 15 seconds into the second half at Olimpico Grande Torino.

Ronaldo denied Torino when he levelled 11 minutes from time with a goal that was initially ruled out, but a VAR checked showed he was onside.

Rodrigo Bentancur struck the post as fourth-placed Juve slipped up again following their shock loss to Benevento and they will be 12 points adrift of leaders Inter if Antonio Conte's side beat Bologna later on Saturday.

Salvatore Sirigu spread himself to keep out Alvaro Morata's scuffed shot before Chiesa fired over the crossbar in a strong start from Juve.

Torino thought they should have had a penalty for Matthijs de Ligt's challenge on Andrea Belotti and they were behind when Chiesa struck in the 13th minute.

The Italy winger played a one-two with Morata and fired home with his left foot after bursting into the penalty area at full tilt.

Torino responded well to going behind and were deservedly level after 27 minutes, when Rolando Mandragora's rasping long-range drive was saved by Wojciech Szczesny but Sanabria reacted first to nod home the loose ball.

Sanabria was celebrating again when he put Juve in front in the first minute of the second half, with Szczesny at fault as he was beaten at his near post by a left-foot strike from the Paraguay forward after Dejan Kulusevski gave the ball away with a sloppy pass.

Sirigu produced a fine fingertip save to keep out Ronaldo's towering header before the Portugal forward failed to hit the target when he got on the end of an inviting cross from Danilo.

Ronaldo somehow failed to finish from close range when Juan Cuadrado fired across the face of the goal as Torino appeared poised to hang on for a precious win.

But Ronaldo finally nodded in when a Giorgio Chiellini volley came into his path, racing back to the centre circle with the ball after VAR ruled he was just onside, and Bentancur almost put Juve in front with a shot that deflected against the woodwork in the 84th minute.

Sanabria came close to a hat-trick in the closing stages with a header that was saved by Szczesny and the Juve goalkeeper palmed away Daniele Baselli’s free-kick in a frantic finale.

What does it mean? Ronaldo equaliser only papers over the cracks

A 10th consecutive Scudetto already looked to be out of the Bianconeri's reach and they surely have too much ground to make up now.

Ronaldo's 31st goal in all competitions for Juve this season spared them a first defeat to Torino since 2015, but they paid the price for conceding a poor goal right at the start of the second half.

It has been another week to forget for Pirlo, who left Arthur, Paulo Dybala and Weston McKennie out of the squad for breaching coronavirus protocols, having lost Leonardo Bonucci and Merih Demiral after they tested positive for COVID-19.

Striker Sanabria joined Torino from Real Betis in the January transfer window and he has been a shrewd signing, scoring four goals in five Serie A games.

He only failed to find the net with one of his three shots and contested 17 duels and eight aerial duels, both game-highs, giving the Juve defence a torrid time. His brace leads Torino two points ahead of third-bottom Cagliari, who have played a game more.

Kulusevski did not make the sort of impact Pirlo would have been looking for going forward and his lapse early in the second half was costly.

The Sweden international was far too casual as he attempted a pass on the touchline and Sanabria punished him, although Szczesny should have dealt with his shot from a tight angle.

Kulusevski did not have a shot in a poor outing overall.

Juve face a crunch clash at home to Napoli on Wednesday, while Torino travel to Udinese next Saturday.