The two-time world champion ran 45.94 seconds to win a final where six of the first seven finishers set either national or area records 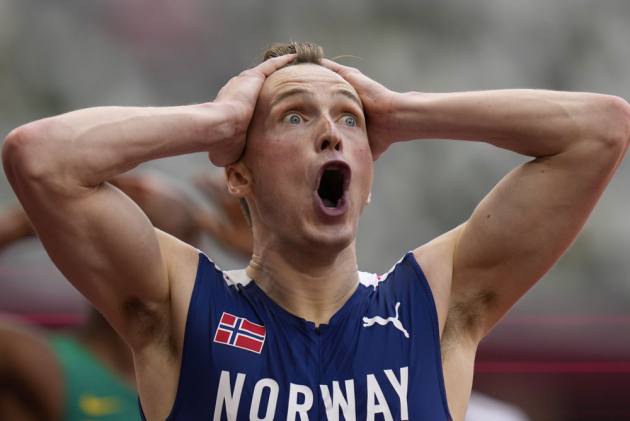 Karsten Warholm of Norway has beat his own world record to win the 400-meter hurdles gold medal on Tuesday at the Tokyo Olympics.

The two-time world champion ran 45.94 seconds to win a final where six of the first seven finishers set either national or area records.

It's the second time in just over a month that Warholm has lowered the record. He set the previous mark of 46.70 at Oslo on July 1.

Rai Benjamin of the United States took silver in 46.17 and Alison dos Santos of Brazil got bronze.

Earlier on Tuesday, Malaika Mihambo of Germany took the top spot in the women's long jump with a 7-meter leap on her final attempt and edged U.S. veteran Brittney Reese for the Olympic gold medal.

Mihambo won the world championship title in 2019 and finished just off the podium in fourth place at the 2016 Olympics.

The 34-year-old Reese now has back-to-back Olympic silver medals at the Tokyo Games and from Rio de Janeiro after winning the title at London in 2012.

The four-time world champion had the chance to win with the final jump of the competition but couldn't improve on her best mark of 6.97 meters.

Ese Brume of Nigeria, who led after the first round and was in top spot again after the fourth, also finished on 6.97-meters and took bronze on a countback.