Tokyo Olympics: Demoralised India Look To Bounce Back Against Spain In Men's Hockey

After winning 3-2 vs New Zealand, Indians were thumped 1-7 by world no 1 Australia in their second game. 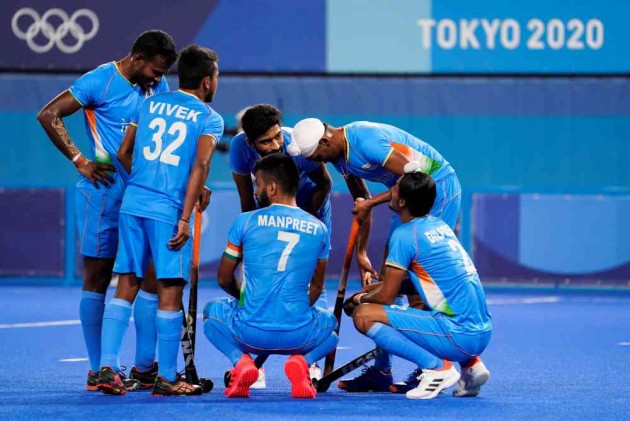 Thoroughly outplayed by Australia, the Indian men's hockey team would be desperate to rebuild a shattered morale when it takes on a lower-ranked Spain in its third Pool A match of the Olympics in Tokyo on Tuesday. Tokyo Olympics | Full Schedule | Sports News

After a fighting 3-2 win over New Zealand in their campaign opener, the Indians were completely steam-rolled 1-7 by world no.1 Australia in their second game.

The debacle exposed every possible chink in India's armour.

The mighty Kookaburras simply toyed with the Indian defence after the first quarter and scored goals at will to comfortably secure their second consecutive win in the competition.

It was also India's biggest loss since Australian Graham Reid took charge of the team as coach in April 2019.

The fragile Indian defence was put under relentless pressure by the Kookaburras from the onset and in doing so, they succeeded in creating spaces in the mid-field which resulted in as many as seven goals -- four in the first half and three in second.

After a hard-fought win against New Zealand, the Indians, ranked fourth in the world, looked completely listless against Australia.

But having faced multiple adversities in the run up to the Games, the Indians very well know how to bounce back and that is what chief coach Graham Reid would be banking on going into the tie against world no. 9 Spain.

Going by the points table, India are currently placed fourth just below New Zealand on goal difference. The pool is being headed by Australia with two wins out of as may matches, followed by reigning reigning Olympic champions Argentina with four points.

Spain and hosts Japan are yet to register a win in the two matches they have played.

Top four teams from a pool of six each will qualify for the quarterfinals.

The Indians looked nowhere close to their best against Australia on Sunday as they failed to make even one of the six penalty corners count in the match despite having three world-class drag-flickers in Harmanpreet Singh, Rupinder Pal Singh and Amit Rohidas in their ranks.

The forward-line led by Mandeep Singh, Shamsher Singh, Lalit Upadhayay and Dilpreet too looked off colour.

The mid-field,a key area in international hockey, was nowhere to be seen with only skipper Manpreet showing spark in patches.

The ever-fragile back-line was completely absent as the likes of Rupinder, Harmanpreet, veteran Birender Lakra and Rohidas were completely outplayed in numbers by the attacking Australians.

Experienced custodian PR Sreejesh wore the look of a disappointed man as he failed to stop the Australian surge, allowing as many as seven goals past him into the net.

But having said that it will be a completely different day on Tuesday for the Indians and chief coach Reid, who coached Australia in the Rio Olympics, said the Indians will have to utilise the chances that come their way.

"We simply have to put the ball in the net to put some scoreboard pressure on them and that means making use of the chances that come your way," he had said after Sunday's loss.

Drawing references from the Euro 2017 championship in Amstelveen where The Netherlands lost 0-5 to Belgium but eventually beat them in the final, Reid said: "We are very wary about our morale being affected. We will make sure it won't happen."

"We will look at what can be fixed and focus on the next training session and the next game. That's the mindset with which we wish to go ahead. Most importantly, we've got to put the ball in the goal."

India captain Manpreet said they erred in man-to-man marking against Australia, an area which they need to address going into the tournament.

"...this is a lesson for us. We are disappointed but we must now focus on bouncing back. There are, after all, three matches to go in the pool stage," he said.

"We missed chances at the start and that makes a difference when it happens against top sides."

Spain, on the other hand, would look to register their first win in the tournament, having drawn 1-1 against Argentina before losing 3-4 to New Zealand on Sunday.