Australia beat defending champions Argentina 5-2 in a Pool A match of the Tokyo Olympics, men's hockey competition on Tuesday 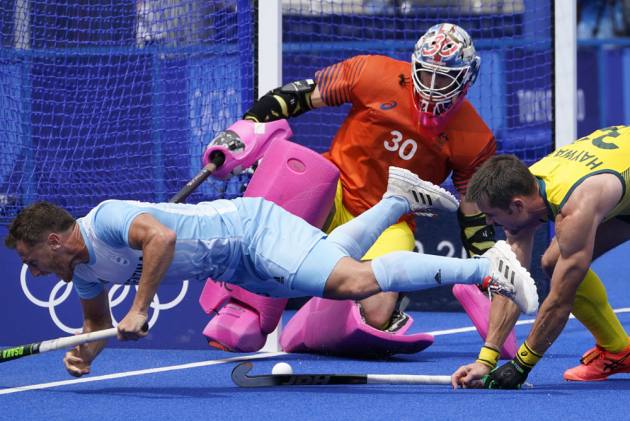 Australia continued their fine Tokyo form with another thumping win, defeating reigning Olympic champions Argentina 5-2 to take their Pool A points tally to a maximum nine from three matches. The Kookaburras are now certain of a place in the quarter-finals, and have scored a remarkable 17 goals.

Los Leones made a strong start, snatching a first quarter lead thanks to Jose Tolini’s fine penalty corner drag-flick. However, Australia soon found their rhythm, with a double for Blake Govers – his fourth and fifth of the competition – complementing strikes from Tom Wickham and Lachlan Sharp as the world number ones opened up a 4-1 half time lead. Jeremy Hayward rattled home a fifth with a third quarter penalty corner, with Argentina’s Maico Casella netting a late consolation for the Rio 2016 gold medallists.

Commenting on being at the top of Pool A with a very healthy goal difference, Kookaburras’ attacker Govers said: "We've still got two games to go (in the pool stage) so we've got a lot of improvement to do and a lot to work on, so that's pleasing for us."

Argentina goalkeeper Juan Vivaldi said: "In the general balance we played two quarters really well but in the second quarter we made a lot of mistakes. We missed so quickly and so fast the ball and Australia created a lot of chances to score a lot of goals and of course the difference was too great to recover from."

On Wednesday 28 July, Australia take on Oceania rivals New Zealand, while Argentina – who have four points - aim to keep their quarter-final ambitions on track when they face India on Thursday.