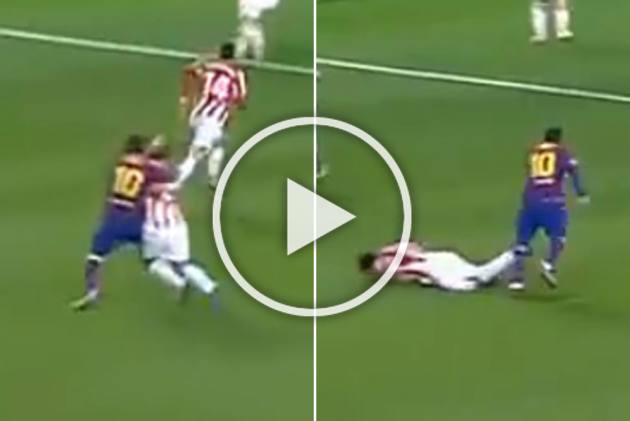 Lionel Messi's Barcelona career has had just about everything - but until early Monday morning the Argentine superstar had not been red-carded for the Camp Nou giants. (More Football News)

That changed when Messi was sent off for the first time in his club career after dramatically losing his cool late on in the 3-2 Supercopa de Espana final loss to Athletic Bilbao.

Messi, who recovered from a minor injury to take a place in Barca's starting line-up, saw red in what was his 753rd appearance for the club.

With 119 minutes of the match played, Messi swung at Asier Villalibre in an off-the-ball incident that was spotted by VAR and referee Jesus Gil Manzano reached into his back pocket.

The 33-year-old is now facing a possible extended ban that will carry over into LaLiga, with the disciplinary committee of the Spanish FA (RFEF) to have the final say on the length of the suspension.

It was the third red card of Messi's 17-year career overall, having also previously been dismissed twice for Argentina.

1 - After 753 appearances in all competitions, Lionel Messi has been sent off in a game for Barcelona for the first time. Red.

He was given his marching orders following a clash with Gary Medel in a Copa America third-place play-off in July 2019 and was famously sent off on his international debut against Hungary in 2005.

Messi failed to find the target from any of his three attempts in the loss to Athletic, who twice came from behind to win the competition for just a third time.

Antoine Griezmann scored twice, either side of Oscar De Marcos' equaliser, but Villalibre levelled up in the 90th minute and Inaki Williams scored a sublime winner three minutes into extra time.

Reflecting on the defeat, Barca boss Ronald Koeman - denied a first piece of silverware since succeeding Quique Setien at Camp Nou in August - said: "It was a difficult game.

"We were really close to the victory. It is always difficult to concede just before half-time, and then again at the end. It's really difficult to handle."