The left-arm orthodox spinner Praveen Jayawickrama triggered a sensational collapse as Bangladesh was bowled out for 251 after being 214 for three at one stage. 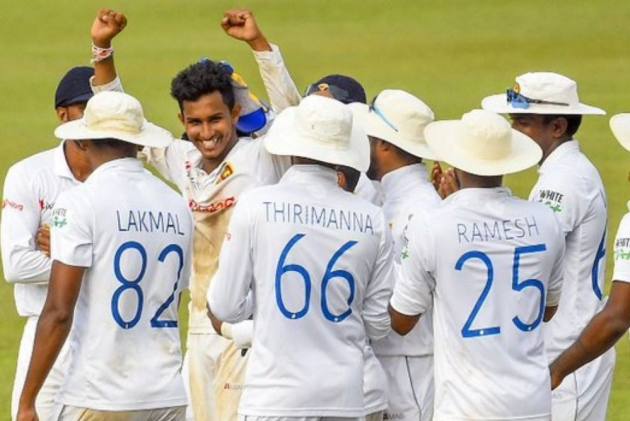 Sri Lanka is eyeing its first Test win in more than a year after claiming a first innings lead of 249 runs and reaching 17 for three at stumps to secure an overall lead of 259 runs in the second Test against Bangladesh in Pallekele on Saturday. Highlights | News

Praveen Jayawickrama became the fifth Sri Lankan to claim a five-wicket haul on debut as he finished with six for 92. The left-arm orthodox spinner triggered a sensational collapse as Bangladesh was bowled out for 251 after being 214 for three at one stage.

The wicket offered some assistance for Sri Lanka’s spinners and Jayawickrama cleverly mixed up his deliveries to trouble Bangladesh batsmen. Suranga Lakmal and Ramesh Mendis took two wickets apiece as Bangladesh was bowled out in 83 overs.

"The advice that I got from the seniors," the 22-year-old Jayawickrama said, "was to not to be rattled when the batsmen go after the bowling. They wanted me to bowl lots of dot balls and create the pressure and that worked today."

Tamim Iqbal was solid troubling the Sri Lankan seamers with an array of attacking shots. With the seamers unable to make the breakthrough, Dimuth Karunaratne turned to his spinners and both Jayawickrama and Mendis bowled accurately denying Tamim frequent boundaries.

Tamim, who had been dismissed for 90 in the first Test, yet again fell eight runs short of a well-deserved hundred when Jayawickrama foxed him with a ball that did not turn much.

Mominul Haque (49) and Mushfiqur Rahim (40) fought back but both batsmen were dismissed either side of tea as Sri Lanka wrestled back the initiative.

Mominul was dropped on one and 11, both off Jayawickrama, and his luck finally ran out one short of a half-century when he missed a full toss by Mendis that wrapped on the pads and he was plumb leg before wicket.

Jayawickrama claimed his fifth wicket when he trapped Mehidy Hasan leg before wicket for 16. He is the fifth Sri Lankan to take a five-wicket haul on debut after Kosala Kuruppuarachchi, Upul Chandana, Akila Dananjaya and Lasith Embuldeniya.

"Really happy with the effort to take six wickets on my debut, but a lot of work is left to be done over the next two days and I am looking forward for the challenge," Jayawickrama said.

Taskin Ahmed was Jayawickrama’s sixth victim and third given out leg before wicket. Bangladesh batsmen were not picking his straight one and he could have run through the tail but with the new ball taken after 80 overs Lakmal hammered the final nails on the coffin.

With two full days left and a massive first innings lead, Sri Lanka was expected to enforce the follow on, but opted to bat again.

Sri Lanka will secure the series by winning the second Test after the first one ended in a tame draw.

Russell Domingo, coach of the Bangladesh squad, was disappointed with the batting.

"They are putting in the hours in the field and the nets. Unfortunately, today we just came unstuck," he said.

"We made some poor decisions, I suppose, when we were batting. There's no excuse for the batting failure."

Domingo was confident his players will not give up.

"Sri Lanka are dominating at the moment, but if we can pick up early wickets tomorrow morning, cause a little bit of jitters in the change room, you never know," he said.