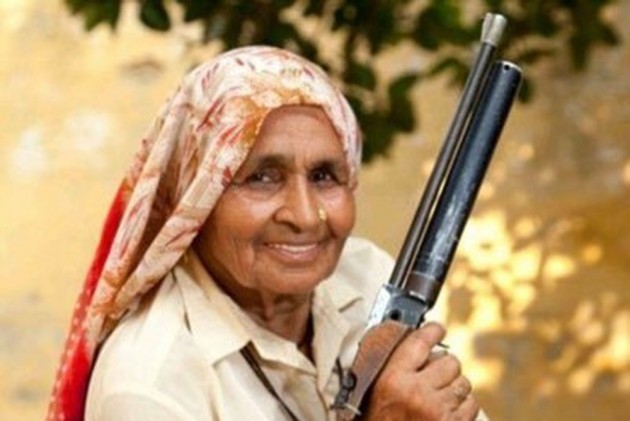 She had been admitted in the hospital after testing positive for COVID-19. She was having difficulty in breathing.

Confirming the news, Union minister for aviation Hardeep Singh Puri wrote on twitter, “An epitome of gender equality & champion of women’s rights Smt Chandro Tomar, known as ‘Shooter Dadi’ by her fans & admirers is no more. The courage with which she challenged patriarchy & took up shooting as a sport will inspire generations to come. Condolences to her family.”

Earlier, the twitter page of the 89-year-old legendary shooter, hailing from the Baghpat village in Uttar Pradesh, posted the development.

"Dadi Chandro Tomar has tested positive for coronavirus and has been admitted to a hospital due to breathing problem. God protect all - Family," a tweet on her page read..

Chandro was already 60-plus when she picked up the gun for the first time but went on to win many national competitions, even inspiring a Bollywood movie on her.

She is believed to be the oldest woman sharp shooter in the world.

She took part in several competitions along with her sister Prakashi Tomar, also one of the oldest female sharp shooters in the world.

Prakashi also featured in the movie inspired by their lives, during which they broke all kinds of stereotypes, including battling patriarchy.

While the men at home objected to their shooting, they were helped by their sons, daughters-in-laws and granddaughters as they would quietly sneak out of the house to practice the sport in a nearby range.

Once she got hooked on to the sport, there was no looking back as she went on to win medals at numerous competitions, all coming when Chandro was well into her 60s.

Shooter Dadi won many awards in senior citizen category including Stri Shakti Sanman presented by the President of India himself.

She had picked up a rifle by chance, after a younger member in the family expressed her interest in enrolling herself at a newly-built shooting range in their village.

Accompanying their daughter to the range, one day they picked up the gun, pulled the trigger, took a shot and impressed the coach in range.

They welcomed the actresses portraying them in the biopic in their village, where they had stayed for some time and observed their mannerism and tried learned their dialect.