Romelu Lukaku was unable to add to his scoring streak as Inter, who twice hit the crossbar, were held by Shakhtar Donetsk. 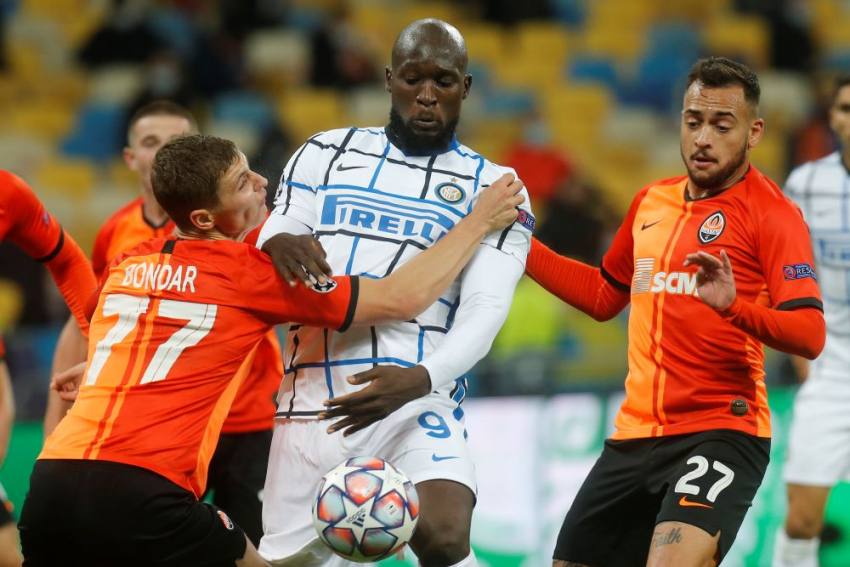 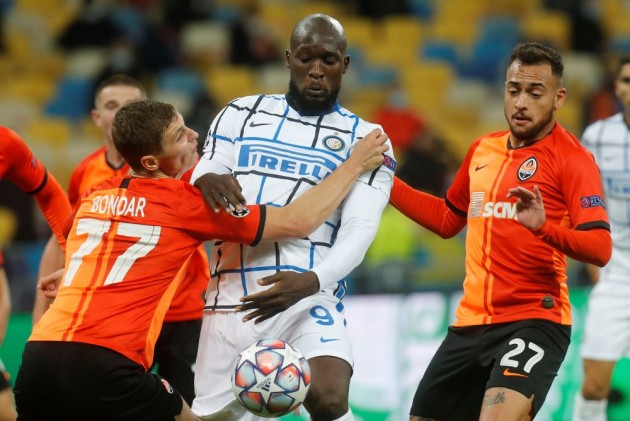 Inter remain without a win in Champions League Group B after they were held to a goalless draw by Shakhtar Donetsk on Tuesday.

Antonio Conte's men thumped the same side 5-0 two months ago in last season's Europa League semi-finals but were unable to find a way through at the Kiev Olympic Stadium.

Romelu Lukaku had scored in nine straight European matches for Inter and came closest to making the breakthrough, his free-kick being pushed onto the bar by Anatolii Trubin.

Nicolo Barella also struck the crossbar in the first half and Lautaro Martinez missed a glorious opportunity early in the second as Inter followed up last week's 2-2 with Borussia Monchengladbach with another underwhelming point.

Shakhtar held on to stun Real Madrid 3-2 in their opening group game but they had Trubin to thank for keeping them level against Inter.

Barella sent a first-time shot against the frame of the goal from the edge of the 18-yard box after Lukaku had been denied by the teenage keeper.

Lukaku was then left with a look of disbelief on his face nine minutes before the interval as his free-kick was kept out by the fingertips of Trubin, who only turned 19 in August.

The chances continued to fall Inter's way as Trubin parried Marcelo Brozovic's powerful drive into the path of Martinez, who fired the rebound wide from six yards.

Lukaku had a penalty shout rejected for a tug on his shirt from Valerii Bondar as Shakhtar, still without a number of first-team players due to a coronavirus outbreak in the camp, saw out proceedings to secure another impressive European result.

A deeply frustrating evening for the Nerazzurri, who are held to another draw in the #UCL#ShakhtarInter0-0#FORZAINTERpic.twitter.com/Ttp6Fn9VtK

What does it mean? Inter held again

Lukaku struck late to rescue Inter against Monchengladbach on the same day Shakhtar picked up a famous win away in Madrid.

With a double-header against Zinedine Zidane's men still to come, Conte's side really could have done with a victory in the Ukrainian capital to register a first win in Group B.

They certainly did enough to win the contest, testing Trubin four times, hitting the frame of the goal twice and missing a glorious chance. In the end, though, Shakhtar – who had just 41 per cent of possession - held on.

Lukaku had scored 11 goals and assisted four more in Inter's last nine European matches, including a brace against Shakhtar in the Europa League meeting.

He was unable to extend that run with his two first-half attempts on target thanks in large to the performance of Trubin, who also kept out Brozovic and Martinez.

Lukaku's near-miss was down to the brilliance of Shakhtar’s keeper, but Martinez's miss nine minutes into the second half was all about terrible finishing.

The Argentina international skewed wide from close range with half of the net unguarded and had just 18 touches of the ball during his 72 minutes on the field - fewer than any outfield Inter starter.

- Shakhtar are winless in their last seven home Champions League matches (D4 L3) since a 2-1 victory over Roma in February 2018.
- This was Inter's first goalless draw in the Champions League since September 2009, when they drew 0-0 against Barcelona.
- Arturo Vidal was booked for a second time in his last three Champions League matches. Since the start of 2012-13, only Sergio Ramos (25) has been booked more times in the competition.
- Shakhtar became only the second team in Champions League history to name starting XI's with as many as seven players aged 21 or younger in consecutive games.
- Aged 35 years and 110 days, Ashley Young became the oldest Englishman to start a Champions League match since Frank Lampard in November 2014 (36y 158d).

Inter host Parma on their return to Serie A action on Saturday before a meeting with Madrid, while Shakhtar face FC Mariupol in the Ukrainian Premier League in three days' time.