While Dutee is likely to qualify for the Olympics on the basis of world rankings, Hima did not start in the final after sustaining a muscle pull during the 100m heats 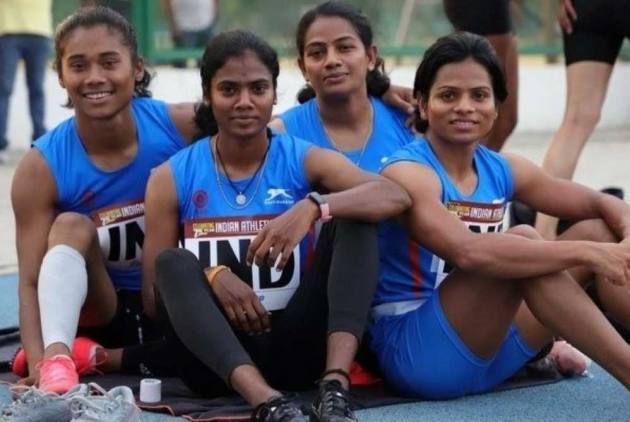 Tamil Nadu's S Dhanalakshmi won the 100m dash at the National Inter-State Championships while national record holder Dutee Chand finished fourth on a day when another star sprinter Hima Das did not start after injuring herself in the heat races, putting her in doubt for the Tokyo Olympics. (More Sports News)

All the competitors in women's 100m final race returned with mediocre timings even as Dhanalakshmi emerged as the fastest woman of the tournament, clocking 11.52 seconds, ahead of Sri Lanka's Amasha de Silva (11.59) and Archana Suseendran (11.60) of Tamil Nadu.

Dutee, who had clocked 11.17 seconds in the Indian Grand Prix 4 earlier this week at the same NIS tracks to shatter her own national record, finished fourth with a time of 11.62. She was seen having some discomfort while crossing the finishing line.

Dutee though is likely to qualify for the Olympics on the basis of world rankings as she is sitting pretty at 41st spot in the Road to Tokyo list. Fifty-six athletes will compete in the Tokyo Olympics women's 100m race.

Hima, who has had a lower back injury problem for a long time, did not start in the final after sustaining a muscle pull during the 100m heats in the morning session. The extent of her injury could not be ascertained officially.

But it is learnt that the Assam athlete is highly unlikely to run the 200m race scheduled on Sunday as well as the women's 4x100m relay final on June 29. She had run her personal best of 20.88 seconds in 200m at the IGP 4 but missed the automatic qualification mark of 20.80 seconds.

Hima's injury is also a big blow to 4x100m women's relay team's qualification bid for the Tokyo Games as she is a vital member of the quartet, also comprising Dutee, Dhanalakshmi and Archana.

Gurindervir Singh of Punjab emerged as the fastest man in the championships as he won the 100m final with a time of 10.27 seconds, a mere one-hundreth of a second below the national record of 10.26 which stands in the name of Odisha's Amiya Kumar Mallick, who finished third (10.49) on Saturday.

National record holder high jumper Tejaswin Shankar's bid for an Olympic quota ended in disappointment as he could clear only 2.20m though he won the gold at the Punjabi Univerisity grounds.

He had flown down from the United States, where he has been studying at the Kansas State University, for a final attempt at making the Olympics, for which the qualifying mark is 2.33m.