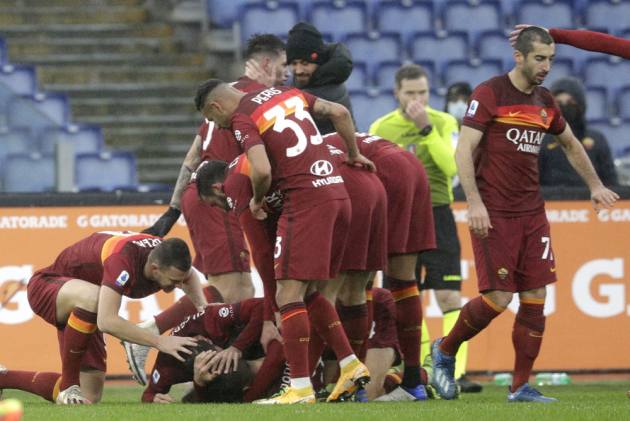 Lorenzo Pellegrini gave Roma a first-half lead at the Stadio Olimpico but Inter roared back after the break.

Romelu Lukaku should have put Inter in front 12 minutes in, but Pau Lopez produced a magnificent reflex save to tip the fit-again striker's close-range header over the crossbar.

It was the Giallorossi who took the lead five minutes later, Pellegrini clinically firing into the far corner from just outside the penalty area after Henrikh Mkhitaryan squared the ball into his path.

Samir Handanovic prevented Jordan Veretout from doubling Roma's lead and although Lautaro Martinez found the back of the net, he had strayed offside during a first half that saw Ashley Young replace injured Inter wing-back Matteo Darmian.

Inter made a great start to the second period and Lopez brilliantly denied Martinez from point-blank range when Lukaku seemed to have put an equaliser on a plate for his strike partner.

There was nothing Lopez could do to stop Skriniar from levelling in the 56th minute, though, the defender rising to meet Marcelo Brozovic's corner with a powerful header.

Roma were unable to contain the Nerazzurri and they were behind midway through the second half when Hakimi took a pass from Brozovic and beat Lopez with a superb left-footed strike that went in off the crossbar.

However, Inter were unable to hang on for three precious points, as they were caught out from a short corner that finished with Mancini diverting Gonazo Villar's delivery beyond Handanovic.

What does it mean? Milan sitting pretty

Ending Roma's long unbeaten home run in Serie A would have served as a statement from Inter, but Mancini ensured it is now 13 without defeat for the Giallorossi.

Conte said facing Roma would be a measure of his side's ambitions and they had as many as 17 shots, looking in command in a strong start to the second half but failing to close the game out.

Roma were content to try to hit Inter on the break for much of an entertaining game, showing character to avoid what would have been a damaging loss.

Inter were unfortunate to find themselves behind at the break, but again proved to be much more potent in the second half.

They have scored only 13 times in the opening periods of 17 Serie A matches this season, but now have 30 in the second halves and it was captain Brozovic who laid on both goals in the capital.

Brozovic made five key passes in another influential display and his 29 passes in the Roma half were more than any of his team-mates tallied.

Lukaku ought to have had at least one goal on his return to the starting line-up, hitting the target just once in six attempts.

Lopez produced an outstanding to stop to keep out the Belgium international's first-half header, but Lukaku really should have given the Roma goalkeeper no chance of denying him.

6 - Before Achraf #Hakimi, the last Inter defender able to score 6 goals in a Serie A campaign was Maicon in 2009/10. Trains. #RomaInter pic.twitter.com/vP0sC2f7uG

- Inter and Roma have drawn six league matches in a row. The previous two sides to share such a streak in Serie A were Napoli and Torino – a run that ended in 1995.
- Prior to Hakimi, the last Inter defender to score six goals in a Serie A campaign was Maicon in 2009-10.
- Inter have scored the most goals by headers (nine) and from corners (eight) in Serie A this season.
- Mkhitaryan is one of the only two players to have provided at least assists and scored at least eight goals in the top five European leagues in 2020-21, alongside Harry Kane.
- Brozovic provided two assists in the same Serie A match for the second time in his career, after May 2018 against Udinese.

The small matter of a derby against Lazio is Roma's next assignment on Friday, while Inter travel to Fiorentina in the Coppa Italia on Wednesday.