Ahead of Sunday's Champions League final, we look at Robert Lewandowski's remarkable season and the Opta numbers behind it 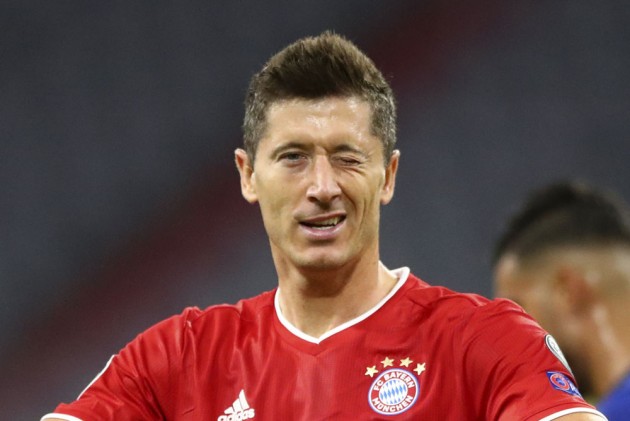 While the idea of seeing super clubs such as Bayern Munich and Paris Saint-Germain lose out to RB Leipzig or Lyon – in the semis or the final – was a tantalising, even amusing, prospect, it's fair to say that Sunday's finale is one that's certainly captured the imagination of the neutrals. (More Football News)

From Bayern's perspective, since the promotion of Hansi Flick to succeed Niko Kovac, a host of their players have elevated themselves to world-class levels, some even beyond that.

Alphonso Davies, David Alaba, Thomas Muller, Serge Gnabry – they have all benefited massively from Flick's management and, as a result, Bayern have been practically unplayable.

But Robert Lewandowski deserves special focus. His quality is nothing new – the Pole has been among the best strikers in the world for almost a decade.

This season, however, it is difficult to think of a player anywhere in the world who has been as impressive, as consistently deadly, as Lewandowski.

Bouncing back to emulate Ronaldo

When France Football announced a little over a month ago that the 2020 Ballon d'Or had been cancelled due to the "lack of a sufficiently level playing field" brought on by the coronavirus pandemic, much of the reaction focused on Lewandowski.

The 32-year-old was seen as the most hard done by following that decision – after all, he'd scored 40 goals in 36 matches en route to helping Bayern to Bundesliga and DFB-Pokal success, while he still had real shot at the Champions League.

Since then, he has taken his tally in Europe's elite competition to a remarkable 15 goals in nine matches, while he's also on five assists.

Lewandowski became only the second player after Cristiano Ronaldo to reach that goals tally in a single Champions League campaign, while in the remarkable 8-2 quarter-final demolition of Barcelona he reached 50 Champions League goals for Bayern in just his 60th outing for the club in the competition.

Again, only Ronaldo can better him in that regard, as he got to the landmark for Real Madrid in 50 games.

Even without Champions League success, it would have been difficult to look beyond Lewandowski for the Ballon d'Or this year.

50 - Robert Lewandowski has scored his 50th Champions League goal for Bayern Munich in his 60th appearance for them in the competition - only Cristiano Ronaldo has reached this total in fewer games for a single side (50 apps for Real Madrid). Esteem. #UCL pic.twitter.com/69rfFJaZwt

Lewy way ahead of Ronaldo and Messi

Lewandowski's exploits in this season's Champions League have been mightily impressive.

His 15 goals have come from 49 efforts, giving him a shot conversion rate of 37 per cent. While that may not be as high as Erling Haaland (53 per cent) or Josip Ilicic (46 per cent), they had significantly fewer attempts at goal (21 and 15).

Lewandowski's shooting accuracy comes in at 78 per cent, dwarfing the respective records of Ronaldo and Lionel Messi at 56 and 68 per cent respectively.

Of course, football boils down to more than just the individual – these players are all directly influenced by the exploits of their team-mates, and few would claim Juventus and Barcelona have been more cohesive and structurally organised sides than Bayern.

Flick has turned Bayern into a team that presses effectively as a unit, which in itself helps to overload the opposition and create openings, while also making counter-attacking chances trickier to come by.

The consequence is more goals and fewer concessions – Lewandowski has certainly benefited in this regard, but it is not all on him.

Of Lewandowski's 34 Bundesliga goals in 2019-20, 27 were scored in the space between the six-yard box and the edge of the penalty area. A further five were from inside the six-yard box.

While many of these goals are certainly examples of Lewandowski's elite marksmanship skills – like when he showed the awareness to chest down a Jerome Boateng pass and finish clinically rather than taking it first time against Werder Bremen – hitting such numbers requires good service.

Lewandowski and Thomas Muller appear to have a particularly effective understanding, with the German setting up Bayern's talisman 10 times this season, with eight of those coming in the Bundesliga.

It seems unlikely that the increase in consistency both players have shown this season is a coincidence, though Flick's ability to get the best out of Muller is arguably the greater achievement given he appeared to be on a downward slide in previous years.

Muller set a Bundesliga record with 21 assists in 2019-20, 12 more than the previous campaign, while Lewandowski's goal haul increased by 12.

Similarly, Lewandowski's expected goals (xG) in the league in 2018-19 was 31, suggesting that he should have scored nine more than he did. This term Lewandowski has scored four more than he would otherwise expect to across the Bundesliga and Champions League – not only is the service better, the Poland star is also taking his chances like never before.

PSG will almost certainly offer a much greater threat than Lyon could, but a team like Bayern shall always create opportunities and at the moment there is no one better in Europe at converting them than Lewandowski, who is hoping to net in his 10th successive Champions League appearance.